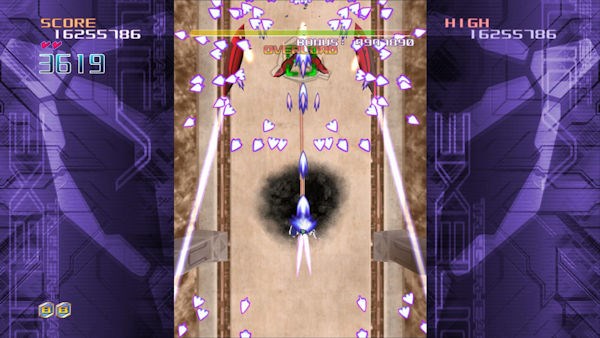 My recent retro-gaming fascination has bought me into contact with a great many classics, and in particular I've been buying up Dreamcast games. One of the games that really caught my eye, thanks in no small part to the amazing artwork, was Trigger Heart Exelica. One of the last Dreamcast games to be made, it's now found it's way to the Xbox Live Arcade, and that means it deserves a meaningful review on UKA!

The game is a standard vertical shooter, with two main characters to choose from (which boils down to spread shots or concentrated) and from then on it's 5 levels of HD action, surrounded by some scrumptious artwork and fine presentation.

Whilst the gameplay itself is fairly formulaic, it does have one unique feature, and that's the lance weapon that either character has at their disposal. It serves 2 functions: firstly, you can lance enemy ships and use them as shields or throw them at other enemies - once you get the hang of it it's highly entertaining, especially when larger ships can wipe out an entire screenful of enemies.
The second function, which only works on the 5 boss vehicles, is to concentrate your firepower on one area - simply lock on with the lance, and then fire like crazy to inflict maximum damage on your selected target.

The game has several modes, the easiest of which is arcade mode. I say easy, only because you get unlimited continues, but using one of these resets your score - so while you may complete the game, you won't be setting the hi-score charts alight. The option of 3 difficulty levels also allows you to test your skills to the max.

Gripes? Well, maybe a couple. Firstly, the classic soundtrack has been replaced, but to be honest I barely noticed. The SE version of the Dreamcast release came with a soundtrack CD, and while I enjoy the cheesy eighties inspired tunes, they don't make much difference to the experience overall, and if anything it means I can play the "classic" Dreamcast version, or the "remix" on XBL.

It's also very easy to finish, but then the people who have complained about this on websites such as IGN don't seem to get the point - shmups like Trigger Heart are about chasing high-scores and improving your game. With 5 levels, Exelica gives me the satisfaction of chasing the top scores in a concise format. If you want a shoot-em-up that will take you several hours to finish, download Ikuraga instead, another classic Treasure shmup available from Microsoft.

Considering the SE Dreamcast edition goes for £80 on Ebay, 800 points on XBLA is a total bargain. As anime inspired shooters go, this is a belter, and well worth your time and money.