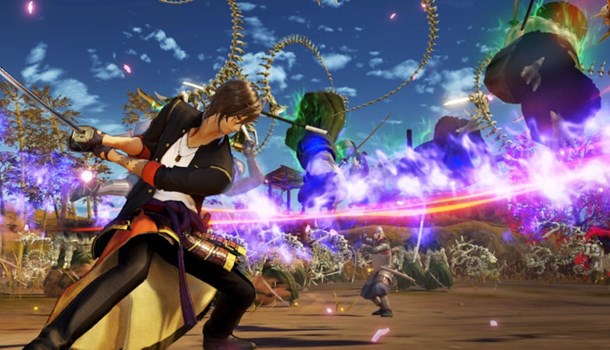 I had never heard of the Touken Ranbu franchise before I was given this game to review. It originated as a mobile game in 2015 and has since been adapted into anime series, stage plays, a live-action film and now a Warriors game. Speaking of Warriors games, I confess that my interactions with the franchise have been rather limited. I do distinctly remember playing one of the Dynasty Warriors games on PS2 when I was younger but my biggest experience has actually come from the two Dragon Quest Heroes games which I enjoyed quite a bit due to the clever implementation of characters and mechanics from the Dragon Quest series. Having established all that, let's take a look at Touken Ranbu Warriors.

Set initially in 2205, 15 Touken Danshi, living incarnations of swords, live at their home, referred to as the honmaru, and they are waiting for the return of their master. However, they are contacted by the Government of the Time to go back in the past, specifically to the Sengoku Period of Japan, to fight against the History Retrograde Army, typically referred to as HRA. The HRA is working to interfere in past events so that a new timeline is established.

While there is a helpful glossary provided in the game to cover terms as well as provide a synopsis for the characters, I couldn't help but feel that I was missing key parts of information. In particular, I never understood why the HRA wanted to change history and what their ultimate goal was. Due to that, as well as the fact that we don't get enough time with each character to fully flesh them out, I couldn't invest myself in the story which felt like we were going from battle to battle aimlessly. I'm sure Touken Danshi fans will get much more out of the story of the game than I did but I can also confidently say that, if you're unfamiliar with the Touken Danshi franchise, this game isn't a good introduction to the series.

If you're familiar with the Warriors games, you probably have a good idea of what to expect from gameplay. As usual, you'll be fighting against hundreds upon hundreds of weak enemies with some considerably stronger leaders/commanders mixed in. I've heard people refer to the Warriors games as "Button Mashers" and while I think it's a bit harsh to reduce the series to that, I also completely understand where they're coming from. You have a standard attack, heavy attack and dodge but you can also equip four special techniques that can be used in battle as well. Additionally, you charge a meter as you inflict damage and, once charged, you can unleash a special attack which wipes out hordes of enemies. You also pick a partner to go into battle with you and they have a separate meter that is also filled by either doing a combo attack which is on cooldown or by inflicting damage. Once this meter has been filled, you can activate a mode where you and your partner fight together inflicting high damage and typically stunning the enemy with each attack. Finally, once the bar has depleted, both you and your partner do a combined special attack which inflicts even more damage than your normal one. It's not a particularly deep combat system but it is passable.

The missions each confine you to a relatively small map and task you with completing a goal within the time limit while avoiding any possible fail conditions. These goals are typically to defeat specific leaders/commanders but they do try to add some variety to these missions by introducing escort missions, defense missions and stealth missions. The stealth missions in particular are clumsy since it's clear that the game isn't designed with them in mind but I do appreciate the attempt. It's also important to note that many of these missions will also have a hidden, secret goal and completing the mission without fulfilling these will result in failure. It's not typically hard to figure out what the secret goal is since you can usually achieve these by exploring the map and listening to the characters.

Speaking of difficulty, this is an area where I have a major issue with the game. It's far, far too easy. As soon as I began playing the game, I could feel that there was something wrong with the difficulty. I quickly set the difficulty to hard but the game still proved to be terribly easy. I would end up throwing myself relentlessly at opponents as I realised that they could do little to threaten me. Having finished the game now, I did fail a couple of missions due to accidently triggering a fail condition but not once did I ever fall in battle.

Between missions, the Touken Danshi reside at the honmaru and you are able to do a couple of things there. First off, you can replay missions that you've already completed, apparently in order to grind experience and resources. At the same time, the honmaru is divided into five rooms and you are able to station Touken Danshi within these rooms in order to develop the honmaru and earn experience and resources. Developing the honmaru is very much a hands off task as it develops merely by stationing Touken Danshi and initially grants you access to more rooms and slots to fill. However, it's purpose quickly shifts to merely introducing new stock in the shop which, while helpful, is very unexciting. You can also spend resources to develop each Touken Danshi via a skill tree and each Touken Danshi is disappointingly similar when it comes to gameplay with hardly any differences. Finally, you have the mini-games which occur after each mission and are, thankfully, optional. Each room has different mini-games which vary depending on whether you have one or two Touken Danshi stationed there. These mini-games are incredibly simple and have absolutely no depth whatsoever, merely serving to give the player small bonuses based on their performance and to pad out the game time.

Graphically, the game is a mixed bag. On one hand, the character models themselves are decently detailed and some of the animations in battle are wonderfully over the top and cleanly animated. However, the environments themselves are quite drab and basic looking and the animation during cutscenes is stiff with some very awkward movement. There is also a startling lack of enemy variety with most of the enemies being either basic demon goons or insectoid looking creatures.

I do confess that I actually do quite like the soundtrack to this game. The battle music captures the historical setting quite well and is quite exciting while the rest of the music, barring the look at this goofy situation music which I can't stand, is also very well composed. The voice acting is restricted to Japanese and most of the cast give decent if not particularly memorable performances but I do deplore the lack of subtitles during battle intros and special moves. It also doesn't help that character conversations in battle are relegated to a small section of the corner and are easy to miss during battle where the various sounds of enemies can drown out the voices before you realise to look up at the subtitles.

I played this game on PC and have a few notes to make on that front. Koei Tecmo is not known for making particularly good PC ports and, when I started the game, I was quite shocked to see that it had opened in windowed mode and had no options on the main menu. Thankfully, once you start a new game and access the main menu there, you can access options and I was able to set it to 1440p borderless. However, there is one single graphical preset of low, medium or high and the game is locked to 60fps. There are also some pre-rendered cutscenes that seem to be rendered at a much lower frame rate which I found distracting to watch. With regards to any other PC issues, I did experience one crash which forced me to replay a battle and one cutscene had an audio hiccup where the buzzing sound of a slain insectoid opponent continued to play but I had no other problems.

If you're a fan of the Touken Ranbu series and you enjoy the Warriors games than you'll get much more out of this game than I did. However, I ultimately found Touken Ranbu Warriors to be quite a dull and uninspired game and, while it's certainly not terrible, I would strongly recommend against people unfamiliar with Touken Ranbu picking it up.