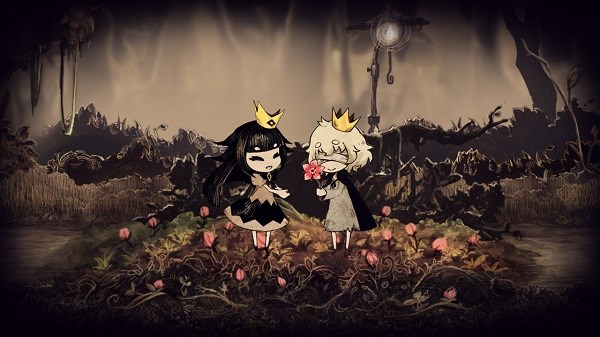 The Liar Princess and the Blind Prince is a side scrolling platform game with puzzle elements where you play as a Wolf that can transform between her large monster form and smaller more human sized princess form to guide a prince from one end of the level to the other. The player will make use of the two forms of the princess as well as giving direction to the blind prince in order to solve various puzzles along the way.

The story of the Liar Princess and Blind Prince is presented as fairy tale style like story book. The Liar Princess is actually a wolf that has a beautiful singing voice. The prince hears her singing in the forest and upon going to investigate is accidentally blinded by the wolf when she gets startled by his sudden advance towards her. Feeling a great amount of guilt and remorse for her action she makes a deal with the witch of the forest in order to let her transform into a human looking princess in order to gain the trust of the prince, with the hope of leading him into the forest to visit the witch in order to restore his sight. This wish comes at a great cost though; the wolf must give up her singing voice in order to be given the power to transform between the princess and wolf. She accepts this and thus begins a journey with her leading the blind prince by the hand through a monster inhabited forest in order to restore his sight.

The first thing that jumped out to me about the game was it's beautiful art style. As said earlier it looks like a story book and has a very fairy tale like feel to it. However things also have a dark tone thanks in part to the use of rather muted colours and heavy outlines on the characters. There is a lot of use of blacks, whites and earthy tones to give the game a rather gloomy feeling in its art. Tied into this is the music giving a very wistful feel to it which in turn ties into the main theme of the game.

That theme being the feeling of guilt and the steps someone will take in order to redeem themselves and seek forgiveness. This is shown through the various conversations that the princess and prince have throughout the game. With her feeling guilty for blinding the prince but also at the same timing feeling guilty about having to deceive him in order to lead him to a place that can fix her mistake. Also tied into this is the theme of not judging a book by its cover. Shown through several moments where the princess and prince interact with the forest creatures. The prince being blind can't see what the monsters they meet along their journey look like so treats everything as if it were human. While the princess being a wolf monster herself sees what they are interacting with and contemplates on how the prince would react if he found out what she really is.

The story itself is narrated and voice acted with a Japanese voice cast. Using still frames that really highlight the story book feel to things. Its art along with the story gives it a lot of charm. The story itself is rather simple and easy to follow and at times takes a few predictable turns but it has real heart and an earnest quality to it that makes the characters seem rather fragile honest and warms you towards them.

With regards to gameplay the game itself acts as a side scrolling platformer with a large emphasis on puzzle solving. The princess in her human form needs to hold the hand of the prince to guide him through each level. The player takes direct control of the princess but is able to give commands to the prince such as to walk to the left or right or to pick up/drop an item in order to carry it and place it down on switches. The princess can also activates levers and press buttons in her human form. In this form she is exposed and vulnerable. Like the prince, she can take damage and die from monster attacks and can suffer fall damage. The prince and princess can die in one hit.

As the wolf however, things are different. The princess in wolf form can jump higher, is immune to fall damage and can attack enemies. Thus clearing away the path for the prince. Also tied into this are certain puzzles requiring a certain amount of weight to be applied. In the wolf form the princess is twice as heavy and whilst standing on a platform with the prince can break it as it cannot take that weight. The game allows the player to instantly switch between both forms at the press of a button except for a few times where the game won't allow a change or when there is not enough room for the wolf to come out.

With regards to the puzzles. Things are fairly simple. There are puzzles that make use of having characters stand on switches, where weight is involved in some working out a few simple logic/maths based riddles here and there. While things are simple most of the puzzles require a fair bit of trial and error to get things right. Mainly due to deaths from falling/missing a switch or dying at a monster. Nothing is too difficult and the puzzles themselves are fairly straightforward. The game itself plays fairly well with my only complaint being about how precise the prince needs to be directly over a block to pick it up. A few times I had to issue the command for this but quickly learned where he needs to be. Also the game is fairly short with around 20 or so stages and can be finished in about 3-4 hours. There are collectibles in each stage and challenges to get through each stage under a certain time or to finish the stage without killing any animals which provide a bit more challenge.

Overall though The Liar Princess and the Blind Prince is a charming little game. Short, sweet and worth checking out if you like the story book aesthetic and this type of puzzle platformer.