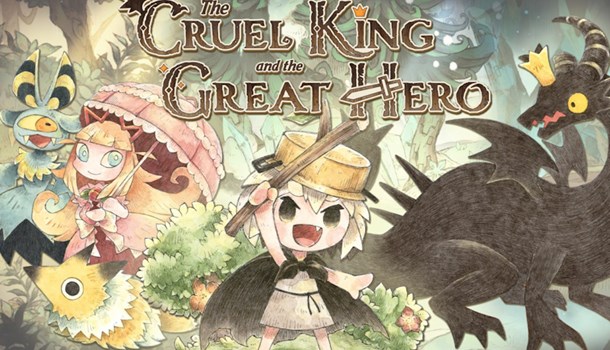 The Cruel King and the Great Hero was produced by Nippon Ichi Software, It was released on Playstation 4 and Nintendo Switch on the 11th of March 2022. It's a JRPG game with some puzzle elements.

Right, before I get into game review proper, I’m just going to say this; if you in a bad place mentally or emotionally, this isn’t the game for you, the main plot can get very depressing in points and in one of the side quests (spoiler) a character straight up dies of old age. If that’s going to upset you in anyway, just don’t play it. 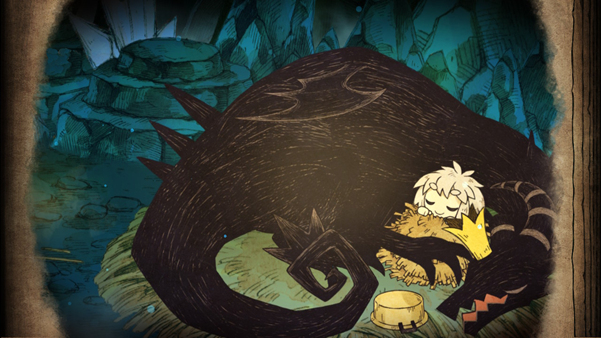 Do not be fooled by the cute. You will cry.

The story is set around Yuu, a small child who lives with adopted father the Dragon King. Each night before she goes to sleep, the Dragon King tells Yuu the story of her father the Great Hero, who once defeated the evil Demon King. Yuu wants to be just like her great father and has begun training, so if the Cruel Demon King were to ever arise again, Yuu will be ready for him. But in a plot twist (not really, it's literally in the trailer), the Dragon King IS the Demon King and he’s planning to let Yuu kill him so that she will be the next Great Hero, which is super messed up.

As the game continues Yuu makes friends with Rocky the fox, Cybat the bat and Flora the human princess, who as their stories are introduced join your party. Only one character can join Yuu at a time, which up until chapter 7 is out of the player's hands anyway.  Yuu also makes friends with the local monsters who live in the aptly named monster village, as well as those found beyond it by completing side quests or performing ‘kindnesses’ for them. 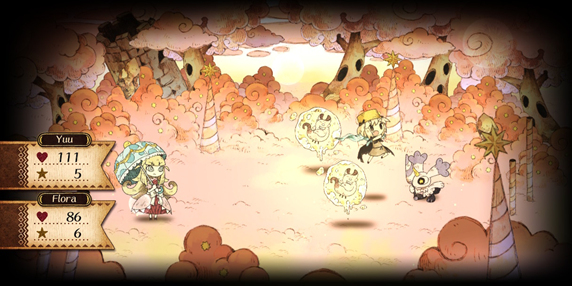 Sometimes you are attacked by ‘Unborn Children’. No, I don’t know why.

The game play is a basic turned based RPG and can be quite hard, especially at the beginning and in-between chapters, when the player doesn’t have a partner to back them up. I died a couple of times near the beginning because I tried to fight three enemies off on my own. As I’ve said above, you only get one extra character in your party, and until chapter 7, you don’t get to pick which character that is. I found it was better to start playing the chapters up until I was given that chapter sidekick, then going back and completing the side quests before properly starting the plot for the current chapter. The game is quite unforgiving, and I have fought up to six enemies while only having Yuu and her chapter's plus one to fight, which seemed unfair and quite peculiar. If the technology is there for the enemies to have six in a party, why is the player party limited to two? It doesn’t make sense to me.

The game also has basic stats; attack, defence, speed and evasion, which can be increased with items/levelling up or lowered by enemy attacks. You also have your stamina points, which are your health points, so if your stamina is low use a health item. Magic points are depleted when using a magic or special attack. In battle you have choices; you can fight, run, use an item or guard. After each round you gain one magic point, unless you used guard, which will give you an extra magic point. With items you have health/status changing items that will increase your health or one of your stats as well as attack items that you can throw at the enemy.

All enemies have weaknesses that leaves them open to increased damage, to find these you can use ‘survey’ in Yuu’s magical attacks. This won’t use any magic points, but it will use up Yuu’s turn. Another thing to remember is that if you are running, you are less likely to be attacked, but when you are it will be by stronger enemies. If you are walking, you are more likely to be attacked, but when this happens it will involve weaker enemies.

Enemies do not drop upgrades, apart from the treasure chest enemies, most drop health items, which is good as you will need them. Upgrades come from treasure chests, some of which you are only able to get with different characters, you need Rocky to get the buried chest, Cybat to get chests suspended in the air and Princess Flora to get chest that are over a canyon.

This means you often must go through levels three times to get all the chests which is very frustrating. 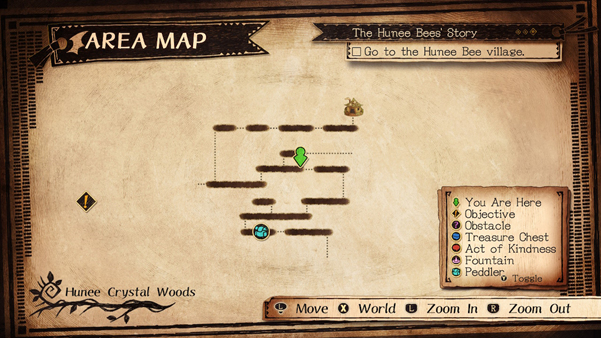 The map, choosing to be only sort-of helpful.

Apart from the RPG element, there are some mild puzzles too in the form of the map. The map will show you an exclamation point to show where you need to be generally, but the map won’t show you the paths until you are further along, meaning that you often have to double-back to find the right path to your intended destination.

The graphics in the story are hand drawn animations, which gives the characters a unique charm, but the backgrounds are often a repeat of the same scenery, so that charm is lost when you’ve walked through it about seven times in a row, akin to the old cartoon jokes of using a revolving background. Between this repetition and the map's antics I got quite irritated at times.

In general, the characters reminded me a bit of the characters in ‘The Sleepy Princess in the Demon Castle’, then I met Princess Flora, and I was really remined of ‘The Sleepy Princess in the Demon Castle’, the plot about a Demon King trying to upgrade the Hero to be able to fight him is also similar to TSPITDC. I did like that when you found new equipment, for Flora in particular, that the animation would change in battle to show the upgraded weapon/clothing. 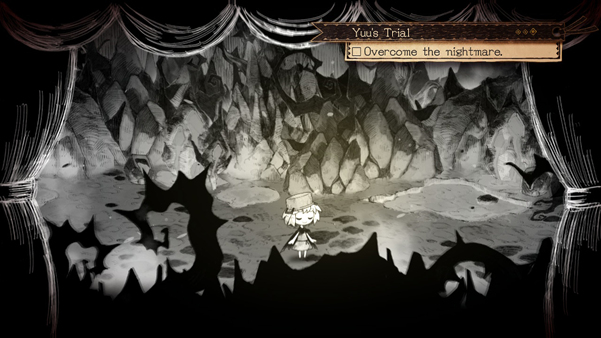 Hands down my favourite chapter.

The music was fine, mostly background noise that is unobtrusive to the player, until chapter 6. This is the "darkest before the dawn" chapter where Yuu must face herself and what she has done to lead her to this point. Yuu has to face five trials, with the between trials location completely silent, to the point of being jarring. The music is the level music for the area of the game it reflects, but it is as if that the music has been played through a tin can. Combining this odd sonic arrangement the shift to black and white graphics creates a creepy atmosphere that is very effective.

There are a few problems with this game that I have to address. In the nit-picking department, I find it very irritating that you can’t see how many points I need to level a character up - subsequently you don’t know if you should give the character a health item or not because the stamina/magic points are reset when you level up. Because of this I wasted a lot of health items.

The points system in general is also a bit messy - the player's party has stamina points while the enemies points are a three heart system. Why not just use stamina points for everyone? This is just confusing! When you’re fighting a boss, you don’t get so see their health at all, not even in hearts. The game shows you how much damage you’ve done, but not the enemy's stamina, so you have nothing to judge against. Taking 137 in damage could be good, but it could also be nothing to the creature you're battling. I just don’t get this decision.

Plot wise, it is a bit unbalanced. For example, at the beginning of chapter 4, it is mentioned that the Dragon King has the previous Great Hero’s sword, and that it is broken. The sword is fixed at the end of chapter 4, so this just seems like a huge missed opportunity. There could have been a whole arc about finding ingredients (you do this a lot in the main plot and side quests) to fix the sword, having the Dragon King getting more anxious/depressed as the sword is closer to being fixed, but no - the plot point comes in at chapter 4 and is almost instantly fixed.

The only glitches I found were to do with lagging. When you go to the screen to save your game, it lags before the save screen come up. The first few times this happened I though I’d broken it! There are also lagging problems around one kind of enemy - they are like little bug creatures who attack by flying around your head and give you a status ailment (freezing, burning, poison) sometimes they just keep flying around your head for about 20-30 seconds without attacking. This worried me the first few times, then it just became irritating.

Overall, the Cruel King and the Great Hero was okay. Not great, but it had potential. I’m not sure who it's for either - the game is rated E, but there are some themes that could be upsetting for younger players, despite the general feel of the characters appearing to be aimed at a younger audience. The whole ‘murder your adoptive father’ plot is quite an emotionally and ethically packed theme. I don’t know, it feels like a game cartridge that would have gone ‘missing’ like my Bambi VHS, but maybe today kids are made of sterner stuff. I think if you’re playing it for the story, the number of samey backgrounds might be frustrating, but if your just playing 30 minutes here and an hour there, it could be a fun time sink.