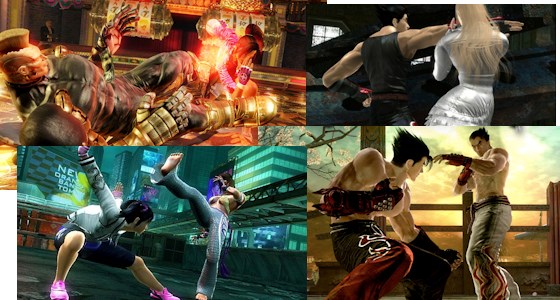 I have 3 experiences with Tekken. The first was the second game on the PS1. I only had a demo disc, and at the time my preference was for Soul Calibur, which presented a more interesting form of combat complete with collectable weapons and alternate outfits. Tekken seems a little staid by comparison, and although I enjoyed the time I had with the demo, it never grabbed me enough to warrant a purchase. Of course, as a teenager, my funds were a lot more limited.

I returned to Tekken with Dark Ressurection on both the PS3 and PSP, at which point I was mature enough to "get it". Tekken is a wonderfully tactical game, and requires a great deal of skill to master. The action has a balletic quality which other fighting games seem to lack - there's just a sense of realism you don't get with the likes of Soul Calibur or Street Fighter.

So Tekken 6 arrived on my doorstep much to my surprise, and I can confirm it's certainly the best Tekken yet. A stunning 42 character roster, plentiful game modes (including a campaign mode, which is a bit of a nonsensical oddity), deep customisation options to rival Soul Calibur and a belting online mode which lets you pit your skills against other players.

To back up the variety, the game looks stunning. All of the characters look and feel very solid, and the dazzling array of customisation looks seamless. The backgrounds are varied and interesting, and it's probably the closest you'll get to having what looks like a "real" fight within your TV set this generation.

Tekken's physics are also surprisingly weighty. As someone who's used to playing fighting games that break the rules of physics, it's amazing how grounded this game feels. I haven't felt this kind of heft since Arkham Asylum, and it makes a change from super-powered jumps and fireballs.

There's a very deep tactical edge to Tekken too, which is going to divide some newcomers. Where fighters such as Blazblue or Street Fighter rely on fast paced gambits and counter-hits, Tekken requires you to string your combos together in unpredictable ways - if your next move is too obvious, the AI WILL block you and turn the tables. This requirement for almost random tactics makes it possible for complete n00bs to button-bash their way to victory over experienced players, which can be pretty frustrating. However, get two skilled combatants together the game becomes a thing of beauty.

For we anime fans, the highlight of the game has to be the new android character Alisa. If you've watched She: The Ultimate Weapon, you'll have an idea of how much fun you'll be having with a girl who sports booster rockets and combat-chainsaws! When she hands her head to an opponent so that it can act as a bomb, you know the developers were having as much fun as you are.

Tekken's only weakness is it's lack of spectacle. Don't get me wrong, the good-looks and destructable environments are very sexy indeed, but it lacks the speed and the style of Street Fighter IV or BlazBlue, but if you can get past the flashy alternative offerings, Tekken 6 is a game of real depth, flexibility and character that should keep the hardcore slap-happy for months to come.

9
Tekken 6 is a mature, heavyweight contender that punches above it's weight and enters the hall of fame for fighters in 2009