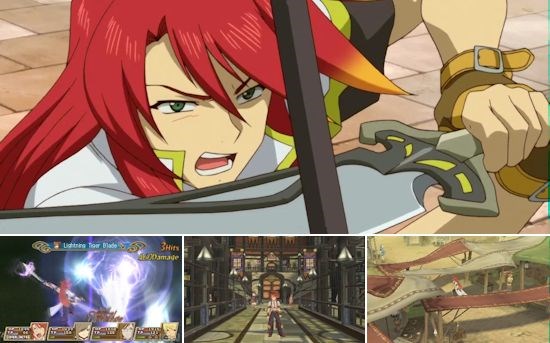 Tales games are a dime a dozen over in the land of Japan, but here in the UK we see very few versions of these games make it to our shores. The last Tales game we saw was Tales of Symphonia: Dawn of the New World released on the Wii back in 2009. So, with Tales of the Abyss being the first official Nintendo 3DS JRPG, how does it hold up to its contemporaries?

Well, the first thing to note is that Tales of the Abyss is not actually a new game. It's a port of the PlayStation 2 title that was only released in Japan and America back in 2005 and 2006 respectively. I would imagine there are a million and one reasons why it wasn’t released in its original format, but we won’t go there for now. The question is how well does a six-year-old game stand up on one of the latest formats? The answer, thankfully, is that it stands up quite well.

If you are familiar with Tales of Vesperia or Tales of Symphonia, then you have a very good idea of what to expect here. Lush anime-styled graphics, a real-time battle system and as many JRPG clichés as you can wave a stick at. It’s all here in spades, complete with plenty of voice-overs and presentation you would expect from a home console release. The lack of Japanese voices is a disappointment, but considering the size of the cartridges not exactly surprising. The “skits”, optional conversations, don’t sport voice-overs either, but looking at PS2 reviews this was the same on that platform anyhow. Adding in voices for these would have been nice, but looking at how many there are, that would be somewhat unrealistic.

Gameplay-wise, Tales of the Abyss is easily one of the better JRPGs that we've seen for a while. I'm personally more of a fan of real-time battle systems and, while it can descend into a button-mashing affair at times, during harder enemies and bosses there is a fair amount of skill to be used, especially when breaking away from the 2D plane as required. Although I still refuse to call the battle system “Flex Range Linear Motion Battle System”... it doesn’t even make a good anagram.

Also thankfully, rather than having a very slow, plodding beginning, after the first tutorials the game does kick up into a higher gear very quickly. It does have a habit of telling you basic gameplay mechanics in great detail, but when it comes to more refined gameplay elements the game decides it’s best for you to figure them out yourself, although it may be best to have a guide o- hand for those sections. The one issue that has been brought over from its home console heritage is that save points can be few and far between, which on a handheld can bring up some problems when you need to stop playing or are running low on battery.

At the end of the day I could sit here and pick holes in the port, such as the washed-out look of the graphics at times, the CG videos that the 3DS says are in 3D but they really aren’t and the rough-edged character models, but the fact is that even after all that I still found the game to be a compelling experience and needed little encouragement to keep on playing. It is a nice, easy introduction to JRPGs for those that aren’t familiar with them, and even for those that are there is still plenty here to keep them going for a long time. The 3DS exclusive additions for this port are minimal at best, and while the 3D can help in battles the rest of the time it adds little to the experience and you will more than likely switch it off to save on battery life.

Tales of the Abyss isn’t going to be winning any originality awards for its story with, complete with annoying protagonist with an amnesiac past and the path to be a hero laid out for him, but it does entertain and for a console that is screaming out for new games beyond the usual Mario and Zelda staples, you'd be hard pressed to pass this one up.

8
An entertaining first entry into the JRPG genre for this handheld.
LATEST REVIEWS