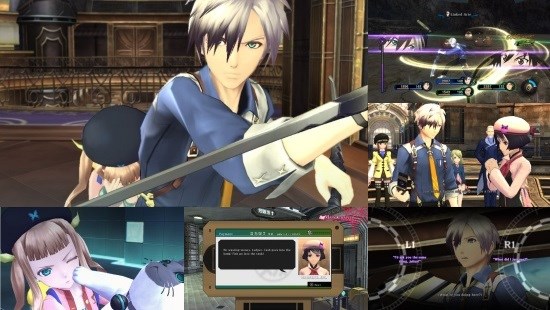 Taking place one year after the events of the first game, Tales of Xillia 2 now revolves around new main character and 'near-silent protagonist Ludger Kresnik. After having his aspirations of becoming an agent dashed, Ludger reluctantly becomes a chef in his town's train station cafeteria. However, a chance encounter with a mysterious young girl gets him involved in a dangerous situation aboard a train. The result of their escapade lands Ludger with an extremely high debt that he must pay off. Luckily Ludger gets some help from some familiar faces and is enlisted as an agent to help destroy fractured dimensions. If left unchecked, these fractured dimensions could wreak havoc on the prime dimension. Thus, Ludger unwittingly gets involved in journey with several worlds in the balance.

Being a direct sequel, Tales of Xillia 2 lifts quite heavily from it's predecessor. The first thing to note is the reuse of the battle system and background locations from the previous game. While the environments from the previous game are reused they are gated off in a very contrived way, which ties into the debt that Ludger finds himself in at the beginning of the game. While serving as a plot device, it also becomes a gameplay mechanic that dictates the plot progression and pacing of the game. The game is divided into chapters that can only be accessed when a certain amount of debt has been repaid. The debt can be paid at any time by accessing the menu but once a certain amount of money is in the players inventory they are called up and forced to make a payment. At first these payments can be easily met by doing a few side quests to make money. However, as the game progresses the amount escalates to the point where the minimum repayment amount to advance the story requires a lot of side quest and money grinding.

While the amounts may seem steep at first the game does offer a lot of content to help fund the endeavour. Tales of Xillia 2 introduces random jobs that can be undertaken from job boards in each town, while character specific side stories and hunting monsters offer valuable money rewards and items. This in turn ties into the exploration aspect of the game. With each repayment of Ludger's debt new areas are opened up - however, most of the story content doesn't use the majority of the environments but the side quest and jobs do. This means that undertaking a job incentivises exploring these areas by having a request made for certain items to be gathered from them, or promising monsters in that area to be eliminated. Also within these areas are items to collect and gather, most of which will be used for jobs to get money. However the game also introduces another mechanic to go along with the exploration: hunting cats. Each area has a set amount of cats hiding there, and once a cat is found they can be used to gather items. These items range from job items to unique weapons and pieces of equipment. When sent to scout an area the cats make use of the console's system clock, meaning that they search in real-time, and there are also certain bonuses depending on what day it currently is. Some days provide bonuses for item amounts or areas and can even reduces search time.

While these mechanics do offer a lot of help to acquire money, at times it feels like all of the money is going towards paying off debt rather than being used for items. This is especially true for the earlier sections of the game where the job rewards aren't as lucrative and the amount to pay off is small enough to hit fairly quickly. That said, the mechanic for paying off this debt regularly provides access to bonus items as a reward, including new skills for characters.

The side quests that the player can participate in have character specific stories, which will often force the player into a party with pre-set characters that can't be changed. Normally this would be an inconvenience, but Tales of Xillia 2 has such a diverse line up of characters that can balance out a party that it doesn't hinder game play too much. When the stories are done they give rewards usually new pieces of clothing equipment for the character who was the focus of the side story. Seeing these stories not only does a bit of character building but allows the player to increase Ludger's affinity with each character through the use of dialogue choices.

Dialogue choices play an important role in Tales of Xillia 2 - as mentioned previously, certain dialogue choices can increase affinity between Ludger and a certain character, and within the main story they affect how a scene plays out, although it is often the case that each scene will have the same overall outcome but the way characters react and what they say will be different. For the most part the dialogue choices don't have any bearing on the story until near the end, where certain choices will result in one of the game's multiple endings. Therefore it is important to note that the choices not only affect affinity but ultimately how the game will end.

While Tales of Xillia 2 has added new features, it's also retained and changed some from the previous game. Those who played Tales of Xillia will feel right at home with how the game's battle system works. Like the previous game, players can link two characters together in order to use special attacks and character-specific battle skills together, although this game throws in some new concepts which all revolve around using Ludger. The first is that Ludger can switch between three different weapons in mid-combat, moving between dual blades, a hammer and a pair of guns. Each set of weapons has their own set of special moves and linked attacks that can be performed. Also the game has certain enemies weak and strong to each type of attack, adding in a bit more strategy and incentive to use the different weapons. Ludger also has access to a special transformed state known as Chromatus. While in the Chromatus, state Ludger fights the enemy alone with infinite health but with a constantly depleting gauge. This also gives the player access to a new move set of special attacks. Once activated, Chromatus needs to be recharged to use again, although thankfully it refills over time when in battle.

Another feature that has gone through a redesign is how skills and artes are learned. The new system is known as the allium orb. This time the player equips characters with nodes that have specific elements attached to them. When the points gained from battle reach a certain amount for an element or combination of multiple elements, a skill is learned. Luckily, when equipped it shows what skills can be learned. As the game progresses the player can buy new nodes or unlock them through jobs. The newer nodes have different combinations and stronger levels of elements which allow more points to go into these elements quicker. While a rather simple system at first glance, the problem with Allium is that only one character can equip one of the nodes, leading the way into constantly checking the menu to see which character is learning which skills and planning accordingly. At times it also feels like some characters are at a disadvantage due to being given the lesser quality nodes, while others are using the stronger nodes with more elements. In turn it can also feel like some characters are missing important skills or unlocking lower tier skills later than they are supposed to due to how they've been managed. While the Lillium orb from the previous game had what felt like a more customisable system, this one just feels like a step back.

Another flaw regarding the game is it's presentation of the fractured dimensions. Most of the time a strange filter is used to show a different dimension - however, this makes the colours duller, the screen blurry and is just plain unappealing to look at. This may be done to remind the player that the world is different, but these areas are only accessed during missions, during which there is an indicator on-screen in the top right corner to remind the player they are on a mission anyway. While not bad looking to the point of the game being unplayable, it certainly makes this segment of the game look worse than the rest of what it has to offer. While the game does re-use assets and characters from the previous game, it manages to expand the world a bit more and give depth to the characters. The trademark skits make a return, which also ties into Ludger's choice mechanic, giving each skit a few possible paths, potentially leading the way into some rather comical exchanges between the characters. Along with this the story of the game provides a good amount of twists and turns that really sell Ludger as a sympathetic protagonist.

Tales of Xillia 2 may be more of the same due to its reuse of environments, characters and systems but its story, character interactions and new mechanics do enough to liven up the experience and provide a fun and interesting RPG. While the debt aspect can hinder the flow of the game and the fractured dimensions affect the visuals, the rest of the game makes up for these shortcomings. If you played Tales of Xillia, it should go without saying that you should definitely play this.

8
Tales of Xillia 2 may offer more of the same as its predecessor, but still does enough to provide a great RPG experience.