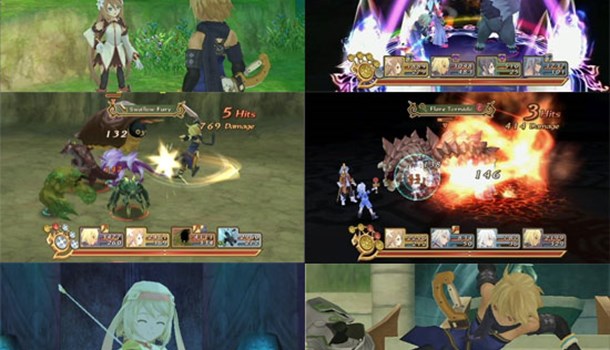 It’s not often you get direct sequels to a popular RPG series. Sure, Final Fantasy is hitting thirteen soon but apart from the girl power of Final Fantasy X-2 and the constant churning of the FF7 mill, each game is based within its own universe. Some prefer this as they feel constant sequels will dilute the experience, which brings us to Tales of Symphonia. The Gamecube game was considered one of the 'Cubes best RPGs, so does the Wii sequel add to the legacy?

Dawn of the New World follows on two years after the events of Tales of Symphonia. The world has been saved and rejoined and the cast of the original game are hailed as heroes. What wasn’t foreseen was the divide between the two peoples of Tethe'alla and Sylvarant, as well as the destruction of the world tree bringing unbalanced weather, environmental effects and constant monster attacks. Marta, a girl with a special gem, is seeking to restore the balance by awakening Ratatosk, lord of monsters, who should stop the monster attacks and fix the disastrous weather. A young orphan boy named Emil soon joins her in exchange for the power to avenge his parents' death committed by the lead character of the original, Lloyd Irving.

So far, so very RPG. The story is perhaps helped along by the later inclusion of the original cast in different places; the main cast however is something of a hit and miss affair. Marta is an excitable girl who is looking to save the world and is using what she can to reach that goal. While not too original, she at least differs from a fair few other RPG heroines. Emil on the other hand is a whiny spineless arse, who for a novel gameplay feature the player should be allowed to slap by waving the Wii Remote everytime he says sorry. He embodies the annoyances of most RPG characters and rolls them into one. While he does improve as the story goes on, you do wish he would shut the hell up at times.

The gameplay itself is a real-time combat system with the character taking on the monsters with either other characters or monsters the player has captured and levelled up. A sort of Pokemon "gotta catch ‘em all" vibe starts to seep in when entering a new dungon, wondering what you can capture. It makes the game stand out from most usual RPG combat systems and makes you think which creatures to use when and where. As for the rest of the combat, it is pretty much the standard that is to be expected from Tales games and should you be a fan you will get right into it.

Presentation-wise there are a few issues that arise. After the magic of Tales of Vesperia, it’s a bit disheartening to see that Dawn of the New World’s graphics aren’t remarkably different to the original. Granted the Wii isn’t an HD console, but it does pack more graphical grunt than its older brother and we should be expecting more from it. There are even cases where assets from the original game have been reused, though slightly touched up. Voice acting is the usual standard that we have come to expect from this type of RPG, and while Emil does grate after a bit, everyone else is done well. There is no option for Japanese language, but the English won’t have you ripping your ears off anytime soon. Also the skits make a welcome return and while optional, they are worth listening to when you can, even just to raise a chuckle every so often.

It is pretty obvious what is going to be said here in conclusion: If you are a fan of the Tales series of games, the original game or RPGs, then Dawn of the New World will tide you over, at least until Final Fantasy XIII. For those looking to dip their toe into the RPG waters, then there are better offerings to try such as Eternal Sonata and even the wonderful Tales of Vesperia, which also comes with the added bonus of requiring less Wikipedia backstory reading. While it will not set the world on fire, it remains entertaining in it’s own right.

7
Fans will enjoy continuing the story, but this won’t bring the average RPG player to tears
LATEST REVIEWS