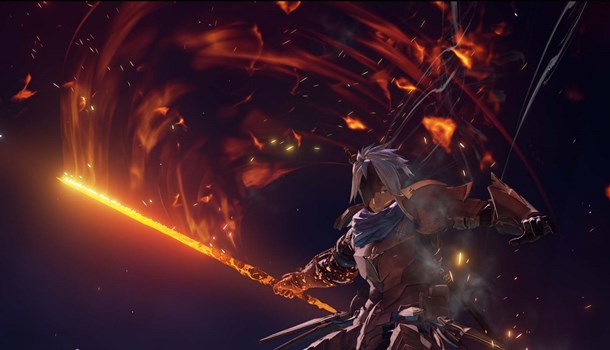 As the 17th Mainline entry in the Tales series. Tales of Arise has the dubious honour of being the first Current console entry of an RPG series that has spanned over multiple console generations over the course of 25 years. The question is; does this game live up to the task?

Undoubtedly so; Tales of Arise is a monumental RPG. Not just as an entry into such a well established franchise but as an RPG in it's own right. Tales of Arise is an action RPG that focuses on dynamic and fast paced battles with a cast of 6 distinct characters battling weird alien like monsters known as Zeugles. Monsters created by the citizens of Rena in order to aid in their subjugation of the people of Dahna. For 300 years prior to the story the twin planets of Rena and Dahna have been embroiled in a conflict started when the planet of Dahna was invaded by the Renans. The Renans used their superior technology and natural ability to use artes to enslave the Dahnans in order to gather astral energy and harvest the natural resources of the planet Dahna so that they can fuel their lavish lifestyle. The story picks up when a chance encounter between Alphen, a Dahnan slave who has lost his memory and is unable to feel pain meets Shionne, a Renan who has the cursed power of thorns that causes anyone who touches her to feel pain. The two form a pact in order to rebel against the tyrannical system in place with the goal of overthrowing the Renan lords of each area of Dahna, hoping the liberate the slaves of Dahna from their cruel oppression. 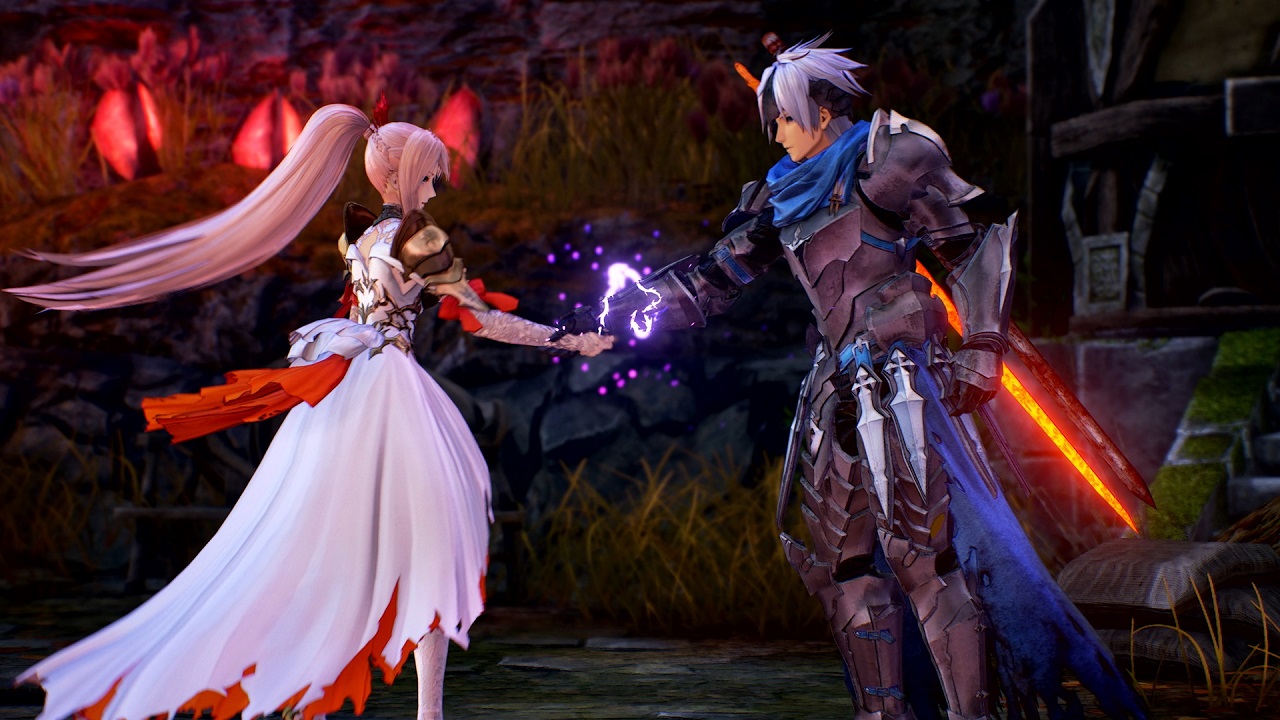 Tales of Arise wastes no time in getting the story into motion. Things start off at a break neck pace and it somehow manages to keep up this momentum throughout its entire story run. The game revolves around Alphen and the companions he meets along the way travelling the world of Dahna in the hopes of liberating each area that is being controlled by a different lord that has an affinity for each of the classical elements. Whilst on their journey the game portrays quite the heavy themes of social commentary. We see the effects that oppression has on the people of an area whilst also getting commentary on what it means to move on past such trauma, learning to live a new way of life and reconciling with the past in order to move forward. As far as themes go; things are really heavy especially with the portrayals of the various methods used to rule over each area. With fear, overwork and total control of a populace coming to play. The game walks a dangerous tightrope with what is shown at times but thankfully manages to reign things in thanks in part to the cast dynamics.

A series stable; skits make a welcome return. These are moments when characters will talk about various things. In Tales of Arise they take on a visual comic style with panels appearing on screen with characters moving in certain ways, then fades those slightly to brighten up and display the next panel. At times these small moments bring a bit of levity to proceedings by making jokes about certain characters personality, motivations or thoughts. But mostly these moments are rather reflective with showing the player what certain characters thought of events that have just transpired. Tied into this is fleshing out some characters and giving them motivation and back story. While most are comedic some also have a twinge of sadness. One poignant one is the other characters commenting on how one character loves to fish with said character agreeing they love to fish and realising they first took up fishing as a child slave in order to eat properly as their Renan assigned rations were never enough to stop them feeling hungry. Its the small moments like this that really reinforce the central theme of the game that we are dealing with oppression and slavery. 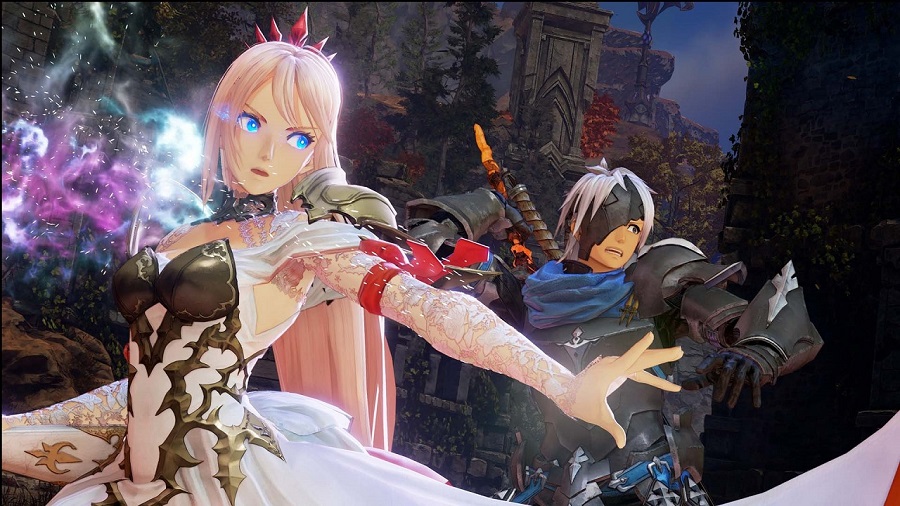 Tied into this is the aspect of the characters being a team full of people from both sides of the conflict. At first things start off tense between them. Even going as far us to use insults and to state their distrust of each other. As time passes and they interact more we see the small changes between them. This in turn really endeared me more to the characters, they start off saying cruel things to each other for various reasons; most of which can be justified to some extent but as time goes on they realise the error of their ways and work towards growing as people in the hopes that some day they can hope others can get along. This is also a big theme of the game. Others working together. Letting the past go and working against fighting their fate in the hopes of creating a new world together. With recent world events making people feel more divided than ever its good to see a piece of media that teaches others that working together is the best approach. Tied into this we also have commentary on motivations, whether or not the initial reason for someone doing something is terrible even if the desired result is good and vice versa. The game plays a lot with this concept as mostly the Dahnans see all the Renans especially the lords as evil with their actions not understanding the motivations some have for controlling things they way they do. This paints things in a rather grey tone at times. With other characters commenting on things. This gives Tales of Arise a more grounded feeling story compared to past games. It feels more mature and willing to make a statement. Whilst saying that the game still delves into some silliness the series is known for. There is a quest to find owls that are scattered around the world. By doing so it unlocks an item of clothing such as hats, glasses and various other trinkets. These can be equipped to any of the characters at any time making some cut scenes a bit funny with how ridiculous the characters look.

Also returning to the series are titles. By completing certain objectives such as crafting certain items, cooking certain meals or just by continuing the story a title is unlocked. Unlike previous games these are not equipped to characters to change their stats. Instead they open up a small set of 5 nodes on a board filled with the other titles. These can be learned using skill points which are earned from battles and completing side quests. These skills range from new attacks, to more damage from certain moves and faster casting times. The main way to get stronger in the game is by unlocking titles and learning as many skills as you can. Along with this new attacks are learned via proficiency. Each character has three types of battle proficiency. Alphen has ground sword attacks, aerial sword attacks and blazing sword attacks. By using artes and attacks that are part of each proficiency a new attack can be unlocked. This encourages the player to make full use of each characters skill set in order to unlock the attacks. 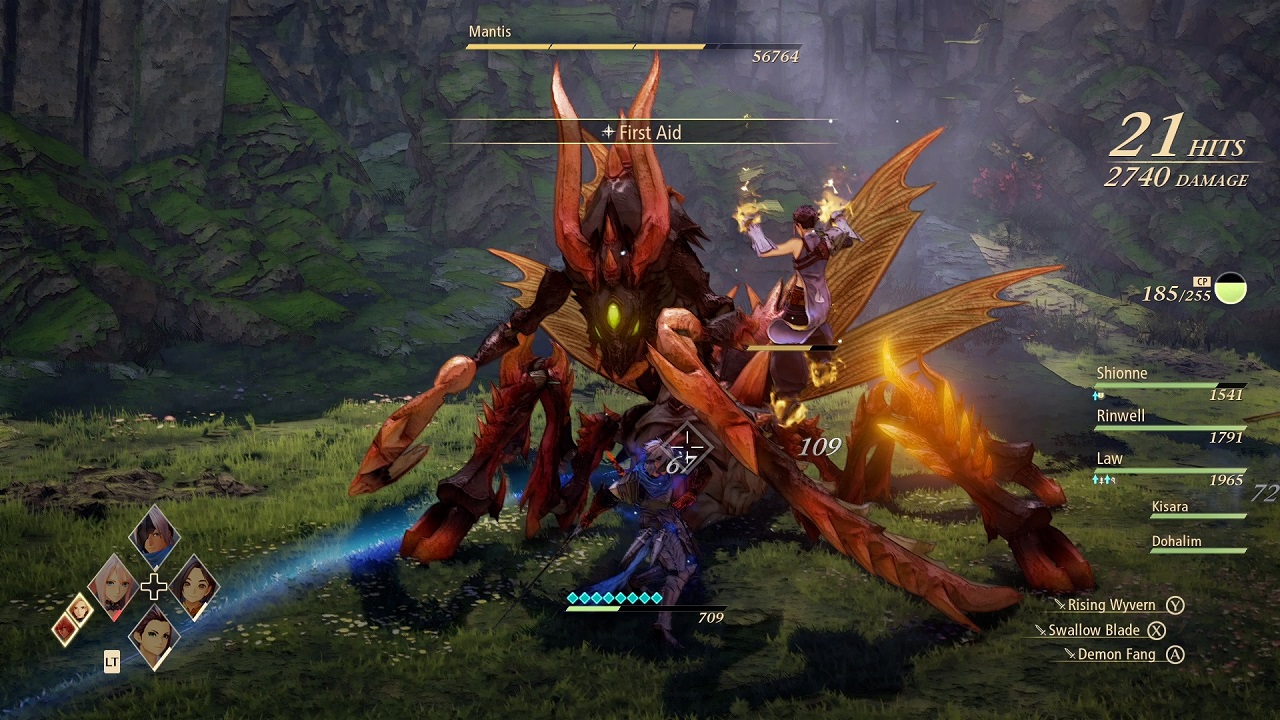 Speaking of battles; the game is an action RPG that has the player make use of standard attacks via the R1 button, a Dodge/Guard using R2 and Artes using the face buttons. By attacking enemies the player will put them into a break state making it easier to chain artes together. Also each character has a boost strike that can be used with the directional buttons when the gauge fills. Each character has a distinct move. Shionne's strike is effective against flying enemies, Law can break the guards of armoured enemies and Kisara stops the charges of enemies with her guard. Also tied into battle are series stables such as over limit, a state characters enter that allow them to use as many artes as they can in a certain time limit and allows the player to perform a mystic arte which is the characters ultimate move. The player can also make use of combined boost attacks that happen when a certain amount of damage is done to an enemy to fill their individual gauge. These moves are mostly used as a flashy finish to the enemy. All these systems in place make the battles fun and dynamic, with a bit of strategy involved. Each party member has their own role to play. Luckily the game lets players swap on the fly between each character on the field letting players experiment and have fun as they see fit. While playing through the game I had the apprehension that I would get tired of the battles due to how involved they were but surprisingly I didn't I found every battle fun and really enjoyed each one.

With regards to presentation the game boasts a visually stunning aesthetic. The landscapes are sprawling, diverse enough and colourful. Each being distinct and fun. The character designs are distinct and not too exaggerated striking the nice balance between the anime style the series is known for and being a bit more reigned in. The music is incredible giving a lot of character to each region, dynamic energy to the battles and emotion to the more dramatic moments of the game. I played the game with the English voice cast and think they did a superb job in portraying characters emotions during said scenes and being playful enough in the joke segments. The game was played on a PS5 on performance mode and it ran very smoothly. Even with a lot of enemies on screen I didn't see any noticeable slowdown or frame rate issues at all. The game ran very well and kept pace with my constant button pressing.

As the first new Tales game on PS5 it does a superb job of being the brands ambassador. A magnificent RPG filled with a cast of endearing characters with a fun dynamic action RPG battle systems all in place to tell a dramatic story about slavery, oppression, hope and freedom.