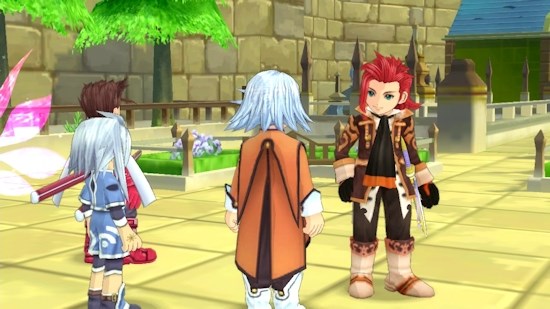 Released back in 2004, Tales of Symphonia gained notoriety over here for being one of the few full-on JRPG’s on the Gamecube at the time. It is also by far the best on the console and one of the best in the Tales franchise.

Following the story of Lloyd Irving as he accompanies childhood friend Collette in her journey to be blessed by the elemental spirits in order to become the Chosen who will save the world, the premise is pretty basic. However, as you progress through the story it twists and turns as angels attack, inter-dimensional attackers appear and a whole host of betrayals, sacrifices and noble gestures take place. Its fun, fast paced and manages to juggles several intertwined storylines throughout the narrative without becoming bogged down or taking the Final Fantasy route of stopping the main story to do side quests for no real reason.

The roster of characters for the game is also one of the best and most varied you’ll see in many games. From Sheena the summoner who fights with what look like Buddhist charms to the excessively clumsy Collette through to Presea the taciturn girl with an axe bigger than she is, they’re all great fun to get to know – the only disappointments are Lloyd (who suffers from typical JRPG hero syndrome) and Genis, who would be likeable if his English voice actor didn’t make him sound like someone stepping on a cat - there's no Japanese language track available here I’m afraid.

The battle system uses the standard Linear Motion Battle System that’s common to Tales and it works just as well here as it does in every other Tales game, with characters roaming around between planes on what’s essentially a 2.5D plane. In Symphonia it’s supported by a great system where characters can gain special attacks either through fighting in certain combinations, equipping certain items or by filling up the unison bar.

It works perfectly, and the only real flaw is that as the game pre-dates online play the multi-player (yes you read that right, you can play the single player campaign but have all 4 characters in the battle system be player controlled!) doesn’t really work too well as the camera locks onto player one, meaning that other players can easily end up fighting off-screen leading to easy deaths.

The game looked fantastic on launch and was easily one of the best looking games on the Gamecube. Whilst it has aged a bit its still perfectly servicable and who knows, perhaps Namco might consider an HD re-release as is the vogue these days – a simple upscale would have the cel-shaded graphics looking incredible.

All-in-all Symphonia has everything you would want from a Tales game and remains an incredible JRPG which has stood the test of time much better than the majority of its competitors.  Whilst getting hold of a copy now can be an expensive proposition its worth the effort, especially considering that the game is still fully playable on the Wii.

9
One of the best JRPG’s you probably never played.