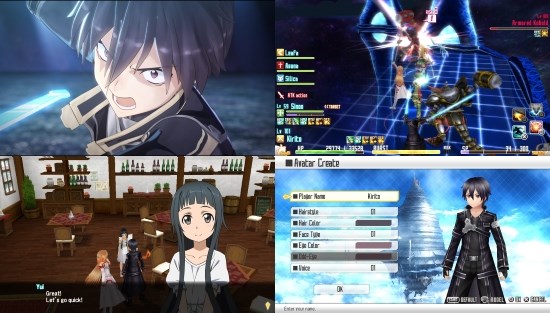 It might not have been the first series to blur the lines between a virtual world and reality in some dramatic ways, but Sword Art Online has managed to capture the imagination of any thanks to its impeccable sense of world-building and the care and attention lavished upon its imagined titular video game to ensure that it's a believable part of the show's narrative. Perhaps the ultimate test of that attention to detail is whether Sword Art Online could legitimately make the leap into serving as a video game in its own right, and it's a test that we can now apply to the franchise as Sword Art Online: Hollow Fragment comes to the PlayStation Vita in digital form to Europe.

In terms of its story, Hollow Fragment finds itself in an interesting position - rather than simply retelling the story portrayed in the original light novels or anime adaptation, it instead takes a decidedly different tact; one that boasts some clear spoilers for anyone who hasn't indulged in that source material, so beware as mild spoilers lay ahead in this review.

We actually start with our protagonist Kirito (or whoever you decide to name and design your lead character as - I was lazy and stuck with the defaults) happening upon a strange new area within Sword Art Online's world, filled with unexpected dangers and seemingly without any means to teleport out of it. Also trapped within this area is a new (and initially somewhat suspicious) character named Filia, but with no other option than to work together to defeat the threat at hand the two ultimately form a truce with an agreement to explore and solve the mystery of this new area of the world from which there seems to be no means of entry or escape for anybody aside from Kirito himself.

This leads us to learn about why Kirito is still in Sword Art Online at all, as it seems that some kind of unusual occurrence means that despite defeating the game's mastermind on its 75th floor, its players remain trapped rather than freed from their virtual incarceration. Thus, the only option left to SAO's survivors is to continue their conquest of the game all the way up to the hundredth level, and with the same glitch that has left them trapped also stopping them from travelling back down beneath the 76th floor all and sundry on the front lines have to decamp to a new home. Oh, and as well as another original chaarcter Leafa and Sinon (from the currently airing Sword Art Online II) have also turned up for some reason than even Hollow Fragment's narrative can't be bothered to explain. This leaves Hollow Fragment's in-game content split into two sections - one of which sees you investigating this strange new area of Sword Art Online, and the other which puts you on the front line of defeating the remainder of the game so that you and your comrades might escape and return to reality.

The first thing that strikes you about Sword Art Online: Hollow Fragment is the sheer scope and ambition of the game - sure, it's no Skyrim, but for a handheld title it feels vast in terms of the amount of content on offer and the considerations required while playing it. Simply in the game's true starting point of the main town on the 76th floor you can wander around, chat to numerous locals, buy food, buy and sell items, weapons and armour, craft and upgrade your equipment and chat up the bevvy of girls that hang on Kirito's every action - in other words, everything you'd expect from a major RPG.

Once you've had your fill of taking in the sights and preparing yourself, it's time to enter the fray and party up with one of those aforementioned girls, all of which have their own strengths, weaknesses and levels from Asuna (by far the strongest partner for Kirito) through to the relatively inexperienced Sinon. With that done, you can either head off into the strange "Hollow Area" to solve its mysteries, or venture into Sword Art Online itself to work towards clearing the game (which is effectively a game in itself lifted from a previous title, Sword Art Online: Infinity Moment). Both of these game modes offer what you might expect of an RPG, with quests to complete, bosses to defeat and an unfolding storyline which ensconces your efforts and progress.

Graphically the game looks good, with a wide variety of monsters to pit yourself against and some expansive landscapes and areas to explore which are suitably impressive for a handheld console. Although the draw distance for these areas is excellent, the same can't be said for monsters and other individuals roaming within them, as they have a nasty habit of "popping" into the scene out of nowhere in a discombobulating fashion - a clear trade-off against the sheer number of on-screen elements at any given time, but one that can easily break your immersion in the game on a regular basis. The game's occasional cut scenes are superb throughout, matching the look of the anime series but tweaking it well to fit the game's aesthetic and character designs in a pleasing manner.

Some visual novel-style vignettes and associated dating sim elements aside, the entire game takes place in third-person perspective as you (and your chosen partner - a multiplayer game mode is available, but only for local co-operative connections between consoles) explore the world, all areas of which are impressively busy and frequently packed with other players, NPCs or enemies. Get too close to those enemies and they'll attack, although given the sheer number of them you'll have to pick and choose your battles - once engaged in combat however, you have options to attack, dodge and use a variety of special abilities, whilst you can also give basic instructions to your partner to assist you and even switch between the two characters so that one can take up the primary role in the fight while the other recovers their health, SP or "burst" so that they might regain their efficacy. All of this brings about a decent blend of strategy set against bouts of hacking and slashing - at times the sheer number of enemies, their random spawning and cramped locations can make planning out a battle difficult or simply a case of pot luck, but when things work out there's a definite feeling of satisfaction to be had from whaling on enemies and dodging their attacks. Thankfully, even when you die in the game you don't die in real life - a good job as using healing potions is nigh-on impossible in the heat of battle, so death comes frequently - but rather respawn at the start of the area of the map you lost your life in.

As well as the more typical random encounters, you'll often find yourself presented with more specific tasks to involve yourself in - in the Hollow Area you'll find Hollow Missions which involve killing a certain number of a particular type of enemy within a specified time limit, and Sword Art Online itself presents gated areas that can only be unlocked by killing specific enemies, mid-bosses and end of dungeon level bosses, and other enemies that need to be killed on a floor within a time limit. Hollow Fragment also follows actual series lore when it comes to progressing in Sword Art Online - when you reach a boss room, rather than dive straight in you'll be forced to regroup back in town, ensure that all of the pre-requisites to take on the boss are cleared, and then join a larger party to take it on.

The biggest issue that arises from all of this is the variety - or lack thereof - in the quests and missions you're presented with. Almost everything involves either killing a particular number of enemies or collecting a certain number of items, which certainly encourages exploration (and there's plenty of treasure to be found in most areas) but can feel repetitive without anything else to break up those constant fetch or seek and destroy quests. This is only partly mitigated by the fact that the game does a great job of making Sword Art Online feel "alive" - you'll constantly run into other groups of players, allowing you to step in and help them out of a sticky situation, and both these levels and the main towns feel busy and bustling while only occasionally trying a little too hard and sending the game's frame rate plummeting.

While we're at it, let's discuss the other major negative point with this game - its English translation is poor, occasionally unacceptably so. While the main story and dialogue is mostly translated well (albeit with no shortage of grammatical errors), some of the additional dialogue and text is horribly mangled, leaving characters spouting nonsensical phrases or constructing sentences as you might expect a three year-old to. Thankfully this incidental text isn't all that important in the grand scheme of things, even if it does prove frustrating when your partner in dungeon-crawling is popping up text bubbles of garbage from time to time, and potentially even gets in the way of your conversations with other characters as you try to progress your relationship with them to that all-important hand-holding phase.

These gripes aside, Hollow Fragment is - short of a full Oculus Rift MMORPG - what any Sword Art Online fan could have wished for. The game has a staggering amount of content to offer, particularly for a handheld console title, and perhaps more importantly it does a superb job of building most of the major mechanics exhibited in the original story into its game in a way which not only works but actually makes for some satisfying gameplay. A better translation and some more variety in its quests would have ensured that Hollow Fragment is a must-buy, but even with these issues duly noted this is still a game that could keep you playing for a long, long time, and having a good time while you do so.

7
Some of its gameplay is repetitive and its English translation disappoints, but the sheer amount of content and well-realised structure of Hollow Fragment will impress Sword Art Online fans immensely.
LATEST REVIEWS
13 Sentinels: Aegis Rim (Switch)