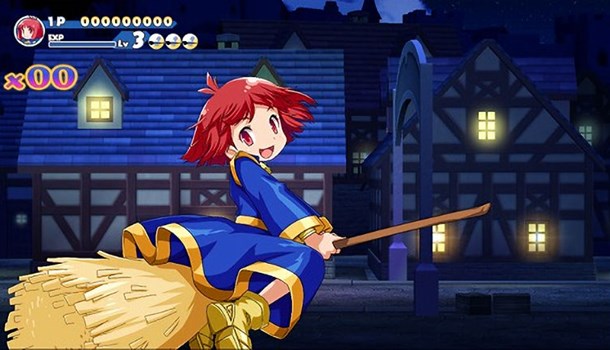 Something wicked this way comes, while Cotton's beloved sweets, the WIllows, are vanishing. Lured into service by the Fairy Queen who offers our plucky redhead a lifetime supply of the treats in return for her help, it's time to mount the broom and prepare for another round of beautiful bullet-hell.

As a huge fan of the Cotton series, I was really looking forward to this latest, brand new iteration from ININ. With previous releases rehashing older entries from teh Cotton catalogue, it was about time we got a new iteration, and boy does this deliver. With bells on.

Developed by Studio Saizensen, best known for their Umihara Kawase series of games, Superlative Night Dreams takes us on a familiar side-scrolling shooting journey with a number of new twists, modern gameplay additions and a roster of characters to choose from.

That's right, Cotton's not alone this time, a bevvy of characters awaits you at the starting screen, all of which have their own very unique traits, all while using a 3 button mix that is (generally) quick shot, charged shot and bombs. Some characters do have variations, but for the most part those buttons will do the same thing in different ways.

Starting the game, I was immediately taken with how fast the bullet hell begins. You have a life bar, so one hit won't necessarily kill you, but even on the first level enemies come at you thick, fast and spraying candy-coloured death. It is glorious! 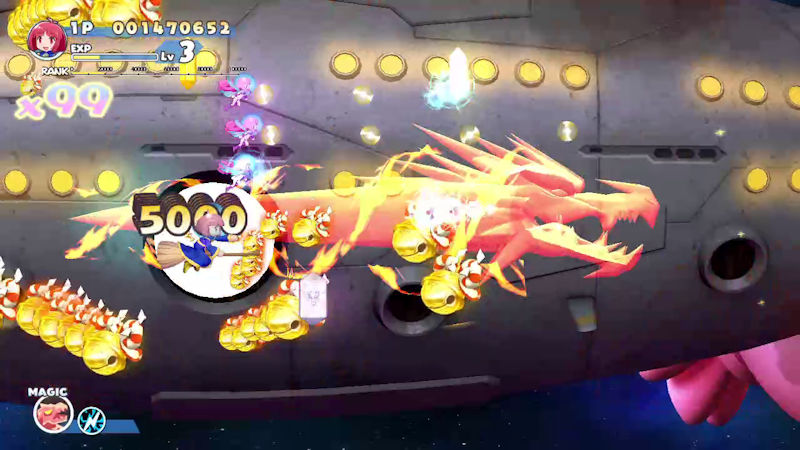 Presentation is colourful and fun

You'll need to watch for whiplash too, because this is one game that really throws you around - presentation has really been given a lot of love here, as your character will do a flyby of the screen before settling into place, and the game will zip you around corners, up hills and into steep dives, the acceleration changing in each case, it's quite the rollercoaster and all the better for it. There's a very modern arcade feel to the game, which is quite remarkable when you remember that Studio Saizensen doesn't really make shooters.

As you kill enemies you'll be presented with crystals - these can be shot to change colour just like the bells in Twinbee, each one upgrading your current weapon or changing you to a different one. You'll need to strategically select what you need and take as much care cultivating crystal upgrades as taking down enemies. It's a real juggling act, but tremendously gratifying when you get it right.

Levels can be tackled in pretty much any order you like, and there's 8 to conquer (though there's another 6 hidden ones if you can play like a boss).

Adding to the variety are seven playable characters, including heroines from other Saizensen games. Each of these handle very differently and come with their own signature weapons. While Cotton casts magic that's switched up by gems, red witch Appli can catch and throw her enemies, Ria powers up by deftly scraping past bad guys, Luffee has a charging laser, Kawase fishes for enemies and then uses them as ammunition for her bazooka and Tacoot has a drone. My favourite of the ladies was Fine, who works on a timing mechanism that's recharged by collecting crystals - she's enormous fun to play. 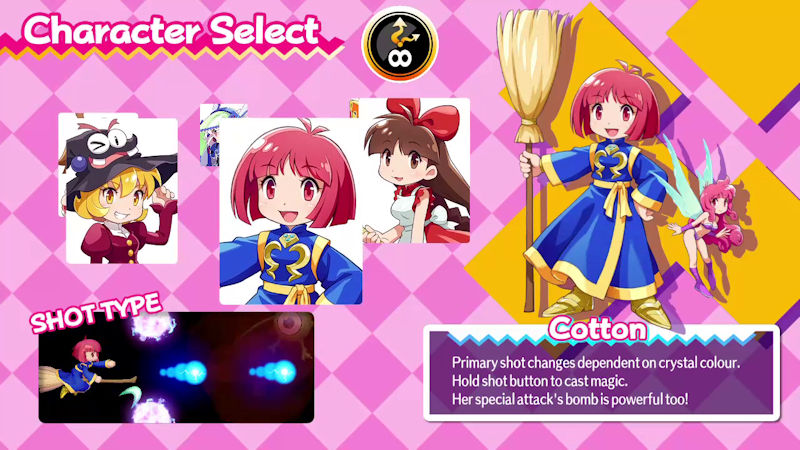 No matter who you pick, the pastel coloured graphics are gorgeous, especially on an OLED Switch screen. Bosses are absolutely huge with fun and varied attack patterns, and no matter how I died, I never felt frustrated, which is a huge bonus for a game that trades on replay value. Explosions are nice and crunchy, and the soundtrack is an exhilarating mix of playful pop tunes.

Shmup enthusiasts should certainly invest in this game, and even those who aren't traditionally fans of the genre will find a lot to like here, from the friendly, funny presentation to the whiplash gameplay and variety on offer, I had an absolute blast with Cotton.

9
Superlative isn't a shallow boast, this is top-tier shmup-ing!