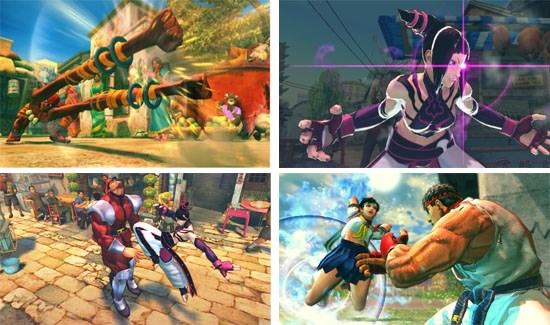 It’s only been a year since Capcom single-handedly brought about the resurrection of the fighting game. With the death of the arcade and the move to online play, the fighter just seemed to be falling to the side of the road, forever to be forgotten. Street Fighter IV brought it all back to the foreground and introduced a new generation to the series. But after such a short time, should we be buying another version?

So what has changed in the intervening year? Well, we get 10 brand new characters from the original SFIV, eight of which come from Street Fighters of old along with two brand new characters; Juri and Hakan. Juri is a South Korean Taekwondo fighter who is a quick, fast striking character with an Ultra that activates the Feng-Shui Engine in her left eye, increasing her attack power.  In contrast to the serious nature of her character, Hakan is very much more comical. The character is a Turkish oil wrestler who oils himself up before a fight and can even increase his attacks by covering himself in more oil. It’s all about the slip and slide with this character.

Other new additions see every character in the game getting another Ultra Combo, which must be selected at the character select screen. Online has been given some serious time as well, with the addition of Team Battle mode for up to 8 players, a Replay Channel to view and save replays from online matches around the world and Endless Battle where a winner plays against a rotating group of up to 8 players.

Also included is the return of the car and barrel bonus stages from Street Fighter II. These stages, while an interesting division for the first couple of play throughs, become somewhat tiresome after their novelty wears off. Thankfully after completing the Arcade mode for the first time the option to switch them off becomes available. We promise that you will be reaching for that option very quickly.

But what about those that brought the original SFIV? Not to worry, any DLC you bought such as costume packs will work in this super edition and get automatically added to the game. Also, if the game detects a SFIV save file, it will instantly unlock two additional character colours for everyone, giving a cell-shaded and sketch book look to everyone.

As for the basic gameplay itself, very little has noticeably changed on the surface. The game is still as easy as ever for newcomers to pick up, while veterans can still combo like there is no tomorrow. With the addition of new characters, this has still not been comprised - SSFIV remains one of the best examples of accessible gameplay, making it easy to play and hard to master.
There are changes below the surface which become noticeable over time, such as the reduction in power of Ultras, Sagat’s slight depowering and a list of minor changes that would no doubt be as long as five arms, a couple of legs and maybe a torso. Though nothing feels broken and the improvements do just that; improve. They encourage players to explore and try new things and constantly keep players guessing with each other.

Graphically the game here has not changed much at all. The new characters look fantastic in 3D, especially Dudley who just has a warm, special place in our hearts. He reminds us of Louis Armstrong from Fullmetal Alchemist, so it's no wonder we like him so much. The new Ultras are as crazy as ever and some new stages have been added, with our new favourite being the under construction skyscraper. Ryu’s new Ultra seems incredibly brutal with the crunching of bone as he lands his fist on the jaw of his opponent before sending them flying into the sky. It’s beautiful in a violent sort of way.

The anime cut-scenes from the original game come back as well, though characters from the previous game only seem to get voiceovers and some static artwork for their intros, leaving only the new characters with new scenes. To be honest these are once again largely forgettable and if you want to know the story of Street Fighter, we recommend the Udon comic collections as they have some much better artwork and explain the stories much more impressively than the game does.

For those that really get into their Street Fighter, they will more than likely spend most of their time in the online portion of the game. Now be warned, online matches are not for the faint of heart. True, playing with friends will keep the games even, but take on random opponents in the online world and prepared to have your arse handed to you on a silver platter with some garnish and a large restaurant bill. Online is merciless and unless you have a good understanding of the moves, combos and hold your own on the harder settings of Arcade, you really don’t stand a chance. There are good players and then there are those that seem to just flinch and you’re dead on the floor; it happens that quickly.

While playing on the standard Xbox or PS3 controllers are fine, we do recommend either picking up a good arcade stick for either system or the fight pads. The improved D-pads do wonders for moves and while the PS3 controller is easier to deal with many will no doubt go onto the 360 for their friends lists. The Xbox 360 D-pad is not up to the abuse it’ll have with SFIV and your thumbs will hate you for using the standard controller. A lot of places are doing the pads cheap now, so it’s well worth the investment.

It seems impossible, but Capcom has actually managed to improve what was already a fantastic game. Yes, the argument for why this was a disc release and not downloadable content will rage on forever, but considering the huge amount of new content and the low price of the disc which includes everything SFIV had while working with SFIV DLC, it is really hard to have a justifiable grumble at Super Street Fighter IV. It is true that some fans will get much more out of the game than the more passive and casual fans of the series, but considering what is on offer and how much fun it is to play with friends both on and offline, we dare you to say you don’t fight the urge to scream “Hadukon” when that last punch hits.

9
A fantastic update for a low price, but only constant Street Fighters will see all the content this has to offer.
LATEST REVIEWS