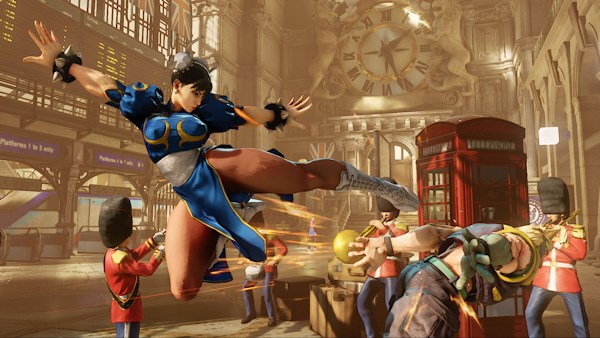 At last, Capcom gives us the game they should have launched with, complete with a proper arcade mode and some fun extras thrown into the mix.

For those not yet acquainted with the controversial release, Street Fighter V arrived on the scene 2 years ago as Capcom's answer to Windows 10 - which is to say no further versions should ever be needed and with all new iterations simply an enhancement to the core title. However the barebones nature of the original release left many, myself included, cold.

The game arrived with online play being the central feature and it featured a meagre roster of characters and no arcade mode. This was about as little as Capcom could possibly get away with and while the core engine itself was fine (though aesthetically not to everyone's tastes) you were required to have a PlayStation Plus account to even access a decent fight due to its multiplayer only modes.

With 16 characters (4 of which were new and locked behind a micro-purchase gateway, or until you earned enough in-game currency to free them) this was a slimmer roster than expected considering how many iconic figures the series has produced over 30 years, and it was clearly intended to be bolstered with DLC purchases down the road. The lack of stages was another issue and beyond that the initial release didn't even contain a VS CPU mode - you trained, bought a PS Plus account, and then played online. It was about as exclusive and uninviting a package as any games company, outside of EA, had ever produced.

All that said, many of the issues have been resolved via free updates over the last year or so. Story Modes have been added (though a bit paltry at 3 fights a piece), CPU VS arrived and whether you thought the game was bare-bones or not, the actual fighting engine and player balance was actually pretty stellar.

And with that we arrive in 2018 with Arcade Edition. And finally we have the game that SF V always should have been from the start. The Arcade mode offers paths from the 5 main Street Fighter games, with the character selection limited to (roughly) those that were available to each iteration at the time. Completion with each character offers artwork for you to collect and a meaty challenge that goes beyond the trifling story mode, which to be honest was really only good for racking up in-game currency.

For those that have the original release (and it may be a bit dusty, like mine) Arcade Edition is a free upgrade. For a limited time Sakura is added free of charge with 3 outfits and Season Passes 1 & 2, which greatly expand the roster, are selling for a reduced price. This is to some degree, a bit of a concession on Capcom's part, as they have taken no end of flak for the piecemeal DLC cash-grab reputation that this game is tarnished with. £3.69 for a "nostalgia" costume to replace some of the dog-ugly versions this game ships as standard is almost criminal after all (I admit to buying a couple of outfits, Juri's especially as she looks like a crap dominatrix by default).

Extra Battle is a new, rock-hard experts-only mode for hard-core players that earns you in-game currency just for playing. It's hard as nails and I'd recommend some training before diving in here. Victory results in some cool new costumes too, so it's worth popping back each week to see what the latest challenge and rewards are.

The Arcade update also does a little fine-tuning. The V-Triggers, SF V's signature mechanic, have all been adjusted to provide better handling (though there are reports that Chun Li has actually suffered in this regard while characters like Ryu are much more deadly) and online matchmaking is faster and more accurate, finding players of similar skill for you to fight against.

For my part, I don't play online much. When I do, I have a lovely Mac Pro sat upstairs that I can use for free. Paying for a PS Plus account irks me and as such the online features of Street Fighter V are much neglected. For this reason alone, Arcade Edition makes me very happy. I can play my friends at home and practice on meaty new modes the way I always did with Street Fighter IV. While the new game still seems like a cynical cash grab to me, Capcom have done a great deal to improve my view of them with this free upgrade and discounted season passes. Yes, they now have some more of my money thanks to my purchasing Season Pass 2 and some new costumes, but that's a reciprocal gesture on my part to show that such moves on the part of the gaming giant are genuinely appreciated.

Capcom have given Street Fighter V the update it sorely needed and with this we usher in 2018 with the companies signature brawler is fighting-fit shape. About Hado-Ken-ing time!

9
Street Fighter V's flawless mechanics and excellent presentation finally gets some meat on the bones.