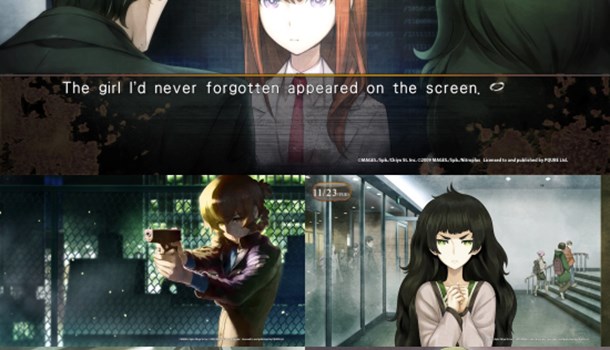 While recent years have seen a huge growth in the number of visual novels translated and released officially in the west, it's hard to think of any bigger hits to make an English language transition than Steins;Gate - off the back of a successful anime adaptation, interest in this blend of time travel, conspiracy theories and human drama skyrocketed, and ultimately led to both PC and PlayStation console owners getting to enjoy the source material for themselves. Now, we have an opportunity to return to the world of Rintarou Okabe in the form of Steins;Gate 0, and it's everything you might have hoped for from such an opportunity.

Rather than serving as a full-blown sequel, Steins;Gate 0 instead predicates itself on one of the game's "bad endings" - yes, you're saved Mayuri from her seemingly intractable demise and moved to a timeline in which her life is secure, but in the process the tendrils of fate have now ensnared Makise Kurisu. Having seen and felt her die at his own hands, Okabe is inconsolable and unwilling to continue the fight, and it seems that no amount of persuasion will convince him to renew his hunt for the perfect timeline, or "Steins Gate" as it has become known.

Thus, we're left in a world where Mayuri is safe from harm but Kurisu is no more, and even as we fast-forward to six months after these events the mental scars that pepper Okabe's psyche are still raw and real - Hououin Kyouma and the Future Gadget Lab are nothing but childish memories Okabe would rather forget, while any number of triggers that bring forth memories of Kurisu are enough to send him reeling into emotional turmoil. Somehow, in spite of all of this our protagonist has managed to start rebuilding his life - the former self-proclaimed mad scientist is now a diligent and ambitious university student who sees his own opportunity to progress Kurisu's sterling work as the only way to honour her memory.

It's this studious diligence that brings Okabe into contact with Maho Hiyajo, an assistant at the very same Brain Science Institute which Kurisu also worked at - indeed, the two were firm friends before the latter's untimely demise. Maho is in Japan to aid renowned Professor Leskinen on a tour which sees him unveil a remarkable system - Amadeus, an AI born by transferring the memories of a living human being into a computer system and then letting it think, learn and develop for itself. While Maho is one of two test subjects for the Amadeus system, the other subjects shocks Okabe to his core, for its none other than Makise Kurisu herself. However, this AI version of Kurisu was developed from memories captured eight months prior to her death, so although this young scientific genius is very recognisable to Okabe, she has no recollections of our protagonist himself.

While Okabe wrestles with his own complicated feelings around this decidedly unusual "return" of the girl he loved, such concerns may need to be set aside as once again actors from around the globe move to gain access to time travel technology, of which Amadeus and the systems around it become a pivotal part. Does Okabe have the mental fortitude to return to the search for Steins Gate, or is the world doomed to repeat the events foretold by Amane Suzuha that lead to chaos and another world war?

Returning so directly to a hugely successful story to inject new elements into it is a risky gamble for Steins;Gate 0, albeit one made easier by its imagined world of multiple timelines and infinite possibilities - it's a relief therefore to say that this visual novel is a stunning success that arguably even surpasses the original. For starters, all of the core elements that made Steins;Gate so beloved are here - you get to spend some decent spells of time with each character while newcomers to the cast are dropped in and fleshed out in a decidedly satisfying way, the story knows when to lighten the mood by injecting comedy into proceedings without damaging its ability to delve into the pits of emotional despair, and the blend of real-world science with ludicrous fiction and conspiracy theories is unrivalled.

All of this is complemented and enhanced notably by Steins;Gate 0's increased sense of scope and scale. Its story no longer simply jumps between world lines over a short period of time but flings us far into the future to glimpse the horrors to come from Okabe's inaction, and perhaps even more notably no longer tells the entire story purely through Okabe's eyes - we frequently switch to view events from the point of view of Maho, Suzuha or other members of the cast to give a more rounded view of what is transpiring and the characters swept up in this maelstrom.

This increased scope is also relevant in terms of the devices the story has at its disposal - its pondering of AI and memories is a natural fit in extending the Steins;Gate universe in new directions, while also giving Okabe (and thus the player) a fascinating new relationship with Kurisu's Amadeus AI which plays heavily into both the story and mechanics. Even if Kurisu's presence is diminished as a result, her physical absence is more than made up for by Maho Hiyajo, who proves to be a wonderful addition to the cast to stake a claim as a great character in her own right.

Even compared to some of the original game's most grim moments, there's an even darker tinge to the story here, bringing all sorts of abject horrors to the table which it relates to the viewer in visceral form through writing, voice performances and imagery. This makes some moments in the story genuinely tough to sit through, but with enough edge of the seat tension to keep you buttoning through even when parts of your brain are pleading for you to stop. Even considering the demands of needing to finish all of the story arcs for this review, I still ended up clocking up several late nights simply because I had to see what came next at all costs, such is the compelling nature of the game.

Another improvement over Steins;Gate relates to the actual gameplay itself - while the original game required an almost ridiculous amount of luck, diligence or reliance on a walkthrough guide to unlock all of its endings, Steins;Gate 0 is far more relaxed in terms of giving you something of an interactive experience without making traversing every path a nightmare. Key prompts which act as "flags" in the game are all based around interactions with Amadeus (via mobile phone mechanics similar the first game, albeit with SMS messages now replaced with an off-brand version of LINE), giving a clear focus that makes it easy to find branching points and explore every element of the story. For my personal play through without any outside assistance the order in which story arcs revealed themselves to me was also hugely satisfying, with each arc heading in its own direction while also building upon information that was previously revealed to the player to provide an overall experience that was immensely enjoyable.

From a narrative point of view, the only real disappointment is what is being referred to as the game's "true route", which feels like little more than an aside that ends abruptly without really closing the loop of its story in the way you might hope for. Still, coming after so many other strong narrative arcs this doesn't feel as cataclysmic as it might otherwise have been, so taken as part of a complete experience it becomes more of a nit-pick than a show-stopper.

Speaking of nit-picks, Steins;Gate 0's English localisation is largely terrific with a few exceptions - one video that plays at the end of the "true route" is frustratingly left untranslated, while there are a smattering of typos and text errors (notably the game flubbing attempts to display umlauts) that crop up here and there but don't really spoilt the experience. The game's menus, tips system and other sundry functionality items all feel slicker and faster than the original game to make playing the game a smooth experience, while the artwork on show throughout is a little bit of a mixed bag but is more often than not strong and capable of depicting everything required of it with gusto.

Having come into this game with a little reticence - how do you improve upon a visual novel as good as the original? - I'm genuinely beyond impressed with Steins;Gate 0. Its increased scope and confidence in its story-telling shines through to create a hugely compelling story, filled with laughter, tears and gut punches that often had me shouting at my TV in exclamation as events unfolded on-screen, weaving musings on AI and the nature of memory into its ever-shifting time travel narrative. As well as offering a welcome return to the original game's cast, this follow-up also introduces some wonderful newcomers to the mix who will quickly cement themselves as fan favourites in their own right - itself an impressive feat given how beloved that original cast has proven to be.

If you're a Steins;Gate fan, then you absolutely must play Steins;Gate 0, of that there is no doubt, even if you need to leap through numerous world lines to find the one where you can pick up a copy. If you're a newcomer to the visual novel's world, then this isn't a jumping on point I'd recommend however - go back and play the original game (or watch the terrific anime - there's even a recent OVA floating around that will lead you right into the start of this game) before embarking upon this one. Trust me, it'll be worth it.

9
A darker, stronger and even more compelling follow-up to the original visual novel that expands its scope and cast while excelling in its execution. An absolute must-play for fans of the franchise.
LATEST REVIEWS
13 Sentinels: Aegis Rim (Switch)