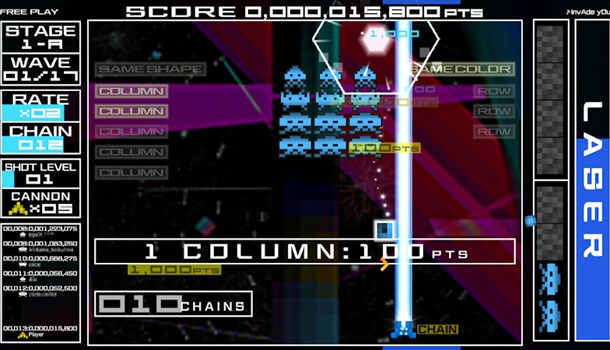 Most gamers know that Space Invaders largely launched the video game industry, Tomohiro Nishikado's seminal alien-busting pixel shooter supplying that heady mix of excitement and hi-score chasing that proved more addictive than caffeine. I was born in 1978, so literally can't imagine the world without it.

Even so, the idea that the game would still be seeing a release, albeit in an updated form, over 40 years later is quite a feat. Space Invaders Forever is a compilation of recently remixed games that take the classic formula, add a splash of graphical paint and cranked-up the audio.

What's worth noting is that the game is not new, rather a collection of three titles that have been released on other platforms. The one I'm familiar with is Space Invaders Extreme, which I enjoyed tremendously on Nintendo DS, especially as it was rumble compatible, making it feel alive in your hands. No such feature here, but you are left with the enhanced, blazing graphical update that flashes and bangs like it's trying to force you into a seizure. This is Space Invaders at a 90's rave, and easily my favourite of the trio. Enemies can fire back, deflect shots and vary in style and attack patterns, keeping you on your toes as you fight off the (space) invading hordes. Once you defeat a certain number of these evil gits, you'll be met with a bonus round, featuring freewheeling enemies that need to be killed off within a time limit - success here bleeds into the next stages, making things even more frenetic and colourful. It's addictive stuff.

The game sensibly offers you the option of replaying any stage you've beaten for premium hi-score chasing, while it offers an easy point of entry it will get insanely difficult, just as old-skool games should be. The ability to skip the easy stuff is a thoughtful addition by team Taito.

Sadly, the sequel, is not included in this collection, and that seems an odd oversight.

Game two is Space Invaders Gigamax 4 (which sounds like a Red Dwarf title) which is oriented around multiplayer. Presentation isn't as flashy as it's Extreme relation, but it it's really meant for friends, where you'll team up to take down waves of enemies. Sadly I didn't have the chance to play against anyone, but I imagine it's a good blast with some mates and a plentiful supply of booze.

Space Invaders Vs Arkanoid is, as the name suggests, a crossover of Arkanoid with the Space Invader formula. This is a little odd as it really requires a touch interface, which is no surprise when you realise this is a mobile game adapted for Switch. In this version of the game you'll be bouncing back enemy fire in Arkanoid style - I can't say the touchscreen setup did much for me, but I did enjoy the game, which is curiously addictive.

for the price it's a fairly thin collection - there are meatier and more fulsome collections out there on other formats, but for now this remains the best option for fans of the classic game with a few twists. Extreme is my pick of the bunch, and if you enjoy chasing hi-scores you'll get a lot out of it - gamers looking for more modern thrills may not find the price of entry palatable.

7
Three solid games with one standing out (Extreme) this is one for hardcore Invader fans who want to go retro on the go at any cost.