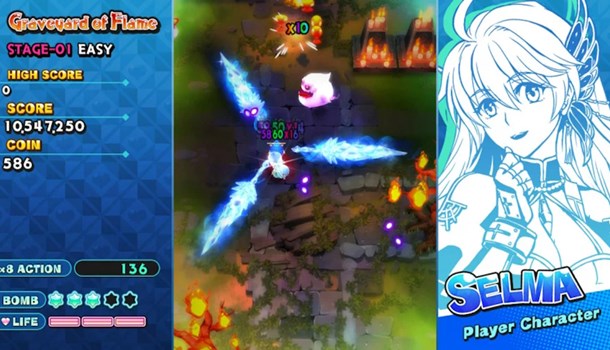 Combining two of my great loves, top-down shooters and cute Japanese characters, Sister's Royale: Five Sisters Under Fire (a pretty descriptive name) is a bullet-hell shooter that has the neat format of the girls running rather than flying through several stages of increasingly intense sibling rivalry.

A prophecy foretold the birth of the five sisters, who were to combine their powers to defeat the villainous Seytan, but quickly fell out with each other and scattered to the four winds. Now Sonay, Selma, Ece, Nur and Lale are all wooing the same man somehow, and are fighting over him. Women eh? *Ducks*

The old-school scrolling text intro was a surprise, being far more retro than I expected, but far from a pixel-based affair, everything in the game is fully rendered and has a nice feeling of weight to it. The stages are colourful and varied, with some cute minions needing a good shooting, until we meet one of your 4 siblings who will taunt you before you attempt to shoot them into submission and get a sisterly show of grudging affection. It's all rather fun considering the amount of ammo they're throwing at each other, and I rather liked the fact that this isn't just a game of extreme fratricide.

As you might expect, each sister on offer to the player has a different attack pattern, from wide ranging shots to concentrated firepower. The characters designs are beautiful and appear throughout the game in cut scenes. These can be overly verbose, and I found myself skipping through them after a while, but it's certainly a lovely looking game.

The practicalities of this sort of game are an issue on the portable screen, though these technical limitations can be overcome. If you play in standard screen mode, you use the centre third of the screen for the action, while the surrounding two thirds feature pictures of the sisters and your score. This is a bit fiddly to play when there's so much going on, so you have the option of rotating the screen. While this certainly improves the viewing area, you need to find a way to balance the console screen and use just one of the controllers (or combine them on the controller pad). This makes things significantly less portable, so it's not ideal - however this is a limitation of the game's traditional format. It is nice that Chorus gave us this option regardless.

The game itself is lovely to look at - vibrant colours, smooth animation and appealing characters all mesh to form a cross between Pocky & Rocky (a SNES favourite) and more modern bullet hell fare. Difficulty can be adjusted, though I didn't struggle too much on standard, so if you're as skilled as Boris the Bullet Dodger (does a Snatch reference date me?), you need to crank it up to the top setting. How you do this is very comprehensive - from bullet size and speed to TBS size, the whole experience is very user-friendly.

There's no co-op, but that doesn't bother me on a game like this - your competition is always your previous hi-score.

There's not a lot to dislike with Sisters Royale - it achieves everything it sets out for with aplomb, and were it not for the tiring story mode (which isn't as charming as it thinks it is) I'd have a hard time not gushing over it. It's great value for money, polished and - most importantly - fun. I do love a game with a lighter tone, especially in this genre, so dive in, pick a sister and fight for your man!

9
Polished, attractive and fun, this is a great game at a bargain price. Load up!