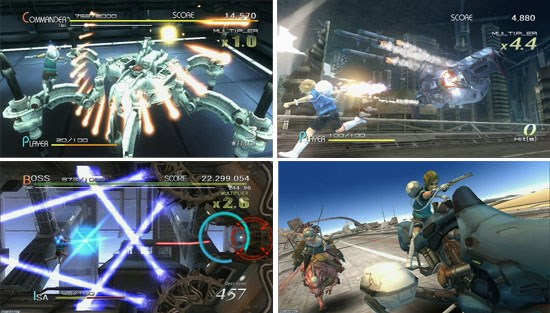 Sin & Punishment was one of those games that became a legend within game import circles. Coming out at the end of the N64 era and only in Japan, the game received cult status for being one of the best shoot-‘em-ups of its generation (the English translation was a big help here!)

It took Nintendo until 2007 to release the game via the Wii’s Virtual Console system where it saw an even larger surge in popularity. So Nintendo has finally decided to release a sequel, but does it measure up to the legend?

There is a story... something about half breeds, aliens, multiple Earths, big monsters and the discovery of one's humanity. To be honest, the script is so damn awful and cut-scenes so poorly acted, you wonder why anyone bothered to put them in the game at all. It’s hard to tell who is doing what and why - Just two people fleeing from some super powered bad guys and an army of soldiers/monsters. All you need to know is that they go down when shot.

Apart from the abysmal storyline, Sin & Punishment is probably going to be one of the best shoot-‘em-ups you've played in a very long time. It mixes a drop in and play for five minutes feeling with the desire to play it so much that you might actually start trying to shoot Keepers in your local street. The game handles the balance between casual and hardcore admirably. For the more laid-back gamer, you get multiple difficulty options, generous checkpoints after dying and a helpful auto-save function. The generous nature of the game ensures that it remains enjoyable even if you're initially hopeless.

For the hardcore, the game tests your shooting mettle, whilst egging you on with some serious scoreboard chasing (both on and offline).

It's the shooting game everyman, with enough addictive qualities to provide sustenance either audience. There's little to compare to the thrill of making it through a boss encounter with a slither of health left, or dying the hundredth time because you used the wrong tactic. The game is thoroughly fair with it's penalties, and if you die, it will be your fault.

So the gameplay is sublime, and for once, the control scheme isn't a hindrance. The Wii Remote/Nunchuk combo works wonderfully, and this is one of the few times that it outshines the classic controller. True, the purists will want to experience the game using the old-school method, but if the Wii was designed for any type of game, it would be the point and shoot genre. Here, Sin & Punishment is easily the advocate of this line of thought - stick to it and you’ll be swatting the enemy down like flies.

Even better, if you get bored, you can add in a friend to take up the reigns of the other character. Each character has a unique charge ability and different mode of transport. While the latter does little to the gameplay, the former forces you to change tact and is very much worth a second playthrough just to experience the alternative playing style.

Sin & Punishment: Successor of the Skies is a very pleasant surprise. Few developers capture the magic of their first game through a sequel, but of course Treasure is no ordinary developer. They have crafted a fantastically enjoyable and addictive game that is fun in small and large doses, a game which craves your attention whether it be straight after work or 4 in the morning.

Few games of this calibre come through the ranks often, especially on the Wii - Treasure just needs to hire a decent scriptwriter and cut-scene director to let us know what the heck is going on!

9
A poor script doesn’t stop this from being one of the best shooters of this generation.
LATEST REVIEWS
13 Sentinels: Aegis Rim (Switch)