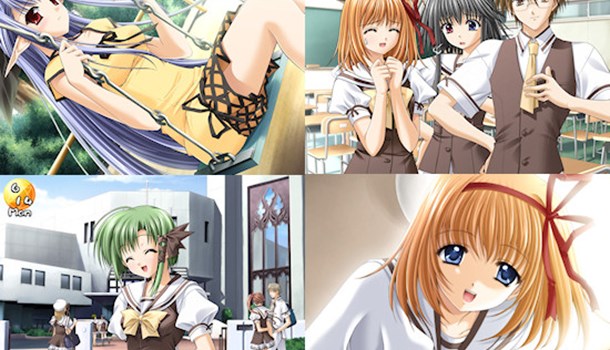 For many a teenaged male, it could be argued that talking to girls is like trying to interact with beings from another planet.  In the case of Navel's adult visual novel Shuffle however, talking to many of the girls literally involves communication with those from another world.

The reason for this soon becomes clear during the game's opening scenes, which introduce us to our protagonist Rin Tsuchimi, a run-of-the-mill seventeen year-old who attends high school and lives with his childhood friend Kaede Fuyou.  However, any sense of absolute normality is shattered as we're soon introduced to both gods and devils, which live alongside humans after the gateways between their various worlds were opened.  Far from beings with long, flowing beards or red horns and tails, there's little to differentiate humans from gods from devils aside from their ears, which conveniently means that there are a bevy of attractive girls for Rin to consider and fawn over as the story develops.

Indeed, aside from the other-worldly twist to its tale, Shuffle is very much an archetype of the adult visual novel genre, from its high school setting through to its variety of major characters that take in the childhood friend, protagonist with deceased parents and "under-aged looking girl that actually isn't, honest" stereotypes.  Even a large proportion of the five story routes available for the main female characters are very much grounded in reality, with shopping, cooking and eating at a nearby cafe featuring prominently alongside normal school concerns such as homework and exams... and a couple of sex scenes per major character, of course - This is a game for those eighteen and over after all.

As each arc progresses however, we do finally get to see the supernatural side of the series come to the fore in all but one route with various levels of success, making for some emotional twists and turns in each tale to try and move or otherwise surprise the player.  Personally, I only felt that this really worked well on one or two occasions with a couple of admittedly excellent scenes, whereas on a lot of other occasions the whole thing tended to fall a little flat when it comes to engendering any kind of emotional response.

Where Shuffle really stands out is in terms of its artwork, with some good character designs backed up by top-notch, detailed and attractive illustrations throughout - An important consideration given that it's one of the major drivers to keep the user playing beyond the storyline and multiple-choice branching affair that the title naturally consists of.  In fact, Shuffle is probably one of the more visually impressive visual novels to be given an official English translation that you'll find at present, which in itself makes it worth of consideration if you enjoy such aesthetic delights.

Overall then, Shuffle isn't really the kind of adult visual novel that succeeds in standing out on account of the strength of its concept or story, but it does perhaps offer itself up well as a way for anyone unfamiliar with this particular facet of Japanese game-playing culture to dip their toe into the proverbial water - It's uncomplicated and undemanding, there's nothing too extreme about its content, and above all it's genuinely beautifully illustrated in terms of its artwork.  If that's enough to draw you in and give it a go, then Shuffle might just be worthy of your time.

Shuffle! is currently available as a digital download from MangaGamer

6
Although its story and scenarios don't particularly stand out, Shuffle is nonetheless a visually arresting effort.
LATEST REVIEWS