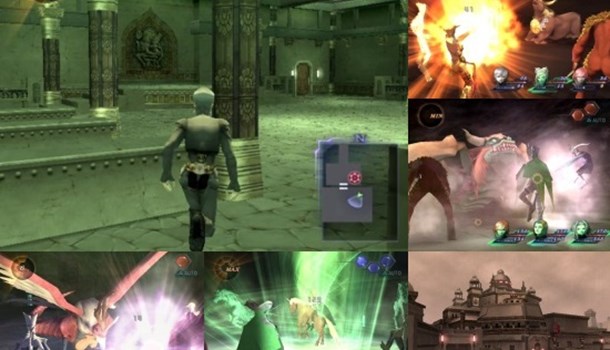 Originally released in Japan in 2004 and in Europe back in 2006, Digital Devil Saga now sees a release as part of the “PlayStation 2 Classics” range on the PlayStation 3 system. The PlayStation 2 Classics range takes games released on that console and releases them with no modifications - unlike HD remasters, PlayStation 2 Classics games do not have trophy support, nor have they had their graphics retouched, thus giving the player the same experience as if they were originally playing the game as it was released. That being said, Digital Devil Saga still runs at 720p and graphically holds up surprisingly well for a game that is ten years old. The main reason for this is in its art and character designs, effectively conveying the tone of the game and creating a rather grim and dark world for the player to discover.

Digital Devil Saga takes place in a barren post-apocalyptic wasteland known as the “Junkyard”, in which humanity has broken off into six different tribes all vying for dominance and territory. One day during a battle a mysterious pod releases light and brands all the residents of the Junkyard, resulting in everyone gaining the ability to transform into demons - with the ability to transform into a demon comes the huge price of an insatiable hunger that forces many to seek out others to devour in order to gain more power. Near the site of the pod, a mysterious girl is found and brought back to one of the home territory of a tribe known as the “Embryon”. The player takes the role of silent protagonist “Serph”, who is the leader of the Embryon - all tribe leaders are called to the neutral territory's temple and learn that they must now use their new power in order to destroy one another. The tribe that is left standing at the end will be allowed to ascend to Nirvana.

Digital Devil Saga is a turn-based RPG that is part from the Shin Megami Tensei series. While being a spin-off, it does make use of certain aspects of that franchise to distinguish itself as part of the series. This is evident in the use of demons and religious iconography - within Digital Devil Saga there are tons of Hinduism icons and references, with locations filled with statues, ornaments and even named after certain aspects of the religion.

The game has some rather dark themes - its central tenet revolves around the character's sudden development of emotions to go along with their newly acquired demonic powers, with each character in turn embodying one aspect of human emotion, which helps with their character development throughout the game. There are some rather interesting discussions on what certain emotions mean and how they factor into the actions and perspectives that characters take on situations. With the acquisition of demonic powers comes the need to devour other demons, a plot point which the game makes use of by incorporating it into it's narrative while the ability to devour enemies becomes a key gameplay mechanic in battles. The characters opinions on this are divided - even amongst members of the same faction some have accepted that eating their enemies is a necessary way to survive now, whilst others would prefer not to engage in this behaviour. As expected the enemies the player will face have clearly taken a firm stance on the matter, leading the way to some rather interesting moments with quite a few twists and turns throughout.

Those who have played other games in the Shin Megami Tensei series will find the battle mechanics of the game rather familiar, with the game using the “press turn” battle system. This system divides battles into two phases - the player's turn and the enemy's turn. Each side is given turns to use, and the amount they are given is based upon how many characters can make a move. The maximum team size for the player is three whilst enemies can have more than this, and the main aim in battles is to make use of enemy weaknesses and critical attacks in order to earn extra turns and to force the enemy into a frightened state which will make devouring them easier. Turns are represented by hexagons in the top-right corner of the screen - if a turn is used without making a critical hit or taking advantage of an enemy weakness, that hexagon will be used up. However if a critical hit is made or weakness taken advantage of then the hexagon will light up, denoting that another turn has been added and meaning that the most attacks the player can get from a single turn phase is six. Alongside this, the player also needs to prevent the enemy from taking advantage of weaknesses - there are various skills that can nullify elemental attacks, and finding the right balance of exploiting enemy weaknesses and protecting your own is crucial in surviving enemy encounters. Using these methods is also the best way to gain experience - when enemy weaknesses are exploited and their attacks are blocked, enemies enter a frightened state, at which point they take double damage from hunt skills. These skills when used allow the player to eat enemies, granting them more experience after battles. However, if the player is not careful with these skills it can cause the character who used the skill to get an upset stomach, negating the experience earned in battle. Luckily, certain skills learned later in the game can put a stop to this.

As well as its battle system, the game also boasts a very comprehensive customisation system in which the player can choose how their characters develop. The player can assign stat upgrades to Serph whenever he levels up, but can also decide which skills the characters can learn using the mantra system. At save points the player can access the temple's network and, by using money, they can download a mantra for characters to learn. Mantras are shown on a grid, with more unlocked as the player fully learns a mantra - in order to learn a mantra the player must defeat enemies but, as mentioned earlier, the best way to learn them is by devouring enemies. The mantras are divided into elemental magic skills, healing skills and physical attack skills, with the game allowing the player to fully customise their characters in any way they wish, providing they have the money to do so. However, the game also subtly makes it known which mantras are best for each character by designating their elemental affinities and weaknesses, and by how their stats increase when levelling up.

While the game does allow customisation of characters skills, there are times when not having the correct skill setup will make the game more difficult. Bosses tend to make use of certain attacks and have weaknesses and strengths against certain elements - thus, having the correct setup of skills can make things easier whilst having the wrong setup can make things much harder. The need to balance out skills in this way adds a bit of strategy to the game and makes the player think about how they want to develop their characters. By doing this the game makes the player put some thought into how to play the game instead of trying to rush through and rely on the same attacks over and over.  Along with this, enemy encounters can also be rather challenging on account of how smart the AI can be. Enemies will take advantage of elemental weaknesses and use support skills rather effectively to overwhelm the player - while things can get rather tough at times, it still manages to be fun thanks to how satisfying it feels to overcome obstacles like these in order to advance through the game.

Overall, Digital Devil Saga still holds up rather well. Its setting and themes make for a rather interesting world and RPG story, and it sports gameplay mechanics that are both surprisingly deep and offer quite a challenging experience that makes players think about how to upgrade their characters and what actions to take in battle. The result is a really fun game that will really appeal to those who love RPGs, so if you missed it when it was first released then this is a great opportunity to play it.

9
A dark and mature story complemented by challenging gameplay makes for a classic that RPG fans will love.