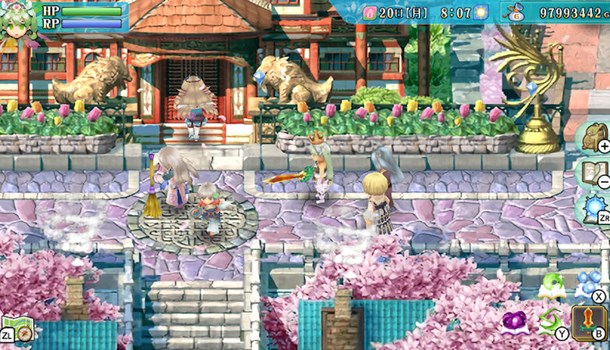 I'm always thrilled to give a new game ago. The sheer excitement of embarking on a new adventure. Sometimes you will be familiar with a franchise and already have a fair idea of what you had ahead of you. Alternatively you may just be excited by the title which clearly gives hints as to what you can expect.

Then I was sent Rune Factory 4. I'll be honest, whilst I suspected it was a role-playing game of some sort, I had no clue as to what would be involved and I was even more surprised that this was a fourth instalment of a game I hadn't come across before.

Rune Factory 4 I have subsequently discovered is actually the sixth iteration of the series. It is developed by Neverland and published by Marvelous. The first game was released on the Nintendo DS, where the sequels also found a home, migrating to the 3DS when that console had established itself. Later still, I've learned that Rune Factory is a spinoff series to the Harvest Moon games. Fair to say then that I am a complete novice when it comes to the Rune Factory series!

Rune Factory 4 appears to be the first to be ported onto other systems. The version being tested is the PS4 Special Edition, but having not played the 3DS version I'm unable to give comparisons. However, I gather that the only differences between this and the original is a new opening theme and an extra difficulty option.

Graphically the game still looks like a 3DS title, with no fancy upgrades or much in the way of additional polish. It still looks good though, with cute, bright characters and environments. Being published by Marvellous I expected the game to be crammed with ecchi from the outset, though it's evident very quickly that this a more wholesome family experience with no fan service, and as such was easy for my 7 year old son to pick up to play.

Whilst this is number 4 (or 6 in the series) this seemed no hindrance as the game launches into the story. You are on an airship to deliver a gift to the town of Selphia when you suddenly find yourself under attack by various thugs. A swift blow to the head lands your character with amnesia before you are unceremoniously thrown off the airship. When you arrive you are believed to resemble a member of the Royal family and so you are asked to fill that role and run the town.

You quickly get to know everyone in the area. Whilst you are taking on the role of "fill-in Prince", you are left to farm, fish and craft amongst a multitude of other useful tasks between spots of dungeon exploration and monster hunting.

The game is rich with activities that keep you busy and industrious. You can spend a lot of time tilling the land, planting various seeds and then watering and bringing in your crops to reap the financial reward, none of which has any impact on the narrative. Equally you can ignore the requests of your populace and just build up your combat skills which actually has depth and becomes somewhat rewarding as things progress.

There is also a romance layer where you find there are 6 eligible bachelors and bachelorettes in town. They all have their own personalities and only by fulfilling their tasks completely do you have a chance of wooing them.

The tone is relaxing and the idyllic situation will keep you engaged if you enjoy games that allow you to relax alongside swinging a sword. Save options are readily available so it's simple to pick up and put down as needed. It also has multiple layers that will interest everyone differently. My son loved the hack and slash adventure, while my wife preferred the romance. Personally I liked the fact I could dabble in any whenever I saw fit.

If you are more into straight forward role play games then you are more likely to be drawn to Final Fantasy 7 Remake, Ni no Kuni or a favourite of mine, Kingdom Hearts. None of those had the life simulator or farming elements that Rune Factory excels in.

If you would like a roleplay game that's a slower pace, layered and just fun to pick up then I couldn't recommend this enough. Those seeking adventure on a more epic scale may find their needs fulfilled more readily elsewhere.

Take a look at the trailer to get a feel for the game:

7
Charming, engaging and with plenty to keep you occupied, a great example of the Chill RPG