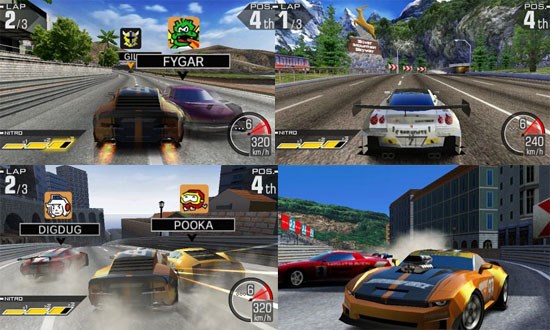 Saying that a Ridge Racer game will be available alongside the launch of a new console is like saying that the sun will set in the evening. Ridge Racer has been there for most if not all of the recent platform launches and the Nintendo 3DS is by no means different. After the disaster of Ridge Racer DS, will we get something that really burns some rubber for this new console?

At first glance, yes we will. The DS version of Ridge Racer was a disaster that was quickly forgotten, while the 3DS version is exactly what we would expect from a Ridge Racer game - easy to jump into gameplay, interesting tracks and a 3D effect that actually does help the experience of the game in some way. Some of the 3D visuals are obvious cheap gimmicks, such as planes flying into the screen, but there are times when it does feel that the 3D helps to judge the depth of corners when taking them, although this could be more a personal thing more than anything.

On the surface, Ridge Racer 3D is what we expect from a release in the series. But if we start scratching beneath it all, things aren’t as rosy. Veterans of the series will recognise most if not all the tracks from previous entries in the series. The single-player grand prix has a horrible habit of repeating tracks and doing reverse versions of the same circuits as well. With a grand prix campaign where there's a lot to work through, this can become very repetitive very quickly.

The main issue I have with Ridge Racer 3D is that everything is tried and trusted and there is nothing here that really pushes the boat out. I’m not saying it is a bad game, it is an entertaining title to play, but only in short bursts. Any more than that and the repetitiveness comes steam-rolling back in. The most grave oversight is the lack of online multi-player, which would of given the game some serious legs in the replayability area.

The game does contain wireless local multiplayer, but of course finding many people with a 3DS and a copy of Ridge Racer will take some doing at the moment. The standard modes are all in there, but there is nothing in there that we haven’t already seen before.

The game does make use of one of the 3DS’ premier features, the StreetPass system. Here you can exchange ghost data and play against times set by other players on the tracks. This is a fun little feature, but it obviously depends on how often you use StreetPass. If you happen to be heading to a town centre, have StreetPass on, you’d be surprised at what you pick up. I certainly was.

Graphics-wise the game does look very nice and about on par with the current PSP versions. There is nothing mind-blowing, but remembering the power the DS had to play with the extra abilities it can utilise has allowed this title to up the game. Again, while nothing mind-blowing, it does look good and the 3D effect just adds that little bit extra to it.

Ridge Racer 3D is by no means a bad game. It is easily the best racer on the system at the moment and gives you everything you could want from a Ridge Racer title. Played in fifteen minute chunks, you will no doubt get some good gaming times out of it - just don’t play for extended periods or the cracks will start showing.