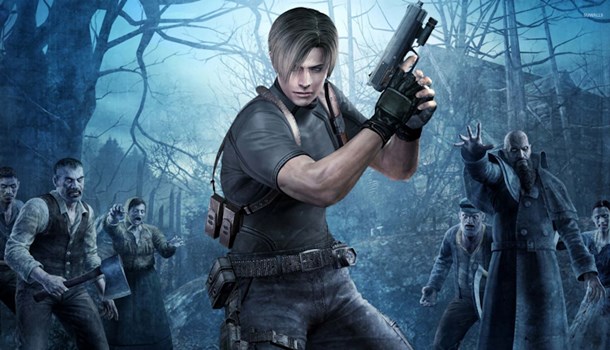 They say that evolution is necessary for anything to survive. That couldn't be any more true for the Resident Evil series. While there have been spin-offs like Gun Survivor and Res Evil's stumble onto online gaming with OutBreak, the actually core Resident Evil games haven't changed much since their hay day back on the original PlayStation in 1996. All that's to change with the release of one of the most anticipated Res Evil games to date.

Six years have passed since the outbreak and the total "cleansing" of Raccoon City. Leon S. Kennedy, once a rookie cop, is now working for a government agency working underneath the President of the United States. Sent to a remote village in Europe, Leon is looking for the President's daughter, Ashley, who has been kidnapped by an unknown terrorist group. Though as usual, Leon gets a lot more than he bargained for.

There have been some major, MAJOR improvements to this latest tale in the Resident Evil world. Not just from the obvious stand-point, which is of course the graphics, but also the control system and the death of the fixed camera angles. Res Evil 4 is now a happy third-person action-adventure. When aiming, a helpful over the shoulder view is switched to, which helps the player no end to view target certain parts of the creature and hopefully take it down quicker.

Yes, that's right, this time instead of pumping rounds in to any old part, you can now select "hit-zones" to ever bring a creature to its knees, take out the head quicker or even take the weapon out of their hands. Doing this allows for ammo to be conserved a lot more now, which you'll need because ammo is even more limited than ever before.

The major change is the setting. Gone is the mid-western town setting and now we have a unfamiliar backdrop of a European countryside. The zombies this time are smart. While they will still walk mindless towards you, they will dodge your aim, use their arms to shield their heads and you'll just love the chainsaw wielding maniac who will make your life a living hell. With rows upon rows of enemies heading towards you, running will always be the best option.

I could sit here all day and praise the game, but there are a few little niggles. The puzzle sections that used to be a major part of any Res Evil game seem to have been pushed aside to make way for more action, which will disappoint the Res Evil fans. Even after six years and special training, Leon still has the inability to move and shoot at the same time, though, this can be argued that it adds to the tense atmosphere and feel of the game.

Thankfully Resident Evil 4 is the game that has brought the Resident Evil series back from the dead. It has everything that an action junkie would want from a game and most importantly, its fun to play. It'll keep you glued to your screen right until the very end. There are few games that do that anymore, so dust of the GameCube and put in this baby. You won't be disappointed.
9
Its back from the dead
LATEST REVIEWS
13 Sentinels: Aegis Rim (Switch)