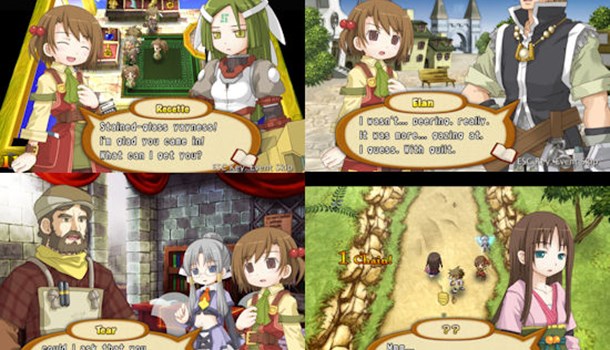 Being a kid is great, isn't it?  No responsibilities, plenty of time to sleep, no money hassles and a world full of fun every day.  At least, all of this is true until your father goes missing, leaving you a huge debt to pay off and a fairy threatening to respossess your home and all you own unless you can repay that debt sharpish.

Welcome to the world of Recette, who finds herself in just such a dilemma when a fairy called Tear knocks on her door to let her know that she's expected to service her father's debt, no questions asked.  Luckily for our plucky (and frankly quite adorable) heroine, her father just so happens to be the owner of a shop, and thus Recette is pressed into opening this shop in an attempt to pay off her debt and stave off the horror of living in a cardboard box.

So the scene is set for Recettear: An Item Shop's Tale, a trading game-cum-RPG which started life as an independent title developed in Japanese, now translated and released in English by Carpe Fulgur.  The basic objectives of the game are simple - use your "item shop" and a starting budget of 1,000 pix (the game's currency) to buy and sell goods with an eye to making as much profit as possible to pay off your debt, while also hiring adventurers to venture forth into an ever-expanding series of dungeons to slay the beasts within and hopefully pick up a whole bundle of additional goodies for you to sell.

Of course, in practice there are far more to the game's mechanics than just this - Every time a customer takes an item to the counter, you need to carefully choose your profit margin and be prepared to haggle to get a price that's acceptable for both parties, while you can also buy items from customers using a similar method.  As time goes on and you gain experience, you'll also be allowed to customise the look and size of your shop, employ vending machines, take advance orders for items, "fuse" items to create new, more extravagant goods to sell, and take advantage of price rises, drops and items growing or shrinking in popularity.

In short, Recettear gives you access to an entire economic climate in microcosm, yet somehow manages to make the whole endeavour unfailingly fun thanks to a decent range of different characters with their own unique spending habits, and dialogue that is frequently hilarious.  Indeed, it's the game's dialogue that really makes the game as a whole - although it's only sparsely voiced via its original Japanese audio, the text dialogue between characters is frequently laugh out loud funny and fantastically written from the cutesy and unfailingly positive Recette onwards.  I have no idea how close the translated text is to the Japanese original, but for once I don't care as the tone and whimsical nature of many of the conversations that go on as Recette goes about her business and wanders the town are simply perfect.

Although you might be quite content to spend your days chatting to characters and selling them stuff, eventually you'll have to pry yourself away from the shop and enter the realm of adventuring.  To do this, you need the business card of a qualified dungeon-goer, and as time goes on you'll find yourself with a collection of individuals you can go to when the urge (or necessity) for some hack-and-slash action hits you.  Each of these have their own special abilities and advantages, and of course setting out with them allows them to build up experience and thus "level up", making them more powerful and capable of taking on tougher dungeons and baddies.  In many ways, the dungeon roaming aspect of the game is arguable the weakest, with some rather iffy AI evident, but this is a relatively small blip against a game which keeps the experience fresh with a wealth of dungeons to fight through with random layouts every time you visit or revisit them to keep you on your toes.

The only other criticism which could be levelled at Recettear is that it's too easy - paying off your father's debt takes a while but it's done and dusted pretty quickly; removing the primary aim of the game gives you no explicit goal to work towards, although if you're a fan of more sandbox-led titles then this is actually a bonus as it allows you to play the game however you like without worrying about hording money to pay off the debt collectors.  Given the size of the game as a whole in terms of characters, dungeons and room to grow your item shop, it's a non-issue if you can live without critical challenges being thrown at you on a regular basis.

Overall, it's almost impossible to describe just how fun (and more importantly addictive) Recettear: An Item Shop's Tale is by describing its game elements alone - individually, none of these concepts are anything new, but when rolled together in such a light-hearted, funny and polished package they become some kind of PC gaming crack cocaine.  The number of hours you'll end up sinking into this game makes its £13 price point an absolute bargain of the highest degree, while its low system requirements and simple visuals mean that anyone should be able to pick up and play the title.  Carpe Fulgur have done a fantastic job of localising the releasing this gem of a title - it's been a long time since a game has eaten up so much of my time, and even longer since a game made me laugh out loud over and over again.  Capitalism, ho!

Recettear: An Item Shop's Tale is available for the PC via digital download from various outlets - More details can be found on the Carpe Fulgur web site, where a free demo is also available.

8
This is probably the most addictive game you'll play all year, and it's also certain to be the funniest. Yayness!
LATEST REVIEWS
13 Sentinels: Aegis Rim (Switch)