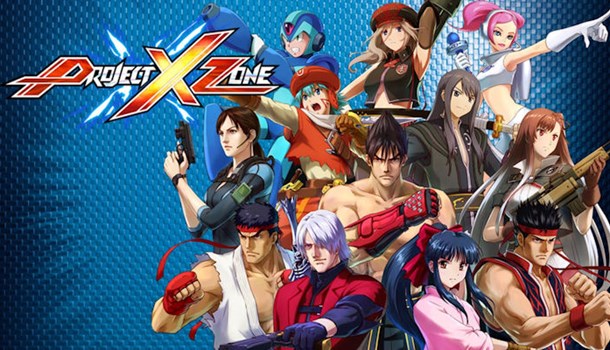 Project X Zone will always have a special place in my heart thanks to the way in which I was introduced to it. During my second trip to Japan and my second TGS, I wondered which game would take pride of place on the escalators leading to the main hall. The previous year Namco Bandai used it to announce the sublime Gundam vs on PS3, which was already a favourite thanks to my time with the game on PSP and in Japanese arcades. Last year, the gorgeous artwork from Project X Zone adorned the walls and I instantly knew 2 things: firstly, I wanted the game more than oxygen, and secondly, that we'd never, ever see it translated.

Well, it doesn't hurt to be wrong occasionally.

Project X Zone follows a peculiarly Japanese tradition of mashing franchises together to create a fan-service mash-up. Whether it's in fighting genres (in which Capcom excels in particular) or RPG's such as Nintendo's delightful Captain Rainbow, these games are loving tributes to fans who fantasize about such mash-ups. Project X Zone follows this tradition and drives it down the action-RPG route.

The game itself follows the theft of a mystic stone taken from the Kouryuji family, who throughout generation has protected it and mankind from evil interlopers. With the stone missing, it falls to the buxom Mii Kouryuji and private detective Kogoro Tenzai to locate the stone.

One of the first things that struck me about the game, after I'd finished drooling at the opening animation, was how fractured the initial narrative is. There are five "prelude" episodes that see you flitting between major characters such as the aforementioned Mii, Ryu/Ken & Juri from Street Fighter, Jin and Xiayou from Tekken, Haken Browning & Kaguya Nanbu from Super Robot Taisen, various members of Darkstalkers and Devil May Cry's Dante. And that's just the first 10 minutes!

It's certainly a head-rush, but each stage teaches you the basic mechanics of play, which is essentially a tactical RPG along the lines of the superb Fire Emblem. The area grid allows you to place your team and break/examine objects, while battles are carried out in real-time where you control your characters directly.

In all honesty the mechanics of combat feel a bit loose - there's none of the snappy intuitive nature of Fire Emblem here, it's a button-mashers dream in which stats bounce around the screen at will - this makes tactical play muddier, and while it certainly appeals, after a while you do start to long for a more intellectual battle system.

But it does the job. What really gets Project X Zone out of 6/10 territory is the sheer glee that hardcore gamers will undoubtedly feel as they start to mix and match genre icons. It doesn't hurt that the graphics are wonderful - seeing an ickle chibi Juri from Street Fighter IV walk around the screen is just delightful, and the battle screen characters are just as cute and loveable. The beautiful animation is also an utter delight, and there's nothing better than watching a new set of characters arrive accompanied by their signature theme tunes.

In fact, the development team has pulled a bit of a fast one here - they've produced a game that's almost impossible to hate. Even if they'd managed to completely balls up the gameplay, you'd have a hard time telling them off because the entire experience is just so utterly darling that you'd feel like you were scolding the fluffiest of puppies. The evil, twisted, geniuses.

Happily Project X Zone plays well. For all it's fractured narrative and slightly shallow combat mechanics, this is a fun game made for people who love games. I can't understate how unlikely this whole project is either - to get this released in English took huge balls from the powers-that-be, and just shows that just occasionally my pessimism about the 3DS is unwarranted. True, we may have missed out on EX Hunters (damn you to Hades Capcom!) but they've given us a little gift here, so I suggest you grab it and maybe (just maybe) convince the Japanese gaming giants that these characters are loved outside Japan as well.

Now, if only we'd been given access to the lovely limited edition that the US enjoyed I could have been completely content, but the baffling decision to limit these to a Facebook competition only makes my eyes all weepy. Still, better to go Vanilla than get stiffed entirely. Therefore Namco Bandai Games gets an appreciative handshake rather than a fawning, grovelly thank you.

7
Fun, vivacious and delightful to spend time with, just this once the aesthetic and charm really do mask the unremarkable mechanics.