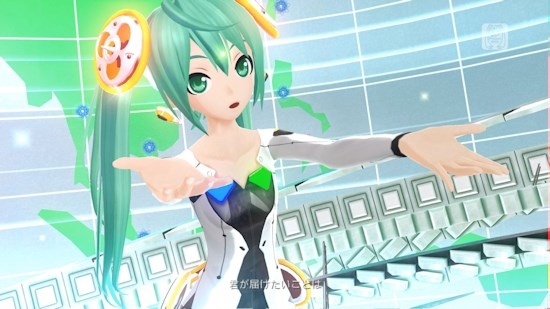 Whenever friends break out Rock Band or Singstar and gloat outrageously over how they’ve bagged the top score on the most difficult track of the day, I tend to sit back in the corner and smile a smug little grin. You see, I know that their accomplishments seem grand as they flaunt their expensive plastic instruments, but I also know the truth of how simple they really are. Don’t get me wrong, I’m not good at these games by any stretch of the imagination, but I’ve been exposed to the hardcore of the rhythm game, the Dark Souls to their Streets of Rage if you will. I’m talking, of course, of the Project Diva series. Don’t be fooled by Miku’s friendly, welcoming smile or the cute way she spins her leek – she’s out to get you and bring you down hard! So with Project Diva f finally hitting the West on Vita (albeit somewhat disappointingly in the same month as the sequel hits Japan) it’s time to go back down the rabbit hole and see if the little minx is still as hatefully addictive as ever.

As with any rhythm game, the core concept is as simple as can be – symbols come up on the screen; press the corresponding button to keep going. Project Diva however makes things a little more interesting. You seem, rather than a simple A-B track that notes move along, the notes in Diva come at you from all angles to create a dizzying array of button prompts and timers as you frantically try and make sure you’re ready in time for the next sequence. Still, as an old hand of the franchise I was ready for whatever Miku was going to throw at me. I had no fear. Shortly later, after failing the first track within the first ten notes, I sheepishly exited out to go through the tutorial again to figure out what on Earth I was supposed to do with these new-fangled star notes. One of two new features to the main gameplay turned out to be the new touch-screen notes (which can be set to use the front, rear or both touch screens as you like) which essentially work to add a ninth possible command to make things that little bit more challenging. Along with these are new ‘technical sections’ which pop up a couple of times in each track, giving you the chance to grab some much-needed extra points if you can hit a certain number of notes in a row.

Need those points you certainly will, too. I may have possibly given the slightest hints here and there in the above paragraphs that Project Diva is a little difficult. Well, let’s not beat around the bush further. Miku hates you - she and all her little Vocaloid pals have teamed up with SEGA to make your life a nightmare. Make no mistake – every aspect of the main game is designed to help you fail. The screen is covered in a variety of gauges, score meters and subtitles to distract you. Every note has a moving timer showing how long till you have to hit it but every note has this going at once to make you lose track of what you’re looking at. Every note you hit throws up a comment on how well you did at matching the timing and worse, when you do well it gives you a count of your combo which you are guaranteed to lose once you notice you’re doing well.

The timing of the notes shifts subtly along with the sequence to be slightly off the beat or at just a slightly different speed than what you were expecting, and throughout the song an amazingly well animated music video will play, but again this exists solely to punish you as you forget to watch the notes or the graphics of the video itself makes the notes harder to see. Your reward for pushing through and managing to pass all of these hurdles will almost certainly be the glorious rating of ‘standard’ as you grit yourself for another run - then you’ll have that second run and the third, fourth and fifth too as you pursue that golden passing score that’ll make Miku praise you. It is, simply put, one of the most addictive games you’ll ever play. It’s the Japanese equivalent of Bejeweled or Peggle – put it on for five minutes and you’ll still be there in an hour. This being said, the difficulty has been adjusted for Project Diva f and very few tracks gave me the same kind of trouble on normal as I’ve had in previous games. To make sure it wasn’t just experience that was helping me out I had a friend play a few tracks and whilst he failed fairly consistently he still did a lot better than I was expecting.

Alongside the main game, Project Diva f is busting with extra goodies to keep you occupied, including an edit mode to allow you to craft your own fiendish works and a shop where you can spend points earned in the main game on everything from items to help you out to new costumes for the game's cast (go-go nekomimi!) to, erm... furniture. This is for the game's ‘Diva Room’ feature, where you can visit one of the idols in a room and give her presents and... well, poke them. In theory, figure out the right way to pet them and give them gifts and they’ll pay simple games with you but there’s obviously a knack to it as after a few minutes trying to figure it out Miku just got angry at me and shouted a lot. There’s also an Alternate Reality feature to have Miku perform live in your living room, but there’s a slight catch here as it requires a special AR card which came with the game in Japan but obviously isn’t available with the download-only version we’re getting. You’ll need to do a quick Internet search and print one off to make use of it.

There are a few niggles with the game that we should mention. Whilst there’s nothing wrong with the song selection per se it’s not the best either, and it lacks tracks like the previous game's PoPiPo which keep you humming along for weeks after you last played it. It’s also a real shame that ‘Black Rock Shooter’ doesn’t get something more closely resembling its original music video since the iconic characters are half the reason it’s so popular. The touch screen integration feels really tacked on as well (one might even suspect Sony of insisting on its presence). It’s fiddly and requires you to move your hands further from the buttons than you’d like unless you have long and flexible fingers, and it’s not always good at detecting input when you have to hit multiple notes in quick succession. Fortunately Sega seem to have realised this and the touch screen notes tend to be segmented off on their own, but this only serves to highlight that they don’t really fit.

Still, this is by far one of the most fun titles around at the moment on the Vita., and with Project Diva F 2 announced for Europe already it’s hopefully only going to be the first of many Project Diva titles to finally start hitting our shores. So get out (or stay in, as it's a digital download!), grab yourself a copy and get ready to start your new gaming addiction - you won’t regret it.