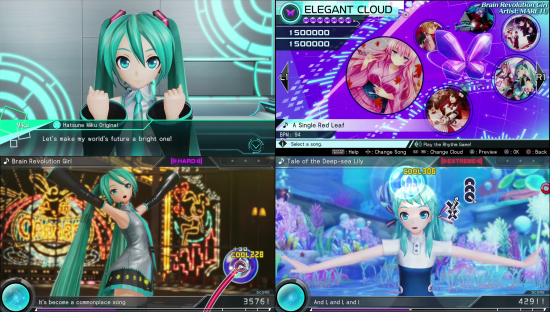 Another year passes and another iteration of the Project Diva franchise makes its way west with a translation. Project Diva X, released on both Playstation Vita and on the PS4 in an HD format, is the newest version of the franchise, but is Project Diva X an improvement over its predecessors?

Project Diva X is the first of the series to try and give the rhythm game element a point or purpose. Since the last iteration the developers have added a story. Colour me sceptical but when I read that someone had decided to mix a visual novel into the Project Diva format, I honestly thought that it couldn’t work and now, having played through the game, followed the meaningless decision selections and unlocked the songs, I think my original scepticism was right. I don’t think this new feature really adds anything to the game which wasn’t there before. In fact, I think that this feature has actually reduced the game from its pure rhythm-based roots.

Project Diva X comes with six "clouds" which are all based around themes - cool, quirky, classic and cute being some examples. When you unlock a new cloud, you have to complete all five songs and then a longer medley to complete and unlock the next cloud. The game prompts you to complete set events during the story, usually resulting in a very cute cut scene upon success.

The core gameplay has changed from Project Diva F 2nd - gone is the ludicrous star-shape system which made it almost unplayable at times, and back is the older system introduced in Project Diva F where the stars are triggered using either the joysticks or touch controls. The game has added some new elements to the gameplay in the form of rush notes, whereby you need to hammer the buttons to boost your voltage, itself a new addition that behaves similarly to the sustain notes from Taiko no Tatsujin. Also changed is the power up system, which has been replaced with modules. Modules are another name for the accessories and dresses which you can use on the various Vocaloids. By dressing your character up in certain complimentary combinations of accessories and dresses - for example, if you pair up the dog ears and tail, you gain a bonus for “doggy style” (Excuse me while I raise an eyebrow - Ed). These modules can be earned from getting good scores on songs or, if you feel quite lazy, by purchasing the DLC.

Project Diva X still allows you to interact with your favourite character through the power of gifts, except now the more your favourite character loves you, the greater is their ability to gather voltage and score. Each character now gives hints after each song saying what kind of gift they want, removing the old guessing game. However the game has removed the ability to actually purchase gifts (or at least I haven’t been able to find it yet if a shop does exist).

The ability to free play songs still remains and the old interface has been maintained when it comes to song selection. The game itself comes with 31 songs, with more added later through DLC. This is a pretty poor showing in terms of numbers and variety of songs, especially when you consider that the Project Diva Future Tone game, which is currently a Japan-only title, comes with over 200 songs. This selection is made worse by the game having very few signature songs.

Project Diva X supports cross-play with its bigger brother PlayStation 4 version. The two games share the same core gameplay and features, with few differences between them. The only noticeable difference found so far is in the rendering and previews of the characters when they are being dressed and the quality of the music videos. That, and the game being much easier to play on the PSVita due to the superior timing of the buttons and display calibration.

Once you get past these additions to the game play, Project Diva X is truly just another sequel. Although the game tries to boost the player's interaction with the Vocaloids, I am not convinced of its success. The game is a poor imitation of a visual novel and none of the decisions or options have any bearing on the game whatsoever. The actual writing is basic, and lacks any kind of voice acting.

While I think that the developers have made the game better than its predecessors, but I would personally prefer to have more songs, more variety and more classic hits than a visual novel. I have enough of those. However the module system and the upgrades to the game engine itself provide a big bonus and have fixed many of the issues I had with Project Diva F 2nd. So, considering I am a compulsive buyer of anything Project Diva and for the improvements alone, Project Diva X is worth a punt. However, if SEGA feels like they want to localise the Project Diva Future Tone game, I’ll love you forever...

7
An improvement on the previous Project Diva F games, but lacking in choice.