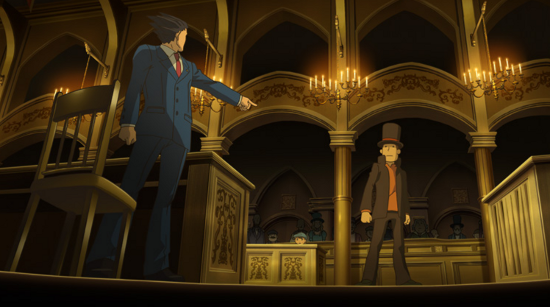 Full admission: I had mentally consigned this game to a “This will never come out here” list when it was announced, so imagine my surprise when I saw it in my local supermarket! Is this a case of two great tastes working better together, or an objectionable mind-bender of a mash-up?

While minding their own business, both Professor Layton and Phoenix Wright get entangled with a young girl named Espella Cantabella, who is in varying degrees of danger and distress. Both Phoenix and Layton do their best to help the mysterious girl, and through accident get sucked into an equally mysterious magical book that she possesses - the Historia Labyrinthia. Deposited into a pseudo-medieval town, the strangers must join together to unravel the mysteries behind the town and its witchcraft problem - an adventure that may see them sentenced to a pit of fire in one of the town’s witch trials, if they are not careful.

Before release, my primary concern was how the different sets of characters would interact, and whether this would feel “clunky”. Thankfully they work very well together with one slight exception - Layton is almost always ahead of the game, which contrasts badly with Wright being a clueless goober. Sure, half the point of Wright’s character is that due to faith in his client and turning the case on its head he can see the truth, but it gets a bit weird from a gameplay perspective when Layton has already figured it all out and has left both you and the rest of the cast behind.

Still, the various character interactions are very well done and bring a lot of charm to the game. Maya and Luke having a midnight stroll and a chat at one point in particular is a standout moment. It is honestly great to see Maya again, especially after Dual Destinies barely referenced her. She’s in fine form here and quite honestly her presence was a large part behind me picking up the game. The way the game introduces the two pairs of characters to each other also deserves praise - it does this in a really seamless way that is pretty damn funny. In both cases it is nice to have the two principal characters from each property present without their extended casts tagging along for the ride, giving the game a nice clean cast and the space to introduce its own characters, who are pretty memorable in their own right.

While the cast meshes well, the merging of gameplay styles feel out of sync - Layton’s plot thread/mystery-based pacing trips over Phoenix Wright’s linear series of self-contained cases and creates a very confused tempo to proceedings. The “Mysteries” element from the Layton games, which keep track of the various ongoing plot threads, is present but feel tacked on. At one point four of them are resolved en masse when there are still on-going plot questions surrounding them, which almost felt like the writing staff were throwing their hands up in defeat. The pacing also feels disjointed for a number of reasons. Firstly it feels like the game is “ending” for nearly 40% of its total runtime, constantly teasing that all is to be revealed but keeping relief just out of reach as it piles more things onto your plate.  This isn’t helped when the chapter titles have really final-sounding names! Even the “Epilogue” chapter is premature as it finishes before the primary plot revelations have taken place.

The ending itself, when it does come, is surprisingly well done and deserves to be highlighted. The game sets up a lot of conflicting plot threads and manages to tie them together at the end with a surprising degree of craft and confidence, playing well off of the suspension of disbelief that it has gotten you to invest. There are admittedly some loose ends and dropped cast members, some of which happen rather ingloriously, but nothing that derails the overall experience. The story also delves into damn dark places at times, covering some murky themes and events.  At one point in the middle of the game things got so grim (and frankly misogynist) that it was in serious danger of turning me off of the game, but thankfully it manages to pull out of this possible nosedive stronger for the experience.

The other pacing issue is that the game world doesn’t feel like it had time to “breathe” - there are few optional puzzles and while I did not do everything on offer it feels that the game does a lot of setting up and then doesn’t let you fully explore or interact with the world it has constructed; you are too busy being shuttled around by the demands of the plot and this clamps down on the ability to explore. I felt there were a lot of unrealised stories waiting to be told in the game - the cast and setting are certainly in place for this to happen! This is because the game is surprisingly linear, especially given previous Professor Layton games, giving you at least some degree of free rein to explore and sniff out puzzles. By the same token, the game also excises most of the “Exploration/clue gathering” part of Phoenix Wright games - some is still there, but nowhere near as built out as in its own games.

It has to be noted that the game looks very pretty. Everything has clearly had a lot of love lavished upon it, and a lot of personality injected into both the design and motion. The clash in art styles between Layton and Wright is initially striking, especially as you bounce directly from one back to the other at the start of the game, but a balance is struck when the cast is united in Labyrinthia and a happy medium is reached there. After a couple of hours the differences in style cease to register and it feels entirely natural - this is helped by the juxtaposition of having most of the main characters be strangers in a strange land, so of course they would look out of place. One thing that did strike me is that the colour pallette, particularly for the Ace Attorney characters, looks somewhat washed out and not as “punchy” as you might expect.

While I rarely used it the 3D works well in this game, providing some nice depth to scenes much like it did in Phoenix Wright: Dual Destinies. The game does have some very ropey frame rate issues however, even when set to 2D - whenever more than two characters are on-screen it starts to chug and the characters turn into creepy animatronic robots. This thankfully happens rarely but does pull you out of the experience whenever it crops up.

The music is amazing, it has to be said. This is especially true of the re-mixed versions of the various key themes from each series, which play around with composition just enough to feel fresh without losing what made them special in the first place. The voice acting is pretty dang bad though, sadly. Layton and Luke sound fine but the majority of the rest of the characters sound weak. A lot of this feels like poor direction - line delivery falls flat, halting and unsure of itself. It is worth noting that the voice actor for Phoenix is not the same as for Dual Destinies, which may explain why his voice in particular is very jarring.

In the court segments you get the requisite new gimmick for the game - cross-examining multiple witnesses at the same time! This is a very welcome addition that adds some required depth and difficulty as a lot of other court elements are much simpler than in other games. While this helps prevent situations where you have buckets of stuff to choose from and end up picking almost at random, I felt this made the cases too simplistic. In fact in some cases the game withholds case elements from the court record, making you feel like you have to fumble around to guess what the game wants you to do. You also have a cool-looking book of magic spells as an additional source of evidence, but sadly this part of the game is criminally under-used and when needed it is signposted to heck and back.

Perhaps as a favour to those who prefer the Layton gameplay, you can hint coin your way through the court sections if you don’t fancy it - while this is good for content tourists, I felt that it was making the game an utter cake walk as each hint coin gives you a lot of information. This is in stark contrast to the puzzles, where often you need to spend three hint coins to get something useful. One annoying quality of life issue here is that you can no longer hold the touchscreen button down to speed up text you have already seen once, like in Dual Destinies. I really missed that.

The puzzles on offer are nicely varied and a lot of them have at least some degree of direct plot relevance so there is no uncanny valley of contrivance that would otherwise make you exclaim “why is this person talking about bloody puzzles?”.

While it is not without flaw I really enjoyed Professor Layton vs Phoenix Wright - while slightly on the easy side it held my attention the whole way through and really delivered, both in gameplay and in story. The story in particular was satisfying to a magnitude I did not think it could pull off, especially for what I originally thought would “just be a fan service-y crossover game”. Both Capcom and Level-5 swung for the fences with this game and delivered something pretty damn special.