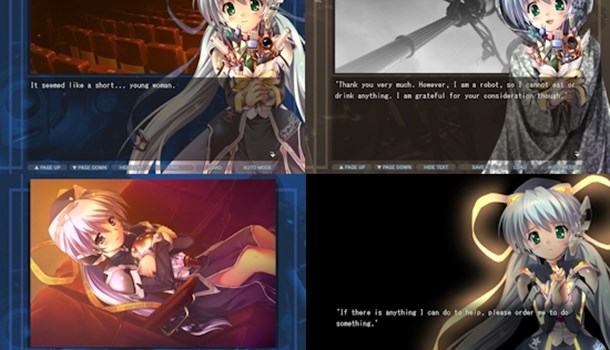 You know what the worst thing about a post-apocalyptic world is? The lack of anyone to really talk  to. In a world where people would rather fire a rocket at you than complement you on your choice of attire, simply living your life and trying to survive can become a tiresome affair. Although he may not realise it, this is at least partly what ails the protagonist in Planetarian, a Key "kinetic novel" that has finally made its way legally to the PC via Steam, and courtesy of Sekai Project.

Let's start by explaining exactly what the phrase "kinetic novel" means - rather than the more traditional visual novels that the company is famed for, there are no branches or user-driven choices to be made in Planetarian; instead, you simply read the story (which is fully voiced and with the usual selection of visuals, background music and sound effects you'd expect from such a title) and immerse yourself in its tale without any real interactivity beyond clicking through to move the story forward.

As we've alluded to in our introductory paragraph, the title whisks us away to a world that has been shattered utterly by a so-called "Great War", which has left the populace absolutely decimated and the small, remaining pockets of humanity to fight both one another and the after-effects of this conflict for whatever remaining resources are available to aid their survival. Given that those after-effects include constant rain laced with toxic chemicals and armed military robots roaming the land, it's fair to say that life isn't easy for those remaining, especially given how fruitless existence seems to be.

In the midst of this fight for survival, it's a shock on multiple levels for our protagonist when his scavenging brings him into contact with a young woman named Hoshino Yumemi who excitedly welcomes him to the planetarium within the department store which effectively acts as her home. This cheerful girl is, quite literally, no ordinary human, and her incessant chattering is nothing but an unwanted distraction - however, there's something novel about this girl, the world to which she holds the key and the sense of companionship that she presents that means that this man simply can't leave his new "friend" alone, and as time passes this brings about some seismic changes in his attitude to life.

Compared to the large, sprawling stories of your average visual novel, Planetarian is short but sweet - it quickly becomes clear in which direction its narrative is headed, which places the focus firmly on how the story builds its characters and scenario to that almost inevitable conclusion. In that sense the entire story is really just in service to that final pay-off, but thankfully it has enough to it to remain engaging, with just the right amount of humour to spruce up its otherwise bleak story, even if the shift between these lighter moments and the darker overall tone of the novel can sometimes be a little jarring. The presence of just two characters does limit the breadth of the story, but again this also feeds into its denouement quite expertly.

In many ways, that ending - when it comes - is exactly what you'd expect from Key. At a base level it's a manipulative affair, specifically designed to create a particular emotional response in the same way that key moments of a horror movie are designed to scare you. For some, this kind of manipulation simply isn't satisfying (or they're simply immune to it), but if you are receptive to this particular manner of story-telling and "toying" with your emotions, then the climax to Planetarian is a heart-rending and powerful one that delivers markedly on its build-up.

The story is also helped along by a proficient translation that doesn't suffer from any noticeable spelling or grammatical errors that we managed to pinpoint. There isn't a huge amount to speak of in terms of the game's art, which also serves to leave it heavily reliant on its narrative over and above anything else that it purports to offer, although its soundtrack is mostly pleasant and rarely grates even after several hours of concerted time with it.

Although it only clocks in at a few hours, Planetarian is certainly a short but sweet experience - if you're well-versed in Key's visual novels then you'll most likely be champing at the bit for this one too, as it offers the core experience of their other offerings even without any interactivity to speak of, and if you're new to said developer's particular brand of story-telling then this is a short introduction to the kind of tear-jerking fare for which they have become renowned.

Planetarian certainly sits on the "not a game" side of the "is it a game?" debate, but knowingly so and provided you're aware that you're sitting down to be presented with a story rather than any kind of interactive scenario then it's a story that is well worth taking a look at.

7
A short but ultimately moving story that is an enjoyable experience as long as you're comfortable with its lack of interactivity.
LATEST REVIEWS
13 Sentinels: Aegis Rim (Switch)