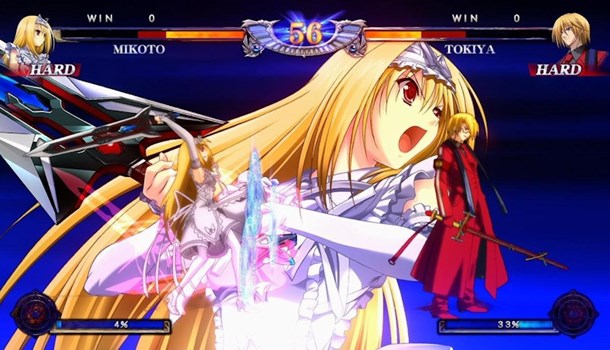 Phantom Breaker is a 2D fighter for the Xbox 360, available only in Japan. Never let it be said we don't track down the niche stuff!

The storyline, as with any fighting game, is pretty inconsequential to the action on the screen. In Phantom Breaker, a mysterious organisation known as Phantom has arranged a fighting tournament in Tokyo, the winner of which gets granted any wish they desire... Even by fighting game standards that's pretty thin, but it's enough to get 14 protagonists beating merry hell out of each other, and that's what counts.

The game is typical of most modern fighters - you have an initial roster of 10 characters to select from, all armed with a signature weapon and their own special moves.

Unlike most games however, the controls are mapped to single button presses. You have 3 normal attacks, low, medium and hard (X,Y,B respectively) and special attacks mapped to A. There are no fireball motions to master, everything can be accessed by a combination of buttons/directions, and the shoulder buttons even supply the button combinations used most in the game (X+Y for example).

You can also select one of two modes for each character: Quick and Hard (no sniggering at the back there!). Quick favours combos and rush attacks, whilst Hard concentrates on defensive moves and more powerful blows.

Fighting purists may balk at such a simple control scheme, and indeed the level of skill required to pull off super moves is greatly reduced compared to more technical fighters such as Street Fighter or Blazblue, but what this allows is for the mechanics to be put to one side and the strategy to come to the fore. Moves can be countered, or even counter-countered depending on your timing, and matches are played out like games of chess, which is always the essence of great fighters anyway - this simplification opens up this facet to the novice, and can be enormous fun when played in a group. Button-mashers will still get caned by those who know what they're doing, but at least everyone has a chance of really getting to grips with the game in a short timeframe.

The characters are nicely varied, and balance well overall. You'll soon find your favourites, as I did; Cocoa (the vampire maid with the giant claw) plays like Wolverine from Marvel vs Capcom, Yahuza the ninja schoolgirl has a great line in fast moves and teleports, and Waka is well balanced with her Naginata (spear), for long distance moves and a devastating uppercut. Other characters should suit everyone from the power characters through to rush types.

The roster is boosted by 4 hidden characters, including 2 very cool guest characters: Rimi Sakihata from Chaos: Head Noah (a visual novel) and Kurisu Makise from Steins; Gate. Fans of either series should be happy to see them in the game, although unlocking them requires a lot of work and strict match conditions, which is a real pain.

One of the main draws for Phantom Breaker is the HD visuals. Where Arcana Heart and King of Fighters have yet to embrace HD sprites, Phantom Breaker has jumped straight in, and therefore competes with the likes of Blazblue. In this regard it's really no contest - while Phantom Breaker's characters are lively enough, the lack of detail in each character design and the often surreal poses the characters end up in (especially when defeated) leaves Blazblue untouched in terms of presentation.

Even the opening animation is sparse, with no more than the static character shots scrolling across the screen to the background music. It's stark contrast to games like Blazblue and Street Fighter which go all out to get you pumped for the game before it starts with complex music videos.

Likewise the backgrounds, based on real-world locations in Japan a'la Arcana Heart, don't benefit from much imagination. They do have the benefit of changing in each round (moving closer to a landmark and moving the time of day forward) but overall it's uninspiring stuff. It takes the last level to really lift the bar, with your character fighting the boss, Infinity (the character, not the concept), on a spinning pentagram above a 3D Tokyo skyline in a storm. If only they had all been so bold.

God, it sounds like a poor midi collection from the 90's. Do yourself a favour, stick something on the stereo (may I suggest ONE OK ROCK) and play to something with some meat on its bones.

This is the real letdown - there are no extra modes, gallery items, alt colours to unlock, trophies or anything beyond the unlockable characters, which makes this a very dry release. There's just not enough to keep going at to keep it sat at the top of your collection for long. It may be fun, but it isn't deep and therefore it's pretty forgettable stuff in the end.

Your average fighting game fan isn't going to get excited by what's on offer here. The fighting is fun, but shallow, the presentation is lacklustre, and given the quality of the genre at the moment, Phantom Breaker is likely to get forgotten pretty quickly.

The game is fun while it lasts, and features some lovely character designs, but you'd need to be an anime fan to get the most out of it.

If you are interested, Amazon US has this listed for a January 31st release, so an EU release may not be entirely off the cards... Otherwise invest in Blazblue and Arcana Heart before going for this.

6
Fans of anime-inspired games will enjoy this more than others, but it remains a solid fighter that's easy to get into, if ultimately lightweight.