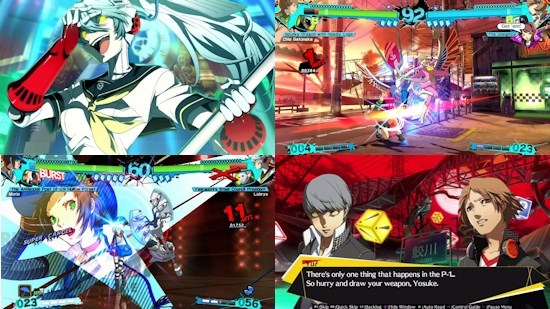 After a lot of initial hype and excitement, it's entirely fair to say that the European release of Persona 4 Arena was a disaster - thanks to significant (and frankly ridiculous) delays and the US version of the game proving to be surprisingly region-locked even on the normally region-free PlayStation 3, by the time the game finally landed in the UK it had been all-but forgotten by the online fighting community, while any buzz surrounding it had died down to little more than a whimper.

Thankfully the arena (with every pun intended) is a little more favourable for this follow-up game to the original Persona-themed fighting game - yes, we've had to wait a little longer for its UK release but the delay isn't a massive one, but those with the will to do so could have imported a US copy without issue so the game has been readily available to those with the desire to pick it up and play it.

Mechanically speaking, little has changed within Persona 4 Arena Ultimax in terms of its broad strokes - it's still very much the same beast as the original game when you actually pick it up and play it. To our mind, this is no bad thing, as Persona 4 Arena is a rarity in that it's a fighting game that welcomes all-comers - if you're a blind button masher (as per this reviewer) then the game provides easy to remember and use combos that will make you feel at least vaguely proficient and capable of taking on the computer without being beaten to a pulp over and over, while those with a talent for picking up and learning exquisite special moves and combos will have plenty to discover and perfect to unleash upon unsuspecting victims. In terms of pure playability, I can't think of a fighting game that I've had more fun with as a novice - you'll still get creamed by better human players, but taking on the computer feels satisfying and a little strategy and thought can take you some way even without an incredible memory of every nuanced move of a character. For those more advanced players, there are tweaks and additional skills available to be mastered that might add enough new possibilities to encourage them to pick up Ultimax, but judging by the lack of discussion around the game in the circles we inhabit, it may be too little too late for any hope of the franchise being taken seriously in the long-term.

One of the big additions which both tweaks the mechanics of playing the game and firms up Ultimax's roster is the addition of Shadow characters to most of the main players in the game - not only does this offer up additional character types to choose from, it also gives players some more offensively-minded individuals to play with, geared as they are towards building and using SP for special skills over HP and defensive play, including a new "Shadow Frenzy" mode to do some real damage to your foe if properly utilised.

Speaking of the roster, frustratingly European buyers haven't been able to partake in the free DLC available to North American purchasers, so if you want to play as Marie or Adachi then be prepared to plump up some cash to do so - that aside, all of the characters you'd expect to see in the game put in an appearance (aside from Margaret, another DLC addition), many of them in both normal and Shadow forms, together with original new character Sho Minazuki and additions from the regular cast such as Rise.

As you can probably surmise, the visual novel-style story contained within Ultimax revolves prominently around this new character - set just hours after the end of the story provided by the first game, it reconvenes the P-1 Climax fighting tournament of the first game but with a new, even more deadly final goal in mind that threatens far more than just Yasoinaba alone. Thus, the casts of Persona 3 and 4 are again reunited, and find themselves having to take on approximations of their friends in Shadow form via the game's beautifully rendered 2D gameplay to thwart the nefarious scheme in motion before it's too late.

As stories go, Ultimax's tale is pretty run-of-the-mill, and serves more as an opportunity to spend some time with the cast again rather than enjoy a compelling tale from the Persona universe. In these terms it works reasonably well, maintaining the visual novel format of the first game and continuing to intersperse it with fights here and there just to ensure that you don't nod off. Complete the entirety of the story with the Persona 4 cast and you'll get to play an alternate version of the same scenario with the Persona 3 cast instead, ensuring that there's plenty of content (with the original Persona 4 Arena story available as DLC to boot) even if it isn't the most exciting thing you'll ever have indulged in.

Perhaps as an acknowledgement that its story won't blow you away, there are a number of other modes to partake in and enjoy provided by the game - of course, there are arcade and versus modes to get you quickly and easily into a brawl against the CPU or another player, but also included is a self-explanatory Score Attack mode that sets you against "waves" of ever-more difficult opponents to see how far you can progress, and perhaps notably a new "Golden Arena" mode.

This particular mode is of interest as it bolts on some of Persona's more traditional RPG mechanics to its fighting game core, setting you up with "dungeons" of various difficulties and set numbers of fights to progress through. Pick your character and you can then traverse these dungeons by way of one-on-one fights - emerge victorious and you'll gain XP which you can use to level up your character's abilities, with levels and victory in boss fights also unlocking additional abilities which you can use during bouts. With a health bar that doesn't reset between rounds, the challenge is to proceed as far as you can without defeat, with your progress through the various floors and abilities unlocked saved for each character so you can pick up from where you left off at any time. Although this mode really only adds some sheen over the top of the game, it is sufficient to serve as a driver to keep playing once the story mode is exhausted - Golden Arena was where we found ourselves having the most fun with the game as a whole, marking it out as a welcome addition that serves the game well even if it could potentially have been fleshed out a little further still.

Needless to say, online multiplayer is also supported, with ranked matches, rooms and lobbies, the latter of which employs some rather cool-looking rooms based around locations within the Persona universe. Unfortunately from our time with the game, it seems as if the multiplayer element of the game is somewhere between "quiet" and "entirely dead", making it hard to find match-ups, while those still playing the game will cream all but similarly experienced players. Your mileage may vary, but we really struggled to get anything meaningful going in the online space.

Much like its predecessor, Persona 4 Arena Ultimax is an excellent game mechanically - a rare beast of a fighting game that is genuinely fun to both masters of the genre and button mashers alike, and the tweaks and additions to this second game provide more variety, complexity and enjoyment to players on both sides of that spectrum. Alongside this, the addition of the new Golden Arena mode does add some longevity to the game where it was arguably lacking from the original. On the other hand, Ultimax's story feels a little arbitrary and is a little disappointing overall, while the locking of a couple of popular characters behind a DLC paywall feels a bit gross and the game's online multiplayer already seems pretty stagnant at this point in time.

This combination of positives and less exciting elements leaves Persona 4 Arena Ultimax in a slightly odd place - if you missed out on the first game then this is the better game to jump into technically speaking and the Golden Arena mode gives you plenty to play with, but by the same token if you're interested in the story content available here then Persona 4 Arena has more to offer (and is recommended given Ultimax's nature as a direct follow-on in narrative terms). Overall, it's an enjoyable game whether your primary interest is fighting games or the characters of recent Persona RPGs, but one that never quite makes the leap from "good" to "great" that it arguably has the potential to achieve.

7
It's a strong fighting game with enough on show to attract both players of the first game and newcomers, even if its story is a little weak.
LATEST REVIEWS