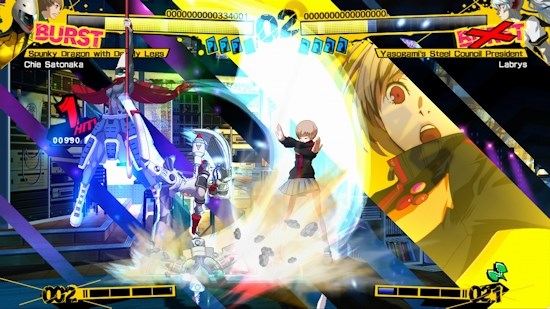 Persona 4 Arena is one of those launches that send fans into a real frenzy. We know it's a good - scratch that, great - game, if only because it's by Arc System Works. It's based on a massively popular franchise with hordes of devoted fans, but the game has been kept just out of reach by region locking (the first game to do so on the current gen PS3) - just like the fate of Tantalus in the Greek myth, what we want is right in front of us, but completely out of bounds.

Well, no longer. Persona 4 Arena has, at long last, arrived on UK shores, and if there aren't parades in the streets, there bloody well ought to be. The wait has been made much worse for me personally since I've played the game in Japanese arcades, and found myself spellbound by the wonderfully fluid and vibrant presentation that's a hallmark of ArcSystem Works, only here it's lavished on a set of characters I've heavily invested in. Everything from the rowdy fight introductions to the in-game commentary from Rise captures the feel of P4 perfectly.

The game showboats much of the technical wizardry that makes Blazblue such an effective fighter - it's all about chaining your attacks, using weaker, faster moves to work through to meatier and more damaging attacks while your opponent is still reeling. The dash mechanic throws some serious pace into proceedings, and the inclusion of your Persona, a holdover from the RPG which aids you in your fight, adds another layer of strategy into an already tactical arena. Unlike Arcana Heart, another Zen release, you can't mix and match Persona's, but the mechanics are so tight in this game that introducing that ability would only serve to unbalance the game.

These days, most fighters are all about online play, but the story mode in P4A is a thing of beauty that puts other brawlers to shame. Story mode is effectively a visual novel with a few fights thrown in, which may sound off-putting; don't be deceived though, this is a story you'll want to sit through, and enriches already established characters in fun and novel ways.

Plays well with others

Despite such care and attention to single player needs, the real hardcore want to brawl online, and thankfully our tests show that the netcode is very stable (though intros can wobble a bit, oddly enough) and that there are still plenty of fighters to challenge, even after such a long delay.

The character roster is varied, though it may seem light to those who have been brought up playing Capcom fighters. What Arc does best is to create intrinsically balanced rosters, and P4A is no different. Every character nuance can make or break a match, and getting to know your fighter of choice is a highly intimate affair.

Those who pre-ordered their copy with GAME will find themselves the recipients of one of the coolest bits of merchandise I've seen in a long while, the P4A yellow vinyl LP. Featuring Rise on both the outer and inner sleeve, it's a lovely piece of Persona memorabilia  completely exclusive to the UK market. There have been complaints from some quarters that it's not special enough, but to say that it's free and, frankly, awesome, it just shows that some people will never be happy. For the rest of us, it's a kitsch, cool treasure perfectly in keeping with the style of the series. Kudos, Zen.

In closing then, Persona 4 Arena is a bombastic, beautifully rendered beast of a beat-em-up. It oozes style in a way few others can muster, it enriches the license and gives players instant accessibility to the characters that we've come to know and love. An amazing mash up of RPG and fighter? To loosely paraphrase a cheesy celluloid classic; Is this madness? No, this is Persona.

10
A fighter with brains and brawn, this is a beautiful freak of a game that could only have come from Japan.