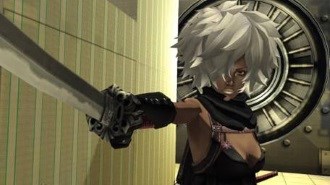 A sequel to a game should do one main thing: it should keep everything that was good in the original whilst improving what was bad. This simple rule of thumb gives us great sequels like Portal 2 and it’s spectacularly fun game play and laugh-out-loud comedy and failing to follow it brings bad ones like Breath of the Wild which decided that what Zelda fans actually wanted was to play a Dark Souls clone. So then, when crafting a sequel to the cult hit No More Heroes which way did Suda 51 decide to take things? Well, as you might expect from the looney genius, he decided to try find a third way…

Picking up after the ending of the original game was always going to be tough given that the whole gag was that they couldn’t think of a good way to end it, so the sequel picks up a few years later. Travis has gone totally off the radar and given up the life of the assassin until he finds himself dragged back into the rankings after the new number 1 has one of his friends murdered. So with payback firmly in mind Travis sets out to carve his way up from 51st place all the way to the top once more!

There were, if you recall our previous review, a number of issues with No More Heroes and you’ll be glad to know that Desperate Struggle fixes pretty much all of them though, as it turns out Suda 51 is a bit of a tease who likes to give you what you want whilst also tormenting you a bit. For example, we noted that we’d like some more variety in the basic enemy design and in the locations you fight them in. Well now there are a handful of new enemy types and every stage is different, full of wide, open areas. But you still need to kill every enemy to exit the stage and the game has a nasty habit of spawning in enemies behind you so you have to run back through the level to find the one you’ve missed.

We complained about the huge, lifeless, dull city and the slog to travel around it so the sequel removes it entirely and simply gives you a menu to instantly swap between areas but rather than use this saving of memory to add in new locations and activities there are actually less places to go to than in the original game barring the main mission areas.

The hateful grinding of cash is gone – the combat missions have vanished entirely and the side-jobs have been swapped out for a series of pretty fun 8-bit style mini-games all reminiscent of various classic games….but there’s very little reason to play them now as there's not much to buy with the money unless you must have every piece of the fairly same-y outfit choices.

On the other end of the spectrum we raved about the boss battles that were the meat and potatoes of the original but here, whilst we get teased with the prospect of 51 bosses in actuality there are only a few more than in the original game and many of them lack that incredible flair in design and gameplay that made them so good to begin with, plus they seem to somehow have even less backstory than they did before.

It’s all very frustrating as one one hand you’re being given everything you wanted but on the other it feels like these new concepts and changes haven’t quite been thought out as much as they should have been. Even the story falls a bit flat as whilst the world around him is as fun and mad as ever the game decides to take Travis’s character and turn him into the Punisher. He’s so deadly serious for most of the game and that’s just not much fun. When you can say that about a character with a new power to turn into a tiger that’s saying something!

All-in-all, this makes it very annoying to assess No More Heroes 2. It somehow manages to give us everything we asked for and yet still doesn’t seem to make it to full-on greatness. As with the remake of the first game there is still a lot to like here and the low price point and fairly short playtime are great at making this something you could pick up and play without too many regrets. Honestly though we aren’t sure if this is a case of missed opportunity or a case of a Suda 51-shaped mother figure telling us we have to pick which toys we want to play with because she won’t let us have them all out at once…

6
Everything you wanted but not what you asked for.