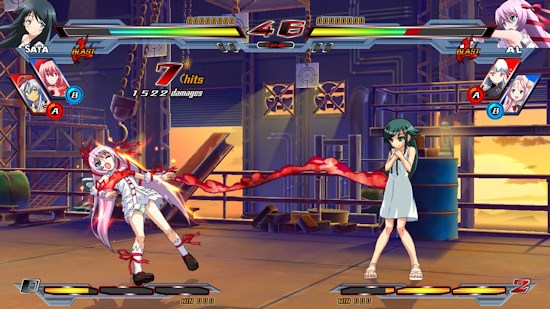 I'm a big fan of anime-inspired 2D brawlers. From my first exposure to Ranma 1/2 on the SNES, I've always loved the anime style in this format, it's such a natural fit. And in the last year we've had a bit of an explosion in bringing visual novel chatracters to the fighting arena - Auqapazza bought the Aquaplus characters and Dengeki Bunko Fighting Climax bought us a plethora of Dengeki characters. Now Nitroplus is bringing us their characters in for a brawl - is the format getting stale or is this another winner?

Fighting games such as this depend on two things - brand recognition and solid gameplay. The first is an issue, as Nitroplus is decidedly niche. Some characters may be recognisable, such as Saya from Saya no Uta (Song of Saya, a decidedly horrific game), Saber from the Fate series and even Super Sonico, but the rest are harder to get. There are 32 characters in the game, with 14 being playable and the rest relegated to support.

Support characters are important - attacks vary from immediate to charged, and the direction of the attack can vary. Therefore a bit of strategy in picking a range of support attacks is key to victory, and you really do have to play as a team to win.

The playable characters are delightfully varied. For example, Sonico is too busy wrestling with unruly cats to notice her friends run in and do the fighting for her, while characters like Saber, Mora and Homura are full-on tanks. In truth every character deserves a spin, and while some are harder to master than others, every one is fun to play. Balance has been achieved to an excellent degree here and we've had a good many games with victories going back and forth between us.

Whether you know who you're playing or not, what is striking is how pretty the characters in this game are. They're exclusively female, heightening the fanservice somewhat. Animation is smooth, and the super special moves are accompanied by some nice cut-scenes, and whether they're large-scale animation or just something nuts with the character model, they're all equally loud and impressive.

Oddly, as nice as the graphics are, the backgrounds are eerily static, as if they're an afterthought. They're mostly pretty dull affairs too, with standard locations like shrine gardens, factories, villas etc - competent but dull, and given how animated games like Guilty Gear and Blazblue are in their backgrounds, it really does make a game like Nitroplus look a bit fan-made - which is understandable when you realise this is a follow-up to a doujin game!

Controls are fairly standard for this type of game, and happily the super moves remain the same whichever character you're playing. This is something I've always approved of as I'd rather spend my games firing off attacks rather than trying to remember them. There's more variety in controls between each character than Dengeki, but it''s not overwhelming by any stretch.

Training mode is excellent, and there are plenty of unlockables to root around for. DLC characters Aino Heart (Arcana Heart) and Homura (Senran Kagura) are free for a limited time, but can be paid for later. Costume changes for the two DLC characters and Sonico are available (swimsuits, naturally!) while the rest have 2 palette shades to choose from, blue and orange.

Overall I'd rate Nitroplus Blasterz highly. It's a great game with a solid roster, excellent balance and just enough variety to keep tournaments interesting. Best played with friends and pizza, this is one for the deep-cut anime purists and beat-em-up fiends alike!

We'd like to thank Rice Digital for the review copy.

8
Smooth and deep, this is a deceptively involved fighting game featuring some adorably off-the-wall characters and moves. It's certainly something new in a crowded genre!