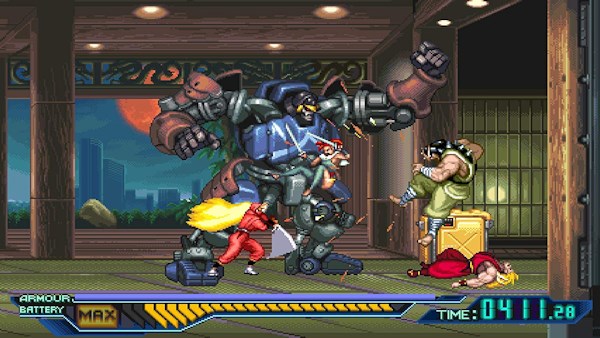 Ah, beat-em-ups! The home of the chunky arcade sprite, gorgeous pastels and murderous ninjas. It doesn't get much better than this...

Ninja Saviours first hit arcades as early as 1987, where it was chucked onto Darius cabs with their three-monitor/two-mirror setups to make the screen look super wide. Cyborg ninjas were thrown into the mix taking on human and robotic enemies across a series of gorgeous backgrounds. The game recieved a new lease of life on the SNES (where I discovered it) with The Ninja Warriors Again.

And now, in 2019, it hits another Nintendo console - the rather marvellous Nintendo Switch. The game just drips quality from the opening titles, recreating the SNES intro (upgraded of course) before the game proper begins. Initially you can select one of 3 cyborg ninjas to crack some skulls;

Ninja - Like The Rock but with nunchuks. He's basically all cyber-beef.

Kunoichi - Lithe, quick and rocking a sword, she'll need to get more hits in to get the job done, but she has oodles of style.

Kamaitachi - has blades in his elbows (like the Guyver!) and boasts some excellent projectile attacks.

Two other characters can be added to the roster, but lets not spoil things.

The game itself operates on a single plane, so none of the baddies can float around you - if it's on the screen, you'll hit it. The graphics are absolutely stunning and are updated while retaining all the charm of the original. You have the option of using fallen soldiers as projectiles, lots to smash in the background and new enemy types are fed in often enough to prevent gameplay from becoming stale.

Once you have enough experience, you'll find yourself starting to be proactive instead of reactive, lining up enemies for the kill, pulling off slick combos with the sort of sharp moves only an angry Michael Jackson could hope to emulate.

The music drives you on too, opting to keep original tracks as well as drop in some original scores, showcasing the fun the developers had with this game - unlike many other remakes from the era, it does a lot more than just polish up old assets and release them to market.

Indeed, the game's extra characters, brand new for this release, add some longevity as you learn entirely new movesets. On top of this, they've added a two player mode! Beat-em-ups are always more fun with multiple players, and the game just goes insane with two ninjas. It's still fun with one, but the option to share the carnage is the icing on the cake here.

Natsume Atari have done wonderful work here, preserving what you thought you remembered and bringing it to life in the modern era - the SNES version is still in 4:3 and has all the limitations of its time, but with the Switch and PS4 versions slipping in some modern conveniences, this is nostalgia done right.

10
A hard-hitting lesson in how to bring back a stone-cold classic to the modern era. Come get some!