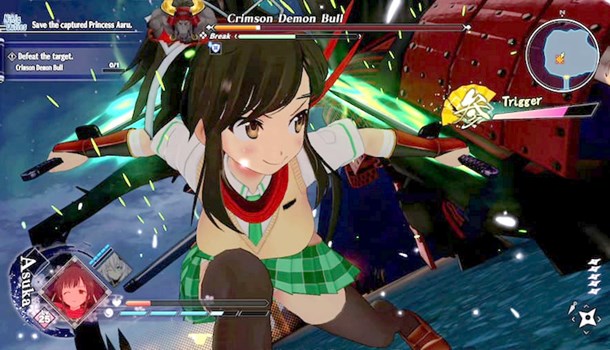 I've been a fan of Neptunia's character designs and fictional world since the first game, Hyperdimension Neptunia since it's reveal way back in 2010. The anime meets Tron vibe was an instant hit, and I even own a Purple Heart figure, such is the allure of the art style. The games themselves, released frequently by NIS, have varied in quality and even style, from action RPG's to more traditional (and less successful) fare such as Neptunia RPG. There's been hack and slash games, card games, zombies and even a bullet hell shoorer in 2019 exclusive to PC called, obviously enough, Neptunia Shooter. The series has also crossed over before, with Sega Hard Girls back in 2015.

Safe to say, the franchise is a bit of a juggernaut.

Likewise, Senran Kagura, the ninja-girl themed series, started life as a side-scrolling action game a year after Neptunia's debut that has seen offshoots that include sexy pinball, a water-park themed shooter (one of my personal favourites) and mobile games. It's a franchise that also sees plenty of crossovers, with examples including Dead or Alive, Nitroplus Blasterz and Valkyrie drive - it's even crossed water-pistols with Neptunia before!

So, history lesson aside, it seems that this game was as inevitable as DLC costumes, and while Senran Kagura's characters retain their traditional designs, the Neptunia gals have taken on a ninja style upgrade for all of their core outfits. This alone is enough to have fans eyeing up the special edition for some lovely new artwork, but whether the game in the box is as alluring as the potential merchandise? Well that's a more complex discussion.

In terms of the story, the world (aptly now called GamNinjustry instead of the more familiar Gamindustri - clever...) is presented as a Shuriken-shaped island hosting various ninja clans, with the two central franchises each controlling a portion of land and enduring a (seemingly very friendly) rivalry. The arrival of a new faction of mech ninjas, controlled by the aggressive and very busty "Yoh Gamer" sets the girls onto a path of reluctant collaboration if they're to survive this impending invasion.

The story is moved along by the usual character art and text boxes, which would be a chore to scroll through were it not for the often amusing dialogue, replete with puns, jokes and sly references. All the Neptunia characters are well aware that they're playing parts in a game, which is a nice juxtaposition to the more earnest (but still playful) Senran Kagura cast. There are references to tropes, DMCA strikes, critiques of the plot and so forth. It really lends a lot of flavour to the game, and will be appreciated by those who spend a lot of time online.

Once the action starts, you're dropped into an arena with a number of foes to defeat. The mechanics are broadly similar to other Neptunia games, but even for newcomers the controls are a doddle. You can lock on, use ranged or close-quarter attacks, both of which will build a gauge to a flashier attack (you have numerous selectable specials at your disposal). The simplicity doesn't allow for much depth however, and this isn't helped by the fact that most of the characters play without much variation either. It really doesn't matter who you're playing as, because it doesn't really make much difference - to that end, pick your favourite waifu and have at it.

The cast isn't as extensive as I had expected with only 10 playable characters, though I expect there may be incoming DLC for the game. Given the way most of the franchise is rolled out (on both sides) I expect to see characters and outfits offered down the line to enhance the experience. While the menu may be initially limited, what does strike home is how good what we get looks - the outfits, particularly on the Neptunia side, are device, and the game rendering is crisp and well animated. In short, neither franchise has ever looked this good, and I certainly appreciated the extra level of gloss the game has on the Switch OLED.

So it's funny, accessible and looks beautiful. Gameplay is kept interesting despite some repetition thanks to the sharp script and sly humour, so the only real downside is the length of the game. It's short at around 7 hours of gameplay, and for a game of this cost, that's quite the big ask from NIS on this one. With the special edition long sold out before the game even landed, £50 for this amount of content seems overpriced for what's here. It's not a question of quality, but rather quantity that's going to potentially hold people back from picking this up, so if you missed out on the special edition, I'd bide your time and wait for a sale.