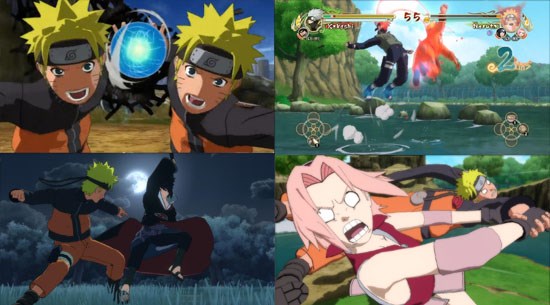 Naruto games are a dime a dozen these days - our favourite ninja has done everything from RPGs to fighting games and with the anime or manga showing no signs of slowing down, the games are just going to keep on coming. So, here is the latest offering from the Naruto stable, and as part of the Ultimate Ninja series this version plans to pack so much into it you’ll be wondering what there is actually left to attempt.

As the title suggests, the game is set in the Shippuden area of the series, picking up where Shippuden starts and concluding with the Invasion of Pain arc. If you are only following Naruto with the UK DVDs then this game has some major spoilers. You have been warned.

Now, on to the actual game itself. Much like the previous Ultimate Ninja Storm, this version is a hybrid of an RPG and fighting game. The main character combat is set out much like a fighting game, so if you have played any of the recent Dragon Ball games then you will know where this is coming from. Rather than side-by-side fighting a la Street Fighter, this has the player's camera fixed behind a character. Having the player located behind the character actually helps as the super-fast moves and bouncing around the screen are easier to pull off as you can keep track of your opponent much better, although it does make the game feel a little different to how you would usually play a fighter.

An addition to the fighting is a number of quick time events. These only usually appear during the main plot points or major boss fights. Here you are presented with the action going at full pelt while being asked to press whichever button appears on-screen. The action that takes place looks as though it has been plucked right from the series itself; it’s just a shame that you are so focused on waiting for the next button press that you can’t take a lot of it in.

As mentioned, the game follows the plot of quite a healthy chunk of the Shippuden storyline that has already occurred in the anime. This is found in the Ultimate Adventure mode where you will more than likely be spending most of your time in the game. One trait this mode takes from the average RPG is that it takes bloody ages to get going. There are plenty of fetch quests and constant running back and forth which take up the first half an hour. After about two and a half hours you will come to the end of the first chapter and thankfully things start to progress.

Other RPG elements come in the form of upgrading equipment, improving relationships with other characters and crafting your own items that then can be bought at the stores. However, the game only throws you some help screens every so often on how to achieve this and then leaves it at that. While that isn’t so much of a problem with the RPG sections, it does present an issue with the fighting aspects of the game.

While you are told what the controls are, you are rarely given a chance during the main story to experiment with the moves and are pretty much thrown into the deep end. The controls are not overly complex, but once the computer controlled characters start pulling off moves you haven’t discovered yet it can be a bit annoying. Obviously that is where the Free Battle mode can come in for a practice round, but if you want to play through the story first it is annoying.

One area the game does come up trumps though is in terms of its presentation. This is easy the best looking Naruto game I have ever seen, especially in the fighting sections as you could swear they have been torn from the anime series itself. Hell, even the flashback sequences use footage from the original anime just to add to the game's polish a bit more. The quick time events, when you can watch them, look fantastic and really add something to the fights that are taking place. The character models do seem a lot simpler in the adventure sections, but there are few close-up shots to spoil the view. The adventure mode also makes use of the 2D background art for a lot of sections, which at the start seems out of place, but once you start exploring other areas it actually fits in great with the rest of the environments and adds the extra level of detail that you would expect from this type of game.

There are other modes to explore, such as Free Battle as mentioned before and online fights. These modes strip the game back to the fighting sections and allow you to practice or take on a friend locally, or take your ninja skills online. One issue with the online game is that there was a fair amount of lag experienced during play. As with most online games, it does depend on who you play and how far away they are, but with our test version on Xbox Live it was quite noticeable. Though to be honest you will spend most of your time in the Ultimate Adventure mode, only giving these modes a look in for some practice or as something to do after the main game is finished.

While there are a couple of blemishes on this newest Ultimate Ninja game, this is easily the best Naruto game that has been out for a while. The graphics really make you think you are a part of the action from the series and while the controls take a bit of time to learn, they do at least make you feel as though you are in full control of your character. Once that initial hump is gotten over and you don’t feel like the computer is being merciless with some of the fights, it is easily one of the best anime fighting games on the market.

8
Easily the best Naruto game of the lot with fantastic graphics and a fight system that fits the license.
LATEST REVIEWS