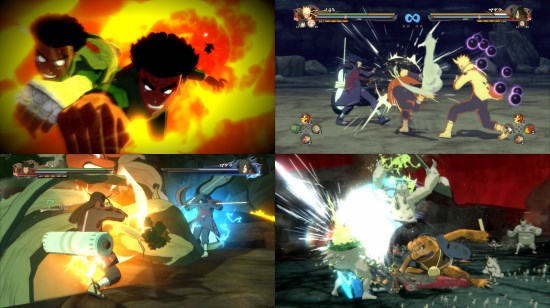 Recent years have seen Japanese studio CyberConnect2 grow into one of the go-to places to look for video games that take anime properties and go to great lengths to mimic the exact look and feel of those series in a playable form. Alongside its successful take on JoJo's Bizarre Adventure as a fighting game, the studio is perhaps best known for their recreations of the Naruto universe across a number of titles, foremost amongst them the Ultimate Ninja Storm series.

Now, with Naruto's story at an end (at least in manga form, some to some extend in anime form thanks to The Last: Naruto the Movie) and a whole new generation of ninjas waiting in the wings to take their place, we come to what may well be the last Naruto Shippuden: Ultimate Ninja Storm 4. In short, if you're still watching the anime chronologically and don't want to be spoiled on things, then you may want to wait a while before sinking any time into this game.

Ultimate Ninja Storm 4 also sees the series make the leap to the current generation of consoles (as well as the now ubiquitous PC, of course) - arguably not a moment too soon either, given the over-the-top and bombastic nature to much of what the conclusion to Naruto's story brings, which certain requires full use of the horsepower of these consoles to chew through all of the scenery being chewed up.

The game ostensibly boils down into a handful of modes - a story mode which allows you to follow through a chunk of the Naruto Shippuden timeline to its grand finale, stepping into the shoes of major characters involved in those machinations along the way; an "adventure" mode set after the events of the story and offering up an opportunity to explore Naruto's world and tell some tales along the way; and ad-hoc modes for single-player and online fights, allowing you to pit your favourite character against other players or the computer in various fashions to suit your whims.

It's the story mode that is the obvious focus of the game, providing you with a timeline mostly focused around Naruto and Sasuke's journey through the latter stages of Naruto Shippuden's story via a path that merges and diverges between the two characters as necessary, and occasionally spawning side stories to pull in other major events outside of their experiences. Each spot on that timeline is a blend of cut scenes using still frames from the anime itself (backed up by English or Japanese dialogue with subtitles), in-game cut scenes that are occasionally sprinkled with numerous quicktime events... sorry, "Interactive Actions" as the game insists on calling them, and of course battles against the relevant antagonist (or antagonists) for the aspect of the story in question.

It's these battles which occupy the mainstay of the game, effectively carving out an arena within which you can move at will while you punch, kick, throw projectiles, power up your chakra and unleash special abilities upon your opponent. These fights - especially later in the game - often take place at a frenetic speed, making for a satisfying blur of attacks, dodges and feints interspersed by periods of relative calm as you hold down the relevant button to stand around glowing blue and shouting while you charge your abilities. It all controls well, and leaves few opportunities to blame anyone but yourself for failing to pull off a move.

Once your abilities are fully charged (or if you land a sufficiently satisfying volley of blows on your opponent), the opportunity is ripe to take in the truly ridiculous wonder of the game as you unleash one of your characters ninjitsu on your rival. Depending on the ability in question, you may be treated to a brief but impressive moment of utter destructive force, but fire off your most powerful abilities and you can sit back for a good thirty seconds as a cut scene kicks in to allow you to admire the full extent of the destruction you've just unleashed. The first time you see many of these moves, you'll probably be left giggling with glee at how a few button presses has not just blown away a huge chunk of the enemy's health but also pretty much an entire forest or so in the process, and it really can't be overstated how satisfying it feels to pull off such a feat.

Of course, the problem over the course of the story mode is that these moments occur a lot, and by the end of it you may be stifling a yawn as you bury another hapless opponent under a hail of supernatural fire - it turns out even boasting incredible destructive powers can get a little tiresome at some point. This is perhaps the biggest enemy of the game's story mode - progression is relatively easy, and the game is plenty happy to assist you with extra attacking or defensive power and a restart with your opponent's health bar as it was while yours is fully replenished when you die, and from our play-through of the story mode only the final couple of characters offered us any real challenge. If you're looking for longevity from the story mode alone, the assumption is that it'll come not from beating this mode but by perfecting your ability to do so - every fight is ranked, so striving for a full board of S-rankings and all of the unlocks which come with it may be enough to offer replay value to completests.

In fairness, the story mode also tries to mix up the gameplay it offers too - aside from those Interactive Actions we mentioned, the game also features moments that change things up by having you flying through the skies after an enemy firing projectiles at them, similarly escaping a marauding enemy firing at you, and so on. None of these deviations from the core gameplay mechanics are particularly terrific, but they're brief enough and handled sufficiently well to serve as palate cleansers. Likewise, flashback moments within fights on occasion that switch you back to a less powerful version of your character also make for a fun variation on a theme and keep you on your toes.

As a whole, the story mode is highly enjoyable - taking overall longevity out of the equation its length feels just about right, and although you could make an argument for ramping up its difficulty level the quality of the presentation and the delivery of the bullet points of Naruto's story win out, especially if you treat the game as one that is simple to play but tough to truly master rather than shrugging it off as easy.

Even if the story mode doesn't hold you for as long as you might like, the game's adventure mode makes up for this with more of an RPG-lite system - travel around the world of Naruto undertaking quests both big and small, and using the money you earn to buy items that you can use in battles. In this mode there's no escaping defeat - lose a fight and you'll have to try again from the start of that battle with no "gimmes", making for a more challenging environment if the story mode seemed too trivial. Admittedly, it's main questline seems more preoccupied with reliving the "greatest hits" of Naruto as a series than really bringing anything truly new to the table, but that isn't necessarily such a bad thing either. Provided you enjoy the core mechanics of the game and its characters, there should be some good times to be found with this game mode too.

Finally, we have the game's various ad-hoc battle modes, allowing you to create tournaments or one-off fights with individuals or teams from a fully-fledged roster which slowly but surely unlocks more characters as you progress through the main game modes, offering a decent selection of fighters with a good variety of abilities and play styles. If you're playing online, those main modes (and the currency earned from them) also unlock other goodies to allow you to personalise your online persona in various ways, ensuring that you'll really want to spend some time with the story even if your primary focus is showing off your ninja skills against others.

As we alluded to earlier, visually Ultimate Ninja Storm 4 looks terrific - it captures the characters of its world well and looks and feels the part both while playing the game and during rendered cut scenes, and the actual depiction of the various ninjitsu used by the cast is stupendous. We should note that during some of the more outlandish attacks we did see some significant drops in framerate - thankfully the rest of the game ran smoothly on our PlayStation 4 copy of the game, and as these attacks play out without any required input from the player it wasn't hugely detrimental to our overall experience. As befitting its move to current consoles, this is the best looking Naruto game we've seen, and it adds a lot to its overblown, anime-style experience. With good voice performances on both the English and Japanese sides of the coin to boot, we really can't fault Ultimate Ninja Storm 4's presentation one iota.

That presentational layer, coupled with what feels like a more streamlined gameplay experience, combine to create what is arguably the best of the Ultimate Ninja Storm games that we've played in our book. At its best it's an absolute delight, filled with simple pleasures as you leverage the ridiculous powers that the franchise's cast boast, but dedicated players determined to master every aspect of the core mechanics will find a decent amount of depth beyond just charging up and mashing the ninjitsu buttons over and over. Admittedly, if you don't want to go to those lengths to get the most out of the game then it may feel a little too easy (in its story mode, at least), and some of its attempts to vary the gameplay are adequate rather than stunning, but regardless of that Ultimate Ninja Storm 4 is likely to be the best video game Naruto experience you'll find.

7
A new generation of consoles help to ensure this is a great-looking game that captures the bombast and scope of Naruto's world and characters, although its story mode could do with being a little more challenging.
LATEST REVIEWS
13 Sentinels: Aegis Rim (Switch)