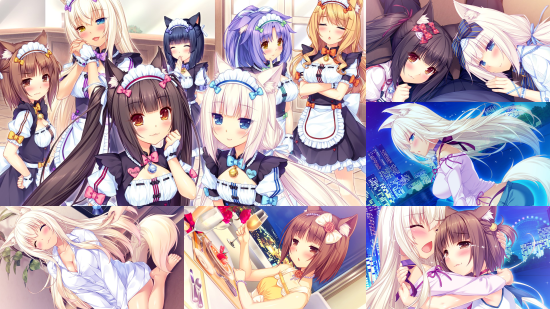 This month two, yes two, cat cafés open in my home city. Going into a café, being surrounded by loving cats while devouring tasty cakes is truly what I would call a Cat Paradise. The only way to improve such a place would be to turn those cats into catgirls, and this is why I have such a problem with NekoPara: it isn’t real. Sigh.

After the prologue and the first volume, I have found myself completely smitten with the six catgirls of the Minaduki family. I have my ranking of best girl to not-so-best-girl and I now have a nervous twitch every time Shiguri makes a comment regarding her over-affection for her brother. Yup, I am addicted to my Cat Paradise.

So what does this second volume of this visual novel series give us cat aficionados? Well, when the first volume gave us two flavours to whet our taste buds, volume two provides us with some delicious toppings for the pastry. Where Chocola and Vanilla provided wonderful variety with their cute and contrasting personalities, Coconut, the Mainecoon middle child of the family and Azuki the Munchkin eldest sister, provide, something completely different to the cat-panion harem.

It all starts innocently enough. When you have a family with six beautiful catgirls and a cosplaying sister, its only good business to offer a cat-eared service to those willing to consume your pastries... and boy, with that kind of offering, do you sell some pastries. Kashou and the rest of the Minaduki family cannot puff those pastries fast enough, but when Shiguri has to take Chocola and Vanilla to be tested for their bell, Kashou finds himself in a bit of a quandary. Coconut and Azuki have always fought - they are sisters and all that Azuki wants is to look after her beloved sister. Unfortunately, although these are her intentions, Azuki’s words tend to be a little on the harsh side. It doesn’t help that she is a tiny catgirl (in spite of being the elder of the two) trying to argue and protect the huge (and very young) Coconut. Eventually something is said, feelings are hurt, and both Coconut and Azuki find themselves in darker places. Not liking what has transpired, Kashou works hard to console them both and lead them to their happier places.

The routes taken with both Coconut and Azuki are actually beautifully done. Kashou works tirelessly to help Coconut improve her confidence and her co-ordination, and break her out of her self-deprecating shell that she has worked herself into. What emerges from this shell, thanks to some help from Chocola on the side, is a confident girl who is happy to work hard, is fine with being the tallest, and with this confidence comes a succulent sexiness that frankly makes Coconut the best girl in this series to date. It is her relationship with Azuki that makes the series.

Azuki, who is embarrassed to be seen in even an evening gown and afraid to be seen as an adult due to her size even though she runs the family and looks after her five sisters, has her own shell she must be broken out of. For Azuki, her issues stem from her own personality which stops her from being honest when she really wants to be; it takes her a long time to come to terms with her true feelings for her family and, as it turns out, for Kashou. However, when twinned with the mischievous and deadpan Vanilla, her honesty belies a masochistic side which no-one knew existed.

Two catpanions become four and Kashou officially becomes the luckiest man on the planet. While this is happening, the crazy cat-lady of a sister, Shiguri, loses yet more of her beloved catgirls to the lure of her brother’s genitalia, while getting none of that hot brotherly action for herself - because of this, she becomes just a little bit crazier. Seriously, Shiguri is a terrifying person.

Sekai Project and Nekoworks have done well to bring us a very well translated sequel, and I do mean well translated. As with the other two volumes, someone had some serious fun writing this dialogue. I have never read so many alliterative phrases to describe a perverted pattisier in my life, and bloody hell whoever writes the lines for Cinnamon, give that person a medal. If Cinnamon had been in volume two with Coconut, I would have truly died and gone to heaven, and I can only hope we get to see what the Scottish Fold can do in a future instalment.  As with the other volumes the game uses the Emote engine allowing for beautifully emotive and well-rendered characters, as well as the unique “bounciness” feature to accentuate the movement of the girls’ chests. This, combined with the petting feature, makes up for the linear nature of the narrative and the lack of narrative choice. I am more than happy with this, and NekoPara Volume 2 is easily on my top ten visual novel list because of this.

To finish properly, I have to admit that Coconut is the best girl. Sorry Chocola and Cinnamon, you have both been dethroned.

Of course, I am only reviewing the non-hentai content here, and having enjoyed the Steam-compatible adult content patch offered by Sekai Project through their Denpasoft storefront (very reasonably priced too) I was surprised by how much story was actually contained within the visual novel’s three 20 minute long sex scenes. Although I didn’t skip these effective adult scenes (and I assure you, they are effective), if the scenes are turned off then this dialogue is effectively skipped, forcing you to miss both some important revelations from Coconut, and Azuki’s confession to Kashou. This missing dialogue didn’t occur in the first volume, and I was surprised that such important lines were contained in the scenes in this volume.

My advice then: make sure you either purchase the non-Steam adult version, or get yourself the patch for the Steam version at your earliest opportunity. You won’t regret it. My only other comment regarding the adult content is that I wish Nekoworks would stop using silly putty during these scenes. It’s quite... off-putting.

8
NekoPara continues with its cute and well-written story.