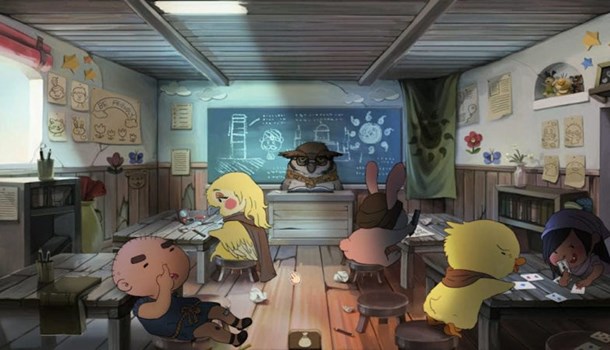 NAIRI: Tower of Shirin is a point and click adventure game that mixes in elements of a visual novel and puzzle game; then given a beautiful hand drawn art style to present a charming little package. The game's story follows Nairi; a young girl who suddenly has to flee her home after her home is attacked. Once she flees home she finds herself become part of a bandit group of cats, which finds herself go back to her home town and try to discover the secrets of her world.

NAIRI: Tower of Shirin presents its story in a visual novel style with characters on screen talking to each other in text boxes. Characters are animated ever so slightly with mouth flaps and transitions to them folding their arms or gesturing in various ways. Whilst there are mouth flaps there is no voice over work. While the lack of voice work and animations may be seen as a negative to many; the way NAIRI makes up for this is with it's solid and unique character designs expressed through beautiful hand drawn art. As mentioned earlier there are anthropomorphic cats as well as human characters in the game. Along with several other animals. This gives the game a real sense of whimsy and a unique style seeing a human girl interact with animals that talk like regular people. Tied into the art aspect is the gorgeous background art that really pops and makes the world feel more alive. It is clear to see that a lot of care and effort went into making these backgrounds look as visually interesting as they do.

Which brings on to the game play aspect of NAIRI. It is a point and click adventure game making use of puzzles. This is done by scanning the area for items to pick up and interact with. Holding items and then using them at the right time. Those who have played classic adventure games like Broken Sword or Monkey island will feel right at home here. Throughout each area there are clues to solve the puzzle usually involving hitting the right switch in an area or using the right item on something. As far as puzzle logic goes it keeps things rather simple and straightforward. The puzzles never get challenging to the point of frustration making this a rather mellow game to play.

Along with this the game has a very calming arrangement of music that fits the tone really well. Which will make players go at a leisurely pace. This is probably the best way to experience the game as it can be finished within about three to four hours or so. This rather mellow experience makes it the perfect thing to play to relax and unwind to. Its visually pleasing on the eyes, has mellow music with fun characters telling a rather interesting story. The game does what it needs to do with its story and feels like it doesn't overstay its welcome.

With regards to the game, we reviewed the switch version which is a really nice system to play this kind of game on. The developers used the system's features to their advantage to allow players to play it like a tablet game using the Switch's touch screen controls. A joy con with two button input making things simple with using the control stick. Even the joy cons motion controls are taken advantage of if you want to play using one joy con aiming at the screen to control the cursor.

From all this it shows that a lot of love and effort went into making NAIRI the game it is. It has beautiful art, a fun narrative and an overall great presentation to deliver a very charming game. A showcase for what you can achieve on the switch with point and click adventure game controls. A fun, short but sweet game that has a lot of charm.

8
A charming short but sweet point and click adventure game