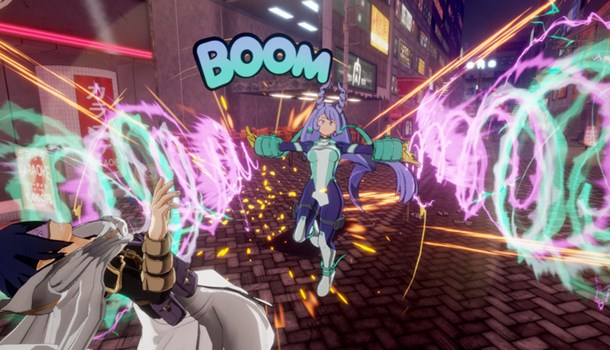 By now its safe to say that Bandai Namco has really gotten to grips with the arena fighting model, used previously on One Punch Man and the Jump Force games. The games have been well recieved by anime fans, so its no surprise therefore that they've stuck to a winning formula with the second entry in their My Hero One's Justice series.

The game has multiple modes, all by now familiar, including  a Story Mode (revisiting seasons 2-3 of the series), Network fighting, Training and Survival modes. An Arcade mode has been added since last time too, and in each you are thrown into a 3D arena, either alone or with backup partners, and forced to scrap for victory. This is made trickier in some modes by having to meet certain objectives as you fight.

If I seem curt with my summary, it's largely due to how many times this formula has been rolled out, and the need to explain it is pretty minimal. Don't mistake this shorthand as dismissive however - there's a reason that this model is being rehashed with a different skin - it works, and it works well. Whether it will ever be a match for 2D fighters though? Well...

Firstly, the license  lends itself very well to an arena fighting game - My Hero Academia has a roster of fantastic characters, nearly 30 in total (and more surely coming via DLC) all with various showstopping powers that provide variety and spectacle in equal measure. As an academy for gifted youngsters, it's no surprise the characters should be so lively, and once you add teachers into the mix with students, you have some excellent David vs Goliath style matches to work your way through.

The use of tag-teams (up to 2 partners) adds another element of strategy and fun to the game, in much the same way as more traditional 2D fighters such as Blazblue Cross Tag Battle.  The extra use of space does make the game "feel" more like an immersive version of the anime, but it lacks the nuance of more technical fighters. It really depends on your preferences as to what's more important to you as a player.

In Story mode, you'll work with different characters in each scenario, an excellent way to ensure the player becomes familiar with both the basic moves and the expanded roster. Added to this, a strong performance in matches will unlock goodies for the gallery, new music and new costumes, ensuring that not only do you have extra incentive to do well, but also that you'll return to completed matches to unlock further rewards. It's not a new idea by any means, but it all adds to the addictive nature of the game. If we are to nitpick, the story doesn't have the oomph delivered by the anime, with the narrative delivered in stills and requiring button presses (or selection of an auto-scroll feature) to move things along. Playing out the iconic Season 2 and 3 battles is fun, but due to the fact the game is perhaps a little too friendly, you can probably button mash your way through them.

The new Arcade mode is standard fare and a good way to fight your way through the roster. Mission mode can be a bit of a pig, as once you lose you have to go back to the mission start, but there is at least a challenge offered here which hardcore gamers will appreciate.

Overall presentation is absolutely stellar, with everything from the menu screens to the comic-book style GUI providing plenty of charm to suck you into the game. The Switch handles the large rendered characters and arenas admirably, with no noticeable performance issues. Everything looks rock solid, from the effects to the special moves.

In terms of improvements over the original, the additional 18 characters are the most obvious expansion, but move beyond that everything is just incrementally better - it's no revolution, but a nice layer of polish. For example, you can now use your assist characters Super Abilities in place of your own and the stamina system, which limits the use of wall running and certain moves, provides additional strategy to consider.

Online wasn't something I've been able to test, but the pandemic situation at time of writing should mean that you're able to find a match with few problems.

Hopefully by now  afew things are clear. If you enjoyed the original game, you'll find more of the same here, with tweaks to the gameplay to add depth and a host of new characters to play with. Everything is presented well and flows nicely, with good controls, exciting specials and interesting arenas. What it isn't is a technical fighting game, and compared to the recently reviewed Granblue Fantasy, it won't have you as eager to master the minor elements to gain a competitive advantage.  What the game will do is simulate the pace, powers and grandeur of the TV series, wrapped up in an attractive package that's easy to learn and fun to keep playing. It may be fighting-game lite, but I for one found it's charms far outweighed its shortcomings.

7
It's not a technical fighter, but it's accessible, fun and full of characters to get to grips with. Fans of the franchise will find much to enjoy here, for the rest this is a colourful and worthwhile arena fighter with plenty of panache.