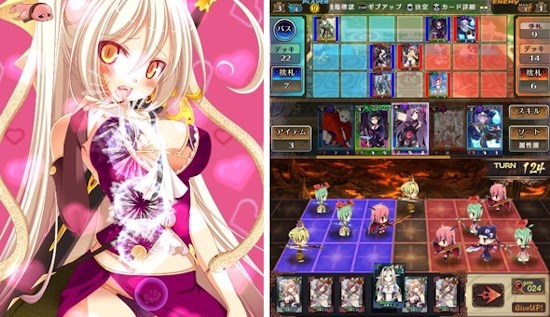 After reviewing Conception II on the Vita recently, it really does feel like there's a pattern emerging for Sony's beautiful handheld. It is, essentially, the perverts choice, and is fast giving another meaning to the term "handheld gaming".

So, Monster Monpiece, a grid-based strategy card game from the producers of Hyper Dimension Neptunia, starts off very strongly. It has a lovely opening, some endearing characters and some great visual novel style interaction between the characters.

The story goes that human beings, on the verge of extinction after countless wars, are all but wiped from the face of the Earth by the Gods, who create a plague of monsters to cleanse the world. However, seeing the joyful slaughter these monsters partake in causes a second judgement, this time fusing monsters with human females to create girl monsters. And that somehow brings in an age of peace.

Good Lord, who writes this stuff?

Believe it or not, the story makes a weird kind of sense in context, and our heroines, led by an inexperienced May and feisty monster girl Fei, are earnest and engaging enough to make it worth following. But the real meat of the game is in the battles.

You're given a set of cards to use on a battlefield that contains a 3x7 grid, with the end of each containing your "base". The idea is to defend your base by laying down cards one at a time and attacking your opponent. The power of the card you can call is controlled by your Mana, which starts at 3. Cards are split into:

Each card has hit and defence points, some have special abilities and all have a strategic value. While this may sound quite dry, it's actually terrific fun.

Initially your base will take a lot more hits than your opponent's, and there are no conditions placed on the battle. This changes over time, where you may be tasked with winning in a set number of moves, or within a time limit, but the rate in which difficulty is applied is gentle and creates an addictive quality. Matches rarely last more than a few minutes, but are infinitely more-ish and battles can swing wildly based on just a few moves. The tight grid also makes for some very tense moments, requiring quick-thinking.

Being a card game, you're also tasked with collecting cards. You can buy these in-game from the card shop, or spend real money on PSN and buy rare packs. On the US store, these are 99 cents and contain 3 cards (2 of which are usually bog-standard). You can also earn cards from battles, and initially you're presented with one special card, Neptune from Hyper Dimension Neptunia. I love the idea of cross-pollination of characters, and hopefully we'll see more of this either in-game or on PSN.

You can, of course, upgrade cards. And herein lies our controversy. I get the impression that Compile didn't really understand how good their game was. Either that, or the lure of touchscreen was just too much to resist, but the way in which you upgrade your cards is to rotate the Vita to portrait perspective, load the monster of your choice, and essentially touch her in just the right way to make her orgasm into a more powerful card.

So it comes down to this: Monster Monpiece is a great game. It really is. Whether or not you pick it up will therefore depend on 2 things:

1. Whether this dodgy "upgrade" system causes you any moral dilemmas

Honestly I can live with it. Do I feel like a dirty old man playing it? Only when I have to upgrade a card, which I'd never do in public! Do I wish they'd left this feature out? Absolutely. I really can't see the logic - any sales they gain through notoriety they'll lose the same way, and the game just doesn't need it.

8
A cracking strategy game with a questionable upgrade system. Great fun, just maybe not in public.