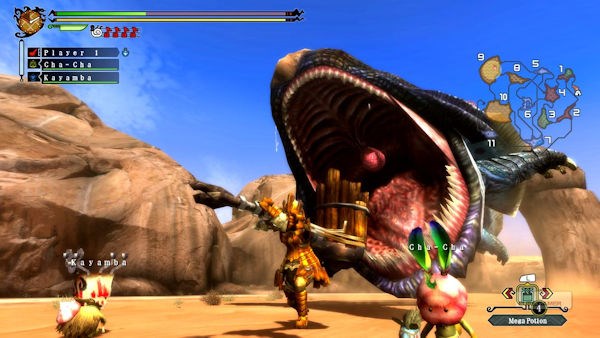 The Monster Hunter series was credited with saving the PSP in Japan and making the console a lead format in the country. Capcom has tried to replicate the success with the series here in the west, but has not seen the same kind of enthusiasm. So with the launch of Nintendo’s new console, the smart money was to release a new Monster Hunter for the console. But will this update to the Wii game be the ultimate version?

For those unaware, the Monster Hunter games are not your standard RPG fare. The main aim is to amass as much loot as possible by hunting monsters (if that wasn’t obvious) or mining for resources. With said resources you can then upgrade or buy weapons and armour, the only two factors that affect your performance throughout the game. There are no XP levels and your character doesn’t increase in health or stamina by killing monsters constantly. This simplifies the management process somewhat - simply keep upgrading to fight bigger and badder monsters.

Monster Hunter 3 Ultimate is an update of the original Monster Hunter Tri from the Wii, and the game takes elements from the Japan-only PSP version too. For those new to the series, this won’t be an issue, but for veterans of the soon-to-close Wii version you will be treading a lot of old ground. Granted you do get new content in the form of G rankings for harder quests and monsters to fight, as well as new weapons and armour, but to get this content you have to go through all the older content again, which may be a turn-off for many.

Being a Wii-U title, the game is now in HD, but it's very clear that this is an upscaled effort and as such suffers from blurry textures, with very small text making overall presentation look more than a little off.  On the 3DS these issues are not a problem, but on Wii U, the effects are disappointing and decidedly not next-gen.

For those new to the quest though, this is a fun and very addictive game, especially when you're missing that one item you need to create that much revered new armour/weapon. I did find with my play-through however that playing solo can quickly become a chore of repeating kills and hunting monsters which is no fun on your own. Thankfully with the Wii U version you can take the fight online and team up with players to tackle harder monsters. This is where the game really shines and if you have a regular hunting party to venture out with, this will be where you will be spending most of your time.

Unfortunately the same cannot be said of the 3DS version, which lacks any online multiplayer, restricting group activity to local gatherings only. There is a workaround to take the 3DS version online, but it requires someone to have the Wii U version and the USB to Ethernet adaptor for the Wii U. This way a local group of friends on 3DS can connect to the player with the Wii U version and then take everyone online. Considering the online capabilities of the 3DS, this seems like a bizarre and unnecessary workaround for what should be a simple function.

All credit to Nintendo, the game is also Nintendo’s first attempt at cross-platform and cross-save gameplay, in much the same vein as Sony between PS3 and Vita. While Sony have got it down to a fine art (Buy the PS3 version get the Vita version for free digitally and saves stored to the cloud through a menu option), you do see that Nintendo/Capcom have a way to go before providing the same service. You will need to purchase the game on both formats (which are time of writing are £40 and £35 on Wii U and 3DS respectively) and the save game transfer requires a separate tool on 3DS for both versions of the game to be linked  to transfer. Not exactly a smooth or cost-effective method for the consumer.

Since writing this review, an update has been released for the Wii U edition which allows for players to play the game on the GamePad rather than on the TV and opening up online servers to all regions. This means you can now play with players on Japanese and US servers rather than just exclusively Europe.

The real question is, should I buy Monster Hunter and which version? Monster Hunter is a fantastic looting RPG and if you team up with friends regularly then the fun just spirals on from there. Personally I would go with the Wii U version purely for the online element as this is where the fun is. If you are looking for something to sink time into, this could be for you.

For those coming back to Monster Hunter 3, there is less here to excite. The question for those fans is whether or not the extra content is worth the commitment. The Wii U/3DS cross-save compatibility is a fantastic extra, but with the additional cost incurred to make use of it and some bizarre choices regarding exchanging data, it may be more trouble than it's ultimately worth.