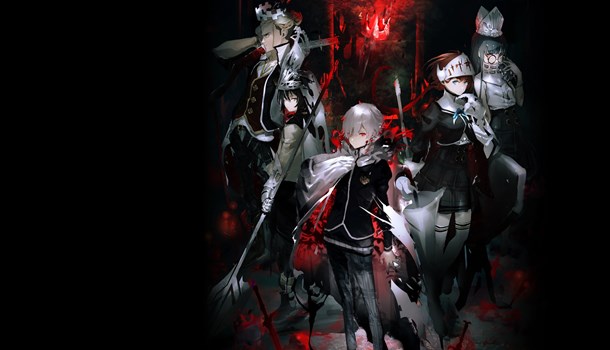 Set in Shinmikado Academy; Monark sees this school enveloped in a strange missed and enclosed in a barrier that prevents the students and faculty from escaping. This mist has an odd effect on those that are caught within, turning those into unsettled. Slowly succumbing to the madness that envelopes them. The player takes the role of the games protagonist who makes a pact with a demon known as a Monark to gain an authority that allows them to venture into the mist and the other world that is inhabited by demons. The mist is a by-product of other pact bearers authority. Which are all tied into the deadly sins. Thus begins the protagonist and his group of companions dubbed the “True Student Council” mission to break the ideals of each pact bearer in order to save the school.

This review while trying to remain spoiler free will touch upon some of the games themes and narrative points. Nothing will be stated explicitly but there may be things of mention. The first thing to mention in the game is it's overall structure. As stated in the synopsis that the game follows the True Student Council's efforts to defeat each pact bearer and restore a small bit of normality to the school. Each pact bearer takes up residence in each of the schools buildings leading to the game flow of going to each building in turn and teaming up with a new companion for the duration of that story section. Things follow a rather formulaic structure of turning up at a building meeting the characters involved in that story and exploring each floor before fighting a boss battle in the form of breaking one of three ideals. Having such a rigid structure makes the game feel rather focused. There is only these main missions to deal with, with no side quests involved.

The only things that can be considered as side quests are exploring each area to find clues to opening safes, answering psychological tests and finding alter egos. Probably the most interesting aspect of the game is its use of psychological tests in the form of multiple choice questions and ones that make up a choose your own adventure style story. The result of answering these questions not only gives you a bit of insight into your own personality but also acts to increase one of the seven ego aspects that are tied directly to the seven deadly sins. Answering in a certain way will give more points to one aspect and also lets you know what each of the answers means. One such example was your partner wears an animal onesie what animal is it. Depending on the answer relates to what kind of partner you prefer or how you see love. This aspect reminded of the game Catherine with its approach to making the player actually think about themselves before answering a question. The alter egos tie into this. Talking to each student leads the way to learning about them and also makes their alter ego appear on the map. This is an item that when collected will raise the stats of every character. In order to collect them a part of the player characters ego must be registered high enough. An example is when an alter ego needed at least 500 Lust ego to collect.

Also regarding stats and levels. The game does not have a traditional levelling system. Instead spirit points are earned via battle, collecting items and dismantling items. The spirit points are in a collective pot that is shared by all characters to learn and upgrade skills, and is also used as the currency to buy items. Every time a skill is learned or upgraded a level a characters level will increase. At first things progress rather quickly with each skill costing 50 to 200 points. However as the game progress and each skill is upgraded considerably more points are needed to upgrade. This results in quite a bit of grinding battles. Which Monark handles in an interesting way. There are no random battles in Monark. Save for when the player first enters an area and can be subject to a death call. This call can happen randomly and puts the player in a situation where they fight extremely over levelled enemies. Thankfully this can be averted as the player is given a phone number instead to call that results in a battle more level appropriate, the resulting triumph elevates the threat of the death call. In order to battle. The player must be near Vanitas, the demon who has granted the player the authority of Vanity. He is the link to the other world and provides the telephone numbers. Other numbers can be learned by solving puzzles dotted throughout the school. With no random battles in question and leading the player to take matters into their own hands with selecting battles; this causes quite the uneven experience where the player can go a while without any battles and then cram in a lot at once to grind in order to ensure they are levelled enough for the boss of that area. This also leads the way to some difficulty spikes as when entering a new area the player won't know how strong the battle is without dialling the number for the first time. Luckily the game is rather forgiving if they get a game over. Allowing the player to either retry the battle or wake up in the infirmary.

Another big aspect of the game is Madness. The game has a gauge for madness that constantly fills up in mist areas and also fills when certain attacks are made. When the Madness gauge reaches 100% the player will black out and wake up in the infirmary but in a battle the character will go into a beserked state where they cannot tell friend from foe and will attack with more power but less accuracy. There is another gauge in battle the awakened gauge, which fills when characters recover health or get stat boosts. Getting 100% on this gauge enters the player into the awakened state which allows them to use their skills without cost and also when unlocked can use their special attack. The game also has the enlightened state that happens when both gauges hit 100%. This state is more powered up version of the awakened state. Speaking of battles the game works on a turn based open plain with each turn having the player control each of the characters on the board by moving them and each attack have its own area of effect that can target an enemy or ally within. The game play is similar to that of a previous Furyu title – Lost Dimension with the presentation of the game being similar to Caligula Effect. At times battles feel overwhelming with the amount of attacks and effects to keep track of. It wasn't until a good few hours in where everything clicked and realising it was best to focus on strengthening existing attacks rather than wait for the SP to get new ones.

Speaking of, the game itself deals with some major dark and heavy themes. Being set in a high school with characters wanting their desires fulfilled there are several allusions to suicide, bullying, peer pressure and illness to name but a few. The game handles this with various degrees of subtlety. Some aspects are hidden in the students profiles where it will make the briefest of mentions about a students sexual orientation or gender identity whereas some themes are on full on display as they are part of the main story. Some of the aspects of the games story may hit a bit close to home for those who didn't have the most ideal of high school life. With regards to presentation; the menus are clean and stylised in a very minimalist but cool approach, the music is pleasant enough with the stand outs being the boss themes. However character models and enemy designs feel a bit lacking. The enemies are all recycled designs with a few different armour overlays on top and the backgrounds look rather basic. Its serviceable and fine but not something to blow the player away.

Having said that though. The main draw of the game is in its execution rather than style. Its got a solid game at its core with a concept that ties really well into the dark themes it wants to portray. The game also makes clever use of discussing the ego and the psychological test are a fun little aspect of the game that leads to some self reflection. The game while having a strong core. Feels like it just needs a bit of polish. With the game feeling a bit unbalanced in its approach to story and battles. The battle system also feels like it just needed a bit more refinement as well. While not quite at the level I was expecting. It is still a fun and interesting game regardless.

7
A rather interesting RPG that deals with the ego. Just needs a bit more polish and refinement