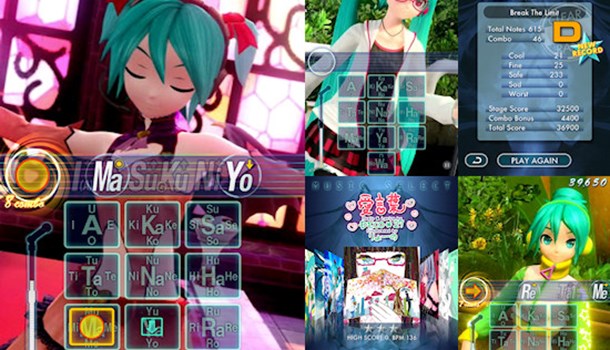 Having arguably crowned herself (and her Vocaloid friends) as the queen of the rhythm game on the PSP, Miku Hatsune goes is alone for her official iOS debut, the slightly dodgy-sounded (although that may just be my filthy mind talking) Miku Flick.

Of course, the move to an entirely touch-screen oriented platform means that the game mechanics which made the Project DIVA series of games so successful need to be entirely rethought, and thus Miku Flick is a completely different gaming experience to previous titles.  Rather than hitting "notes" in time with Miku's singing using buttons, things become rather more complex in Miku Flick as it requires you to select the correct syllable or character that everyone's favourite virtual diva is singing as she sings it, with the lyrics to the song scrolling along in time with her performance.  By default, both lyrics and the game's keypad are displayed in Japanese even in the English language version of the game, but thankfully there are partially and fully Romanised options to make playing the game a whole lot easier for those of us without an intimate knowledge of the Japanese character set.

It's here that the "flicking" element of the game kicks in - each key on the game's virtual keypad actually contains five different possible characters, meaning that you either need to press the given key to select its default character or "flick" the relevant key on the touchscreen up, down, left or right to pick the right character at the right moment.  Thankfully, things are further helped by the display of arrows over the keypad to shows you not only which key is coming up next (alongside markers within the scrolling lyrics) but also which way to flick it.

After the initial hurdle of getting used to this entirely new interface, the whole experience soon becomes very intuitive as you develop your own sense of how best to play the game. From a stuttering start, we were soon blazing through stages and manipulating our digits like a practised orchestra conductor - it's actually a rather satisfying control system once you get used to it for the most part, although it does still fall into the pitfalls of every touch screen game for iOS devices, namely not being able to see the screen completely when your own fingers are in the way and the propensity to either miss characters or flick them too early thanks to the lack of feedback present in normal, button-based controllers.

The biggest issue with Miku Flick comes from its pricing - at a cost of £9.99 in Apple's UK app store it's anything but cheap, which isn't a problem in itself until you realise that you only have a dozen tracks to play with within the game.  In fairness, each track has four levels of play assigned to it - easy, normal, hard, and "Break the Limit" - but you can play through all of the tracks on one level in around an hour if you're even vaguely proficient at the game, which isn't a lot of satisfaction to be had out of a tenner.  The game also links into Apple's Game Centre to provide some competition with the rest of the world as far as high scores are concerned, and there are numerous achievements for you to try and unlock, making the game far more tempting for obsessives who have to clear the game with the best rank on every track and at every level.  You can also simply watch and listen to each track without playing the game itself once they're cleared, which I suppose counts as a set of Vocaloid-flavoured additions to your mobile music collection - given that the tunes available in the game are pretty much a set of Miku's "greatest hits" this in itself is arguably worth some of that hefty outlay.

Graphically, the game looks gorgeous - as you might hope from an 800MB download the game looks crystal clear on the iPhone 4S we used for testing, with a beautifully rendered Ms Hatsune doing her thing in some decidedly adorable outfits across the game's variety of tunes.  The interface is also crystal clear and very responsive, from (all-importantly) playing the game itself through to the menus, which include an Apple-style CoverFlow song selection screen.  Our iPhone did get pretty toasty after playing the game for a long period of time, but never to the point of causing us any issues, although I'd also wager it will drain your battery rather fast if you're not plugged into the mains while playing.

When push comes to shove, I'd be lying if I didn't admit to loving Miku Flick - over the course of a couple of train journeys I cleared all of the game's tracks in easy, normal and hard modes (and showed off my prowess a little in the insane, finger-destroying Break the Limit mode) while enjoying every second of it, even finding myself yearning to nab more achievements even though such things never normally interest me.  If the game was priced at around the £5-6 mark I'd recommend it in a flash, but at £10 the price of Miku Flick severely hampers my ability to sing its praises - there simply aren't enough songs provided with the game to justify that cost by some measure, so hopefully SEGA will see fit to reduce the cost of the title in future or release an updated version with more music to play through.

Hardcore fans of either Miku herself or previous Vocaloid-related rhythm games will doubtless lap it up, and those with a sufficiently competitive streak to want to master every song to the best of their ability will find a lot of replay value inherent within that, but for the more casual portable gamer Miku Flick only realistically offers up a few hours of gameplay at most, and that simply isn't enough to justify the cost of the title.

7
A beautifully presented, well thought-out and fun introduction to Vocaloid rhythm games on iOS - if only it wasn't so expensive.
LATEST REVIEWS
13 Sentinels: Aegis Rim (Switch)