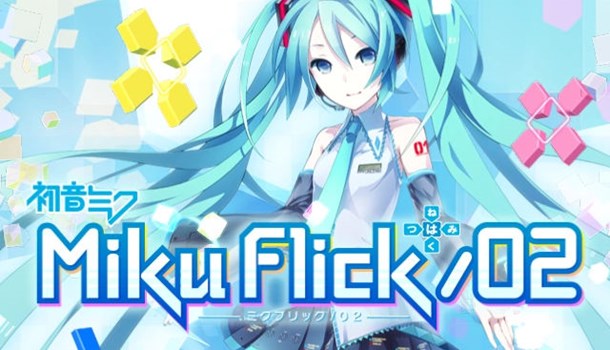 As fans of Vocaloid both musically and in terms of what that musical output has done for the rhythm game genre courtesy of Project DIVA on Sony's consoles, we were more than a little happy to see Miku Hatsune making the leap across to iOS devices courtesy of Miku Flick earlier this year.  Yes, it was decidedly over-priced, but the game's new mechanic to make use of touch screens was immensely satisfying and, more importantly, downright fun.  We clearly weren't the only ones to snap up Miku Flick either judging by the haste in which its sequel has made its way to iOS, so what does Miku Flick/02 add to the experience?

At its core, the game mechanics of this second game remain effectively the same as the first - pick a song and difficulty level, and the tune of your choice will play while backed up with a frequently colourful and occasionally downright gorgeous pre-rendered "music video".  As Miku Hatsune struts her stuff and sings, your job is to "flick" the highlighted notes by selecting the correct syllable or character from a keypad which takes up the bottom portion of the screen - the more impeccable your timing, the better your score, with a certain aptitude required to "clear" each track at its given difficulty level.  The game gives you a choice of keypad options, allowing you to use either a Japanese or fully Romanised character set - whichever option you choose, you're still given enough visual hints to be able to play the game relatively seamlessly.

As well as providing ten additional songs out of the box (with some great tracks included, providing a draw in its own right), there are also some other changes to give 02 a leg-up over the original Miku Flick.  For starters, higher difficulty levels provide sections where you have to tap the screen in time to notes which appear on-screen to mix things up from the usual flicking mechanic - not a huge or incredibly exciting change, but it fills those instrumental sections of songs where you're otherwise relegated to staring dumbly at the screen.  This second game also adds in duets, which aren't actually as exciting as they sound - these tracks feature two Vocaloid characters singing particular songs together, but as this makes basically no difference to the actual gameplay and offers you no option to select which characters you want to sing the song as you might in Project DIVA, it's effectively just an opportunity to spend some more time with the other featured Vocaloids beyond simply Miku herself.

The final big change, which really should have been in the original game, is the addition of downloadable content via in-app purchases - at the time of writing, there are two additional song packs containing three tracks each available at a shade under £3 (although unhelpfully they're only listed priced in Yen within the app), which seems a reasonable price to pay provided they're tracks that you like and will hopefully add more longevity to Miku Flick/02 than the first game.  Add in a new "Extreme Mode" to challenge the hardcore flickers (boy does that sound filthy) out there and the ability to record replays of your greatest triumphs, and you have a pretty solid upgrade for fans of both the game and the genre it represents.

Take my word, it's easy to become a fan of this game - once you've cleared your first song you'll find yourself hooked before you know it, and my "quick session to try out the game" quickly turned into a full afternoon of flicking my way through all three difficulty levels and trying to clear as many of the game's achievements as I could, before picking up one of the two DLC packs to play a little more.  There is a sneaking suspicion that the game is slightly easier this second time around to ensure people lean towards picking up more DLC songs sooner rather than later, but it could simply be that my experience with the first game smoothed the difficulty curve for this second game substantially.  The fact that I breezed through the game so quickly does ask questions of its long-term longevity, but if you're a perfectionist always looking to best your score (or beat your friends courtesy of Apple Game Centre integration) or don't mind dipping in to the odd DLC pack then at least it feels like a more substantial proposal than its predecessor.  Thankfully, the game also comes at a slightly cheaper price (DLC not included) to make it feel just that little bit more palatable when it pops up on your credit card bill.

As a whole, Miku Flick/02 is a definite improvement over the first game that has a little more to offer in every area and simply feels more polished as a whole - it still has a way to go to reach the luxurious levels of the Project DIVA franchise (and it probably never will given its host platform), and I wish there was an option to import Miku Flick tracks into this second game, but small quibbles aside this is a great-looking title that is unabashed fun to actually sit down and play.

8
Miku Flick/02 improves upon its predecessor in a number of ways, and feels like a more substantial title as a result. A worthy purchase for both Vocaloid fans and rhythm game lovers.
LATEST REVIEWS
13 Sentinels: Aegis Rim (Switch)