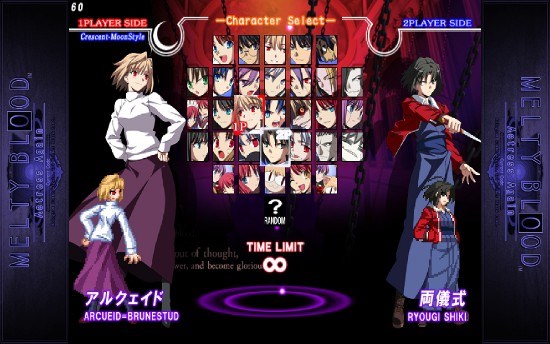 Melty Blood Actress Again Current Code (or Current Code, as I will call it from here on to save typing), is a strange release to say the least. It is a freshly translated version of a fighting game released as a DVD extra in December 2011, which itself is the latest update to a game that has releases stretching all the way back to 2002. It is also a game that I would have easily put money on never seeing a legitimate western release, so imagine my surprise when, alongside a grip of other games, Arc System Works announced last year that it was going to be released on Steam. With the game now firmly in hand, how does it shape up?

It is difficult to provide a story synopsis for Current Code because a) the story mode is a direct sequel to the events in earlier versions of Melty Blood, which itself is a pseudo-sequel to a visual novel not officially available in English and b) it is utterly bonkers and would require summarizing half of the Type-Moon Wiki to scratch the surface. In short; crazy things are happening in Misaki town and a colourful cast of characters, some of whom are supposed to be dead or not even exist in the first place, have come out of the woodwork to fight for survival.

The characters are core to any fighting game, and Current Code has an absurd range of them - no matter your preferred playstyle, you are likely to find a character or two that fits you down to the ground. Even the characters who have multiple entries (Tohno Akiha, a teenage girl who is part demon) have very different move sets across their versions (Standard, School outfit, and “Vermillion”). Even more than this, each character can be played in three different “Styles” which adjust the character move set and mechanics ever so slightly to benefit your choice of either combo or high-damage play. All of this likely sounds very scary to newcomers, but this is in no way required for casual play. Simply pick a character you think looks cool and mash it out, you’ll still have a great time. For high-level players there is an absurd amount to get your teeth stuck into and give the game an almost unbelievable amount of depth.One great point in the game's favour is that even with the massive cast it is shockingly well balanced - everyone has their own tools and mechanics to enjoy, and even a small handful of gag characters are still great fun to wind people up with.

At its heart, Current Code is a four-button fighting game. You have light, medium and heavy attacks, and the fourth button allows you an instantaneous shield against incoming attacks. A whole host of other fighting game regulars are here too - jumping, crouching, holding back to block attacks, special moves you can use by combining a joystick motion and an attack button. Beyond here are a clutch of additional mechanics - dashing in the air, a combo-escaping burst move, and two different levels of “Super mode” that allow you to both regenerate lost health and pull out your cinematic ultimate moves. The main thing to bear in mind is that all these tools are here if you want them, but are not critical to enjoying the game - Current Code rewards expert play, but is not shy of letting you “mash it out” and have a fun time doing so.

The main offline mode of the game is the story-based arcade mode - pick a character and plough through nine fights culminating in an absurd and borderline-unfair final boss. Throughout the storyline you get some voiced cut scenes with characters snarking at each other before the battle is joined - these are generally utterly absurd and good for a laugh, even if you don’t have a clue what is going on.

The game also has a robust training mode which provides all the options you could want for honing your skills, but stops short of providing a tutorial or “challenge” mode that would introduce you to the game mechanics or characters in greater depth. The community for the game is robust, and has over the years generated a number of tutorials that will ease you into the mechanics - this helpful NeoGAF thread is a good example.

The game also has local multiplayer, which works great. PC and Playstation-format arcade sticks are supported out of the box (at least those tried for this review) so you can jump right in. The game also supports keyboard input and this is also an acceptable experience - I have not tried using a 360 arcade stick with the game - let us know in the forums how it fares if you have one!

A final mechanical note is that the game has very low system requirements in order to run well, so is a great game even for an aged laptop or media centre PC. I currently have the game installed on a £60 Intel Atom (eww) PC stick (it's tiny!) and it runs at full frame rate in fights.

Current Code has online multiplayer and matchmaking, however this is where one of the core issues of the game lies. The netcode that comes baked into the game is functional but flaky at best. The netcode is delay-based, which generally means that the pace of the game is mutually slowed down so that both players get the same gameplay pace (taking into account latency and Internet speeds)  to prevent conflicts. This can lead to a game that feels sluggish, or has a very uneven pace to it, which makes playing the game markedly more difficult as it plays havoc with the timing of combos and reactions. It's functional, sure, but you do often feel like you are fighting against it, especially if you are matched with a distant player or someone with a poor connection. There is hope for the future in this arena however - while nothing is fully confirmed (and so cannot be factored into for this review), there are plans to integrate a rollback-based netcode solution into the game based on a fan-created mod for previous, non-Steam versions of the game. This would be a massive boon for the online multiplayer and make it a lot more viable overall.

The other core issue with the online play is that a large portion of the community have been playing this game for a long time across multiple versions, and at this point are pretty damn good. As such, you are likely to get bodied on a frequent basis when you play matchmaking. I know I do! Between both of these items you have a very vibrant community which has proven itself over the years and no small amount of adversity, and I would wager the community will continue for some time to come so there is little chance of the player base evaporating away.

Being a game originally created before the advent of HD gaming, Current code can be a shock to the system with 2D, SD sprites for characters. You still have HD backdrops and effects however, allowing for these to be clearly readable on the screen. Thankfully the sprites have aged well, with great animation and clear, immediately readable frames allowing them to “pop” off of the screen and be readily communicated to the player. Some of the newer characters added in later revisions of the game can look a little too “crisp” and detailed when viewed alongside their older brethren - Riesbyfe Stridberg, one of the most recent additions, looks to have more individual frames of animation to her, which gives her a slightly odd look. This aside, the whole game oozes style, both in the audio (more on this soon) and in the visual design - everything is designed to look cool and pop off the screen at you, and has its own slightly loopy look to it. Where else would you have a backdrop set in an underpass where “Cogito Ergo Sum” is spraypainted onto the wall? The game does offer some filtering/smoothing options if you would prefer a less “pixellated” look for the characters and backdrops, but I have to admit I find this look highly off-putting. Thankfully you can turn it on or off as you wish in the options alongside a host of other resolution and gameplay options.

My single favourite part of Current Code is the sound design, which is a tour de force. While there are a few bum examples, the wide range of background tracks are of a consistently high and tension-driving quality, lending a great backdrop to the action. I routinely listen to the soundtrack on its own, which is perhaps the highest compliment I can give it. The character select music in particular is critical to any self-respecting fighting game and the example here is a wonderful track that embodies the combined deadly seriousness and abject absurdity of the cast you are asked to select from, noodling all over the place while retaining a strong rhythm. The in-fight sound effects are equally great, providing clear and crisp sound cues which are pivotal to confident play in a fighting game. The one place where the sound Current Code truly shines is in the sound sting that both announces the winner after a fight - this is a punchy, brutal riff that feels like an aural fist-pump and it is honestly hard not to pop off every time this sound crops up. It feels great, especially if you are the winner. If not, well, this just gets you pumped up to try again.

Current Code is not without its issues (anaemic single player options, ropey netcode) but hot dang I love it to death and could not be happier that it is translated and available in a legitimate fashion. This is the game I come back to time and again to jump into for both a quick mess around and for long sessions on a quiet Sunday. It has personality in spades and playing it is a treat whether you are a scrub, high-tier, or anywhere in-between.

8
Probably the most fun you could have with a maid, a vampire and an arcade stick.
LATEST REVIEWS