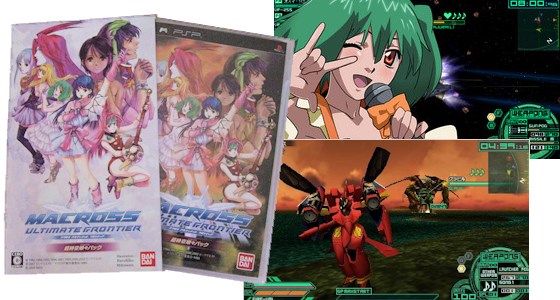 It doesn't seem like even 6 months since Macross Ace Frontier graced my life - the heady rush of piloting any one of a number of iconic mecha in space-dogfights worked beautifully and looked incredible, garnering it a healthy review score and a permanent place in my games collection. But it seems that Bandai Namco weren't satisfied and have returned with Ultimate Frontier, a game so huge that the UMD itself seems to be bursting at the seams.

The fundamental gameplay has returned - select a Macross series and work your way up through a series of challenges, upgrading your Valkyrie as you go. However, the developer has made some significant changes to the original formula, some of which are simple enhancements, others are mechanics overhauls that drastically change the way you'll play.

More Mecha
The game has not only increased the number of machines you can pilot, it's also changed the configuration options. You can now add battle packs to your mechs (all show-authentic) which enhance the abilities of your chosen ride. Take the "Fast Pack" that you can add to the YF19 from Macross Plus - equip this bad boy and you'll be zipping around the screen at unimaginable speeds - it's really, really cool.

The game has also incorporated more series into the mix - you can now select characters and Mecha from the canon Macross VFX game, and even the VFSS2 Valkyrie from Macross II, which is a treat and half for me considering Macross II was my introduction to the series, and I still maintain the Valkyrie's from this series are the prettiest mechs in any Macross series.

More Support
You can now select an additional partner (on top of your wingman) on your missions, which will grant you access to their special abilities. This works best when equipping an idol such as Ranka or Ishtar - pressing the X + O buttons will instigate a mini space concert, amplifying your mecha for the duration. It also looks very cool.

Better animation
The fighters have all been touched up and the graphics generally improved - just watch the YF19 fold it's wings when you hit the throttle. Magic!

More extras
The new game comes with a new store, the Nyan Nyan Item Shop. This allows you to buy background music, mecha, loading screens and much more. Unfortunately it's all in Japanese, making it useless to anyone who isn't fluent, sadly.

Gameplay refinements
The developers obviously spent a lot of time dissecting the original game and have created some key refinements to the basic gameplay mechanics. Two of the most obvious are found in the combat - you can now drop chaff behind you to distract missiles in Valkyrie mode, and in Gerwalk or Battroid mode you can actually target incoming missiles.

Missile lock now has 3 states - green, orange and red, which indicate the likelihood of a hit. The mecha handles much more responsively now too, so it feels a little less floaty when you're engaged in combat.

As if that weren't enough, MUF allows you to use your own music while playing the game. Pop the game in and it'll place a music folder on your memory stick. Pop your MP3's in here and you can select them in the game - it's a really great feature and just backs up the idea of how important music is to Macross.

Finally. you can switch the in-game view to "Flight Mode". This allows you to play a "simulator" view as found in games such as Ace Combat. It's an interesting addition, but I found it more of a novelty than anything else.

So there's a lot more to the game, but that in itself creates a few problems, all of which come down to one thing: the language barrier. With the first game it was possible to skip the text and go straight into the arcade gameplay, and while that's still possible with MUF, you're losing a lot more functionality this time around. Tutorial mode is next to useless, the shop is impenetrable and the Chronicle Files, which detail key events in Macross history, will be useless too. Help is available on sites such as GameFAQs, but until someone provides a full translation, you'll be playing at a disadvantage and without the benefit of getting everything the game has to offer. It's a crying shame, but what's left is still awesome, so it's an acceptable, if slightly painful, loss.

There are two flavours of the game currently available, plain and first print limited edition. I opted for the latter, and for my extra $50 I was rewarded with a very nice cover for the game packaging, alternative artwork featuring the girls of Macross (rather than the mecha) and a second video UMD which contains all the opening/closing videos from Macross through the ages (compete with an interview with Shoji Kawamori). To be honest, it really isn't worth the extra cash unless, like me, you're a fervent collector of rare games merchandise.

In the end, this is a game that delights on so many levels that, language barrier aside, it's really pretty flawless. If you're a Macross fan with a PSP it's damn near essential - where else can you engage the Vajra flying rings around the Battle Frontier avoiding streams of pretty missiles aimed at your ass?

9
A collectors dream, and probably the finest Macross (or Mecha) game on the PSP. Or any system.