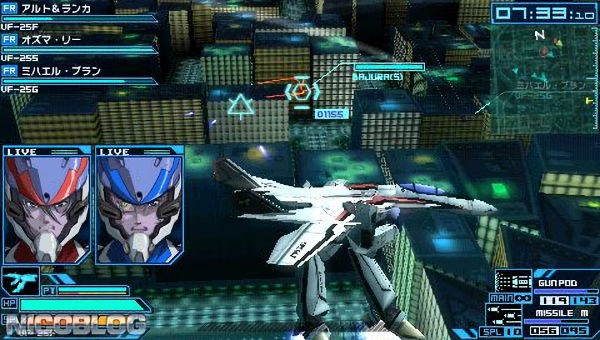 When I first saw the screenshots for Ace Frontier, I had very high hopes. Firstly, this is being produced by Bandai Namco, who are responsible for my favourite PSP game, Gundam SEED: Rengou vs ZAFT. Like Gundam, Ace Frontier is a mech-on-mech fighting title, with 3 game types - Campaign, Freeplay and Multiplayer. We'll get to each of those in a later.

The game works as an arena battle. Your ship is dropped into an area and you fight for survival. The big difference between SEED and Ace Frontier is the mech. Where Gundam kept you grounded, with only a boost capability, Macross has the famous Valkyries, which can transform from robot to jet, with "Gerwalk mode" in-between. This leads to far more tactical battles, as you'll need to use all three modes, in the right circumstances, to win a battle. Where the jet mode is fast, Gerwalk is agile when firing but easier to hit, meaning you'll need to switch between both in an aerial dogfight. When dealing with ground troops, you'll need to convert to robot mode and use ground cover. In the middle of a heated battle, the thrill of flying into a combat zone, landing, firing and taking off again is just superb.

You have 3 main forms of attack - your cannon and missiles are available in all modes, but only Gerwalk and robot mode can use powerful melee attacks. Holding down the circle button locks multiple missiles on one or more targets, and square is your cannon. X handles boost and triangle button handles melee attacks. The Right shoulder button switches target lock on and, from what I can tell from the menu (I don't read Japanese) the Left shoulder button works in conjunction with other keys. The nub transforms the mech, which is fiddly at first, but becomes second nature after a while.
Each pilot has a special ability which is accessed by pressing X and Circle together - this works much like Gundam's "SEED mode", but where Gundam just gave you unlimited energy for a short time, Macross provides a whole range of abilities for your pilot, which can be selected on the menu screen when playing Campaign mode.

So lets look at the game types, starting with Campaign:

Like the PSP Gundam games, there is a career mode. First you have to choose a timeframe - Original Macross, Macross Plus, Macross 7 or Macross Frontier. You'll only fight mechs from your chosen timeframe, and you'll only have access to that era's Valkyries.
Macross Plus is the most familiar to me, so I've been playing that. Initially you'll have a basic Valkyrie which can be upgraded from points earned in missions, but you'll also earn "Prizes" which can be anything (literally, I can't read the explanations!) but it is obvious when you get a new mech. Tearing around in the YF-19 is everything it should be, and you get a real feeling of power when you make your upgrades. You'll play through a number of missions which require different skills. Some will be battle missions, others a test of your skill with each mode of your chosen mech. Once you get going and have a basic understanding of the menus, it becomes extremely addictive.

Which brings me to the main issue with the game - while the Japanese menus can be worked through with patience (icons help a great deal here) a lot of the game controls are a mystery. Power Up icons are not very clear, nor is their purpose (which should be resolved when someone writes a translation). Initially though, Campaign mode could be a lot deeper than it appears.

Freeplay:
Here you can play any mission with any Valkyrie with any background music. The more you unlock through campaign mode, the more you'll have to play with here.

Multiplayer:
Kinda what it says on the tin - up to 4 players can take part in missions.

So are there any issues? Well, if things get really intense the framerate can occasionally drop, but to be honest (and playing from a memory stick if you don't want to carry the precious UMD around) it's not much of a hinderence.

The Japanese text is a minor issue, and although the game really opens up when you understand the full extent of the power-ups on offer, you'll get by just fine with powering up your Valkyrie of choice and picking your favourite support staff.

All in, Macross Ace Frontier is an absolute winner for Macross fans. By far the most comprehensive Macross game on any platform to date, it's yet another reason for investing in a PSP and buying your games direct from Japan!

9
Translate the menus and this a 10. Pure joy to play and awesome to watch. Hats off once more to Bandai Namco.