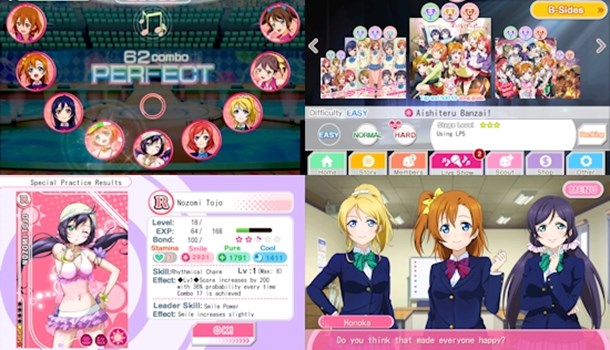 Sunrise's Love Live has taken fandom by storm over the past couple of years, fighting its way into the hearts of many in spite of its place in the increasingly crowded idol anime genre. With a popular setting, characters and music, the series is also perfectly placed as a vehicle for its very own rhythm game, and after its release in Japan a year ago we now have a free-to-play game based around the franchise to check out on both iOS and Android devices, in the form of Love Live! School Idol Festival.

If the phrase "free-to-play" has sent you running for the hills far from anywhere with a mobile data signal, then we really don't blame you, and of course School Idol Festival contains all of the recognisable systems of this model - micro-transactions and an "energy" system that slowly refills over time to gate your progress (unless you pay to circumvent it temporarily, of course).

Let's not get ahead of ourselves however and start with the basics - School Idol Festival begins by having you select your leader from the group of nine girls which make up μ's - the "school idol" group which the series follows - who by way of a story then puts you, the player, in charge of rehearsals and live events for the group. Rather than simply looking after the show's main group of characters however, you're instead provided with a group of all-new students with various attributes (summarily broken down into Smile, Cool and Pure ratings) to practice with to increase these attributes and then perform songs at live events to gain money and "friend points" to continue this cycle of training and live events, levelling up to unlock further songs and more of the game's story mode.

The game's practice system is perhaps its oddest facet - effectively, you take the idol you want to level up, and choose other characters who you've procured via either completing live events or scouting for the idol to "devour". This isn't how they talk about in the game's own parlance (the other characters are "practice partners"), but as those individuals disappear forever more upon completing the practice session and some of their stats transfer to the main idol performing the practice, it's hard not to imagine some kind of horrific idol cannibalisation is taking place! Each idol is represented by a character card, and if you own two of the same card you can perform "special training" to create a new version of this character kitted out ready to perform and with a higher level cap - equally importantly, you can now work towards maxing out the "bond" with this idol by selecting her in live events, which will in turn unlock a brief story for them and give you another reward to boot.

Once you're done with practice, you can jump into a live event provided you have enough LP (Love Points) to do so - choose a song and difficulty level, pick your team of nine idols (you can create up to five pre-defined teams to choose from to make picking the right group to match each song's characteristics), and play a simple yet satisfying rhythm game based around that track. The idea here is simple - tap the nine characters in time as circles spread outwards from the top of the screen towards them, timing these taps to the music and position of these circles, holding certain "notes" and tapping multiple characters at the same time as required, with your performance rewarded based on how well you do and giving you money, new idol cards and Friend Points as a result. The game itself also features a "stamina bar" that depletes if you miss notes or otherwise perform poorly, with better characters offering more stamina amongst other benefits.

In any other rhythm game it would be a case of "rinse, repeat, unlock new songs, repeat some more, enjoy", but of course this is where School Idol Festival's free-to-play mechanics come into play. If you run out of Love Points, you can either use a Love Gem to recharge these points fully, or wait for them to recharge at a rate of one point every six minutes - needless to say, you can purchase Love Gems at a rate of one for a little over 80p or five for less than £3. Love Gems also allow you to scout for "honour students", which gives you a guaranteed rare card (or better) featuring the show's main cast of characters which only very rarely turn up during normal scouting attempts that are paid for using the more readily available Friend Points. These rare cards invariably feature special powers that increase your score and restore stamina during live events while also boasting some impressive stats, making them invaluable to your progression.

In fairness, Love Gems do turn up reasonably frequently in the game at no extra cost - as daily login bonuses; from completing parts of the game's story mode which unlocks as you level up or max out a character's bond; or as other "presents" on character's birthdays and the like - but the game is always keen to remind you that you're just a Love Gem away from refilling your Love Points, refilling your stamina if you fail a track mid-song, or picking up a sweet rare card that will make the game easier. As part of this review, we purchased a total of fifteen Love Gems in three batches of five, and we really can't overstate how much easier it made the game - the special abilities boasted by the rare characters we acquired at a cost turned our A and B-rank runs through songs into S-rank ones, we levelled up far quicker, and on one occasion we paid for Love Gems ostensibly to complete a track that we'd failed mid-song on hard level; the epitome of "pay to win", and an experience which left us feeling both deeply unsatisfied and more than a little dirty.

How egregious this element of the game is depends on how patient you are - without paying for Love Gems, you can expect some long, long sessions of "grinding" through a limited number of songs to chip away until you unlock some more content, and you'll need to be willing to pick up the game two or three times away to make full use of the Love Points you have. Now, all of the music in School Idol Festival is great and hugely catchy, but after you've heard and easily cleared the same song twenty times (which is why there are rewards for clearing songs on a single difficulty level 30 times!) you may well find yourself losing the will to live, or reaching tantalisingly for the credit card that could get you over the current speed bump upon which you're trapped relatively easily.

This isn't necessarily helped by the game's story mode, which is a "story" in the loosest possible sense - yes, it's fully voiced by the anime's voice cast (aside from any side-stories featuring non-anime characters) and it enjoys the same frivolous nature as its source material, but any story vignettes are decidedly short and - if we're honest - pretty boring. You'll find yourself maxing out bonds and hungering to level up simply in the hope of unlocking more songs rather than to enjoy the story, that much is for certain, and again you'll often find yourself with a vast gulf of repetition before that elusive next song appears, before you're suddenly treated to two at once like some kind of idol London bus.

Story aside, School Idol Festival is visually very appealing - the rhythm game itself is simple but effective to look at and performs and plays in a satisfying way, and the game's overall UI is also solid once you know your way around. Perhaps the best element of the game is its character cards however - all of the unique character designs are eye-catching, and the main members of μ's sport some colourful art too, all of which can be viewed in full-screen if you so wish. Beyond unlocking more songs, there's definitely a certain lure to nabbing and working with your favourite characters beyond their mere stats and abilities, and coupled with its selection of great tunes (once you can get to them!) you have two elements that will keep you coming back for more. Add in special events and leaderboards, and those with a competitive streak will be kept satisfied too.

Overall then, School Idol Festival is a genuinely good game - if only there was an option to buy the game outright and avoid all of the jumping through barriers erected to tempt you into buying Love Gems, then it could have been a great one. This isn't the most frustrating implementation of a free-to-play model you'll ever see, but it does require either a lot of patience or deep pockets unless you enjoy the idea of playing the same few songs over and over to unlock more content, and even the fact that the game's mechanics are fun at heart won't entirely mitigate that.

7
School Idol Festival is a fun game, but that sense of fun can be obscured by its free-to-play mechanics a little more frequently than we'd like.
LATEST REVIEWS
13 Sentinels: Aegis Rim (Switch)